Work-Bench is itself like a venture capital investment startup. A scrappy operation run by just five enterprise industry veterans, it defies convention in a number of ways, including setting up shop in New York City. While it’s based in New York, the company will invest anywhere in the country, writing checks for $1.5 million for Seed 2 and Series A investments.

Work-Bench’s philosophy centers around a sales approach and giving their startups entrée into some of the biggest companies in the country, many of which, not coincidentally, are based near their offices.

The company starts by trying to understand specific enterprise customer pain points, even before they send a founder in to pitch an executive. The startup founders are judged and guided by their ability to sell. In fact, one of the founders, Jonathan Lehr, says even before they invest in a company they will send them to pitch a couple of customers and take advantage of that two-way feedback channel as a way to understand the startup’s selling skills.

“Instead of starting with whiz-bang tech like a lot of West Coast VCs do, by starting with the problem and where budget dollars are being allocated, when we’re looking at companies from an investment perspective it really helps us connect all the dots a little a lot better. That’s because on the one hand the corporate executive is getting a solution to a pain point from the startup, and the startup founders are getting an introduction to the right stakeholder at the right time for them at the right organization,” Lehr told TechCrunch. 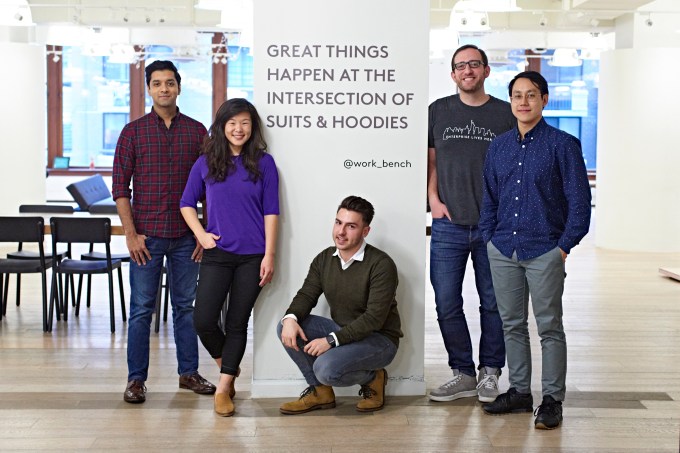 Work-Bench has set up their headquarters as space for hosting regular events that help introduce founders to key people in the community and learn about different subjects, such as writing a successful RFP, negotiating contracts and setting up a successful proof of concept (PoC). They also have work spaces where founders from the portfolio companies can interact on a daily basis and get direct feedback from the Work-Bench principals, who run a truly hands-on operation.

It seems to have worked. Among the enterprise startups funded with their initial fund were Dialpad, Tamr, Cockroach Labs and CoreOS, which was sold to Red Hat for $250 million in January. In all, they invested in 17 companies in the first fund.

The second fund is already under way with nine investments so far, including Scytale, a security and identity protocol startup; Algorithmia, which is working on DevOps for AI; and Catalyst, a customer success platform.