The Hang Seng China Enterprises Index of Chinese companies listed in Hong Kong was off 2.76 percent as of 12:40 p.m. On the Mainland side, the CSI 300 index of the top 300 stocks trading in Shanghai and Shenzhen fell 2.1 percent. The U.S. stock market is closed Wednesday to honor former U.S. President George H.W. Bush. 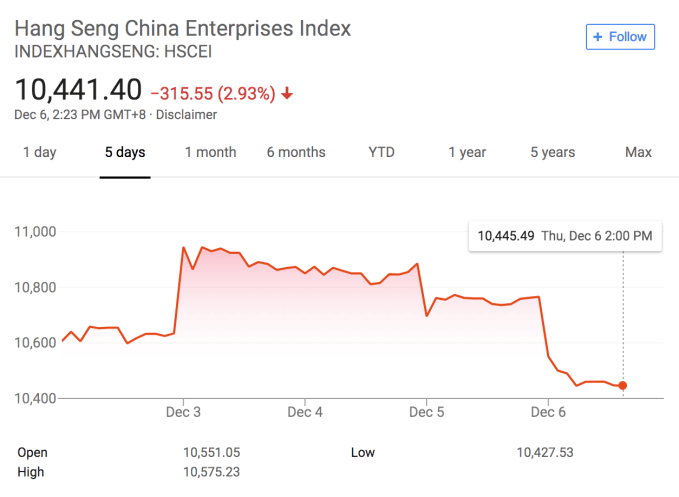 The crash arrived after Canadian officials detained Meng, daughter of Huawei’s founder and chief executive officer Ren Zhengfei, on suspicion that Huawei has violated American sanctions on Iran. Meng is facing extradition to the U.S.

Shares of Huawei’s main rival ZTE nose-dived nearly 6 percent in Hong Kong by midday. Meng’s news also hit the suppliers of employee-owned Huawei across the Asian stock markets. Among the worst performers is Shennan Circuit, which slipped nearly 10 percent in Shenzhen as of this writing. 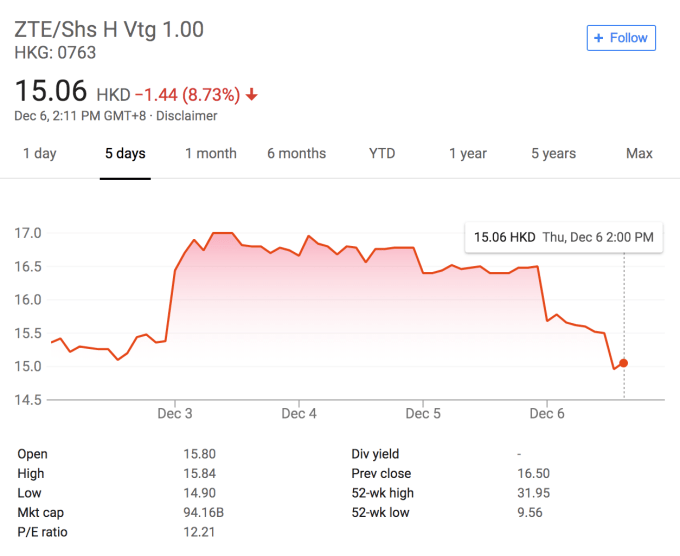 Huawei and its main rival ZTE have been targets of the U.S. government that worries about the alleged ties between the telecom equipment makers and the Chinese government. The U.S.’s ban on ZTE sparks concerns that Huawei will face a similar fate. In April, the U.S. Department of Commerce announced a seven-year ban that would restrict American component makers from selling to ZTE, which in 2017 pleaded guilty to violating sanctions on Iran and North Korea.

Chinese stocks had been on a downward trend prior to Meng’s arrest as a result of rising U.S. tariffs over the last few months. In October, the Shanghai benchmark index dropped to a four-year low.

Updated with charts on HSCEI and ZTE.