No one wants to post silly, racy or vulnerable Stories if they’re worried their boss, parents and distant acquaintances are watching. So to get people sharing more, and more authentically, Instagram will let you share to fewer people. Today after 17 months of testing, Instagram is globally launching Close Friends on iOS and Android over the next two days. It lets you build a single private list of your best buddies on Instagram through suggestions or search, and then share Stories just to them. They’ll see a green circle around your profile pic in the existing Story tray to let them know this is Close Friends-only content, but no one gets notified if they’re added or removed from your list that only you can view. 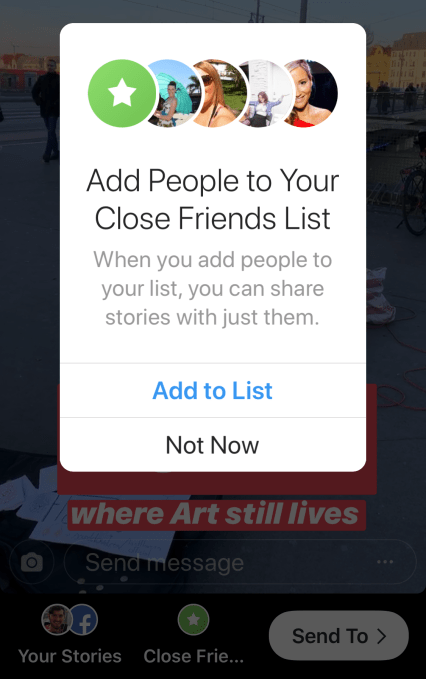 “As you add more and more people [on any social network], you start not to know them. That’s obviously going to change the things that you’re sharing and it makes it even harder to form very deep connections with your closest friends because you’re basically curating for the largest possible distribution,” said Instagram director of product Robby Stein, who announced the news onstage at TechCrunch Disrupt Berlin. “To really be yourself and connect and be connected to your best friends, you need your own place.”

I spent the last few days demoing Close Friends and it’s remarkably smooth, intuitive and useful. Suddenly there was a place to post what I might otherwise consider too random or embarrassing to share. Teens already invented the idea of “Finstagrams,” or fake Instagram accounts, to share feed posts to just their favorite people without the pressure to look cool. Now Instagram is formalizing that idea into “Finstastories” through Close Friends.

The feature is a wise way to counteract the natural social graph creep that occurs as people accept social networking requests out of a sense of obligatory courtesy from people they aren’t close to, which then causes them to only share blander content. Helping people express their wild side as must-see content for their Close Friends could drive up time spent on the app. But there’s also the risk that the launch creates private echo sphere havens for offensive content beyond the eyes of those who’d rightfully report it.

“No one has ever mastered a close friends graph and made it easy for people to understand,” Stein notes. The path to variable sharing privacy winds through a cemetery. Facebook’s “Lists” product struggled to find traction for a decade before being half-shut down. Google+’s big selling point was “Circles” for sharing to different groups of people. But with both, users found it too boring and confusing to make a bunch of different lists they could share to or view feeds from. Snapchat launched its own Groups feature two months ago, but it’s easy to forget who’s in which list and they’re designed around group chat. Most users just end up trying their best to reject, unfollow or mute people they didn’t want to see or share with. The nearest anyone came to getting it right was Path, which had its own Inner Circle list with a similar star logo, but that app never achieved ubiquity. 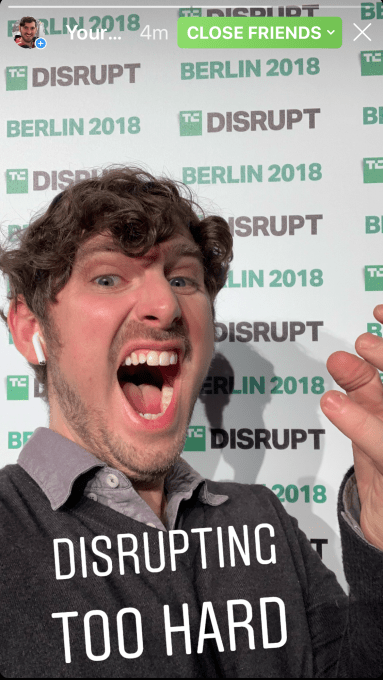 Now after almost 15 years of Facebook, 12 years of Twitter, eight years of Instagram and seven years of Snapchat, that strategy has failed for many, leading to noisy feeds and a fear of sharing to too many. “People get friend requests and they feel pressure to accept,” Stein explains. “The curve is actually that your sharing goes up and as you add more people initially, as more people can respond to you. But then there’s a point where it reduces sharing over time.”

So Instagram chose to build Close Friends as just a single list in hopes that you won’t lose track of who’s part of it. As the feature rolls out today, there’ll be an explainer Story from Instagram about it in your tray, you’ll get walked through when you hit the Close Friends button on the Story composer, and there’ll be a call out on your profile to configure Close Friends in the Settings menu. You’ll be able to search for your close friends or quickly add them from a list of suggestions based on who you interact with most. You can add or remove as many people as you want without them knowing, they just will or won’t see your green circled Close Friends story. “We’re protecting you and your right to share or not share to certain people. It gives you air cover,” Stein tells me.

From then on, you can use the Close Friends shortcut in the Stories composer to share it with just those people, who’ll see a green “Close Friends” label on the story to let them know they’re special. Instagram will use the signal of who you add to help rank and order your Stories tray, but it won’t automatically pop Close Friends Stories to the front. When asked if Facebook would use that data for personalization too, Stein told me, “We’re the same company,” but said using it to improve Facebook is “not something that we’re actively working on.”

There’s no screenshot alerts, similar to the rest of Instagram Stories, but you won’t be able to DM anyone someone else’s Close Friends Story. That’s it. “We haven’t invented any new design affordances or things you need to know,” Stein beams. For now it’s meant for user profiles, but publishers, social media celebrities and brands would probably love ways to build fan clubs through the feature. Perhaps Instagram would even allow creators to charge users to be admitted to Close Friends. If not, some savvy influencers will probably do it anyways as they try to make Instagram more like Patreon. 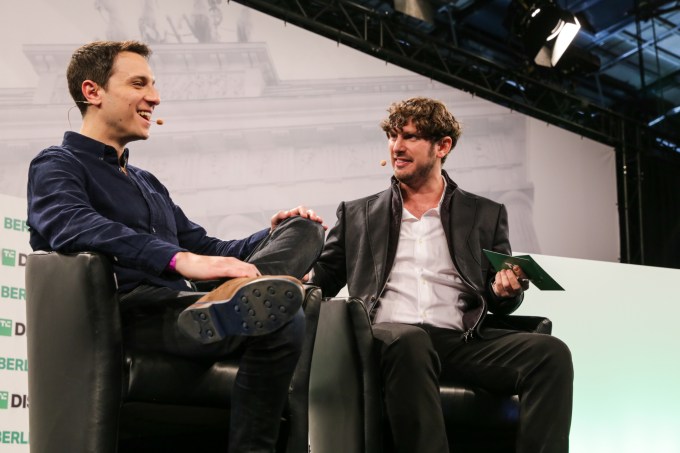 The one concern here is that Close Friends could create little bunkers in which people can share objectionable content without consequence. It’d be sad to see it harbor racism, sexism or other stuff that doesn’t belong anywhere on Instagram. Stein says that because you’re talking with friends instead of strangers on a Reddit, “it self regulates what it’s used for. We haven’t seen a lot of that usage in the testing that we’ve done. It’s still a broadcast channel and it doesn’t generate this group discussion. It doesn’t spiral.”

Overall, I think Close Friends will be a hit. When it started testing a prototype called Favorites in June 2017 it worked with feed posts too, but Instagram decided the off the cuff posts wouldn’t fit right next to your more widely broadcasted highlights. But confined to Stories, it feels like a natural and much-needed extension of what Instagram was always supposed to be but that’s gotten lost in our swelling social networks: giving the people you love a window into your life.