The social media singularity continues with the arrival of Snapchat Stories-style slideshows on LinkedIn as the app grasps for relevance with a younger audience. LinkedIn confirms to TechCrunch that it plans to build Stories for more sets of users, but first it’s launching “Student Voices” just for university students in the U.S. The feature appears atop the LinkedIn home screen and lets students post short videos to their Campus Playlist. The videos (no photos allowed) disappear from the playlist after a week while staying permanently visible on a user’s own profile in the Recent Activity section. Students can tap through their school’s own slideshow and watch the Campus Playlists of nearby universities.

LinkedIn now confirms the feature is in testing, with product manager Isha Patel telling TechCrunch “Campus playlists are a new video feature that we’re currently rolling out to college students in the US. As we know, students love to use video to capture moments so we’ve created this new product to help them connect with one another around shared experiences on campus to help create a sense of community.” Student Voices was first spotted by social consultant Carlos Gil, and tipped by Socially Contented’s Cathy Wassell to Matt Navarra. 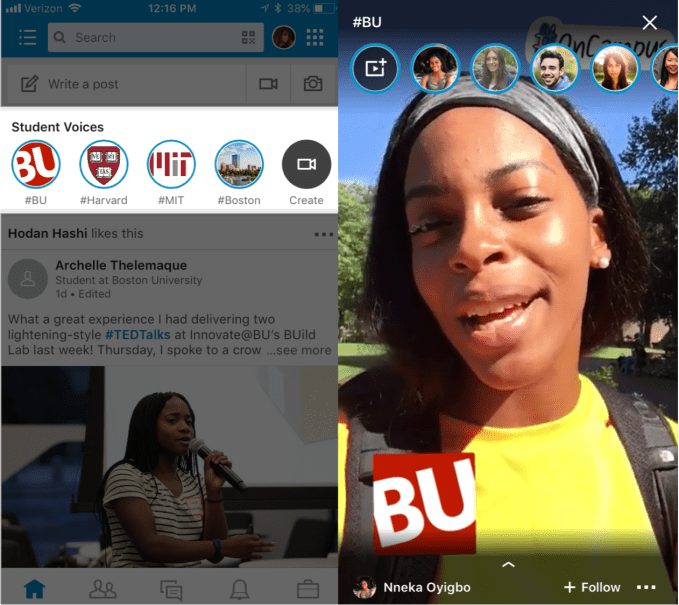 A LinkedIn spokesperson tells us the motive behind the feature is to get students sharing their academic experiences like internships, career fairs and class projects that they’d want to show off to recruiters as part of their personal brand. “It’s a great way for students to build out their profile and have this authentic content that shows who they are and what their academic and professional experiences have been. Having these videos live on their profile can help students grow their network, prepare for life after graduation, and help potential employers learn more about them,” Patel says.

But unfortunately that ignores the fact that Stories were originally invented for broadcasting off-the-cuff moments that disappear so you DON’T have to worry about their impact on your reputation. That dissonance might confuse users, discourage them from posting to Student Voices or lead them to assume their clips will disappear from their profile too — which could leave embarrassing content exposed to hirers. “Authenticity” might not necessarily paint users in the best light to recruiters, so it seems more likely that students would post polished clips promoting their achievements… if they use it at all.

LinkedIn seems to be desperate to appeal to the next generation. Social app investigator and TechCrunch’s favorite tipster Jane Manchun Wong today spotted 10 minor new features LinkedIn is prototyping that include youth-centric options like GIF comments, location sharing in messages and Facebook Reactions-style buttons beyond “Like” such as “Clap,” “Insightful,” “Hmm,” and “Support.”

When users post to Student Stories, they’ll have their university’s logo overlaid as a sticker they can move around. LinkedIn will generate this plus a set of suggested hashtags like #OnCampus based on a user’s profile, including which school they say they attend, though users can also overlay their own text captions. Typically, users in the test phase were sharing videos of around 30 to 45 seconds. “Students are taking us to their school hackathons, showing us their group projects, sharing their student group activities and teaching us about causes they care about,” Patel explains. You can see an example video here, and watch a sizzle reel about the feature below.

For now, LinkedIn tells me it has no plans to insert ads between clips in Student Voices. But if the Stories content assists with discovering and vetting job candidates, it could make LinkedIn more unique and indispensable to recruiters who do pay for premium access. And if these Stories get a ton of views simply by being emblazoned atop the LinkedIn feed, users might return to the app more frequently to share them. As we’ve seen with the steady increase in popularity of Facebook Stories, if you give people a stage for narcissism, they will fill it.

LinkedIn’s start as a dry web tool for seeking jobs has made for a rocky transition as it tries to become a daily habit for users. Some tactical advice in its feed can be helpful, but much of LinkedIn’s content feels blatantly self-promotional, boring or transactional. Meanwhile, it’s encountering new competition as Facebook integrates career listings and job applications for blue-collar work into its social network that already sees over a billion people visit each day. It’s understandable why LinkedIn would try to latch on to the visual communication trend, as Facebook estimates Stories sharing will surpass feed sharing across all apps in 2019. But Student Voices nonetheless feels unabashedly “how do you do, fellow kids?” 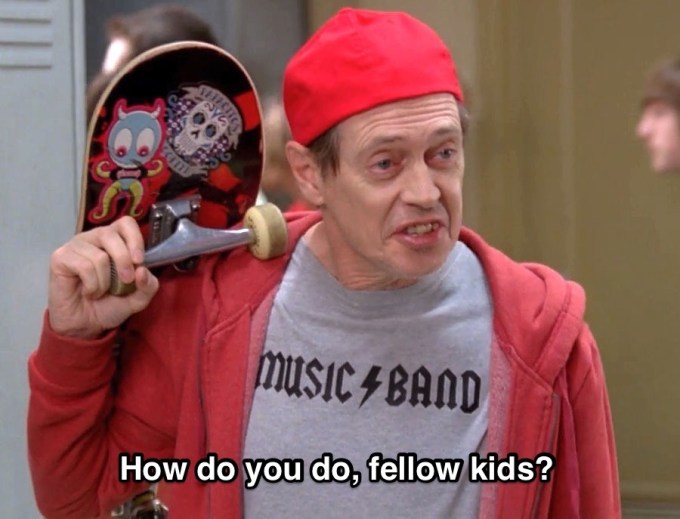