BuzzFeed News is giving readers a new way to support its journalism — by paying a monthly or yearly fee.

BuzzFeed might not seem like the most obvious publication to ask readers for financial support, as it doesn’t really have the high-minded appeal of (say) NPR or The New Yorker. However, the company has been working to establish a separate identity for its team focused on real journalism (as opposed to the quizzes and other entertainment for which BuzzFeed is known). In fact, it launched a separate website for BuzzFeed News a few months ago.

In August, BuzzFeed News started giving readers a way to make one-off donations of between $5 and $100. It says the average donation was more than $20, with some readers asking for a way to support the organization on an ongoing basis.

So today, it’s launching a recurring membership program. For $5 a month, readers will receive members-only emails highlighting the latest scoops and taking them behind the scenes of BuzzFeed reporting. For $100 a year, they’ll also receive a BuzzFeed News tote bag. 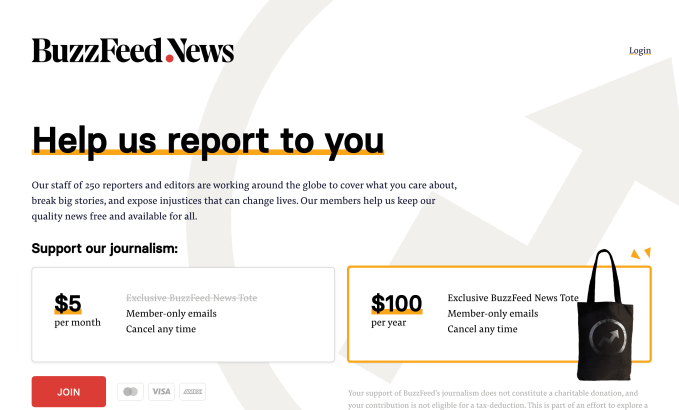 The memberships are available internationally, but you can only get a tote bag if you’re in the United States.

BuzzFeed reportedly missed its revenue target last year by as much as 20 percent, so it’s not surprising that the company is looking beyond advertising for ways to make money. However, in an email to the BuzzFeed team, Global News Director Lisa Tozzi said, “A membership program takes time to build, and we don’t expect it to be a huge portion of BuzzFeed’s revenue in 2019. That’s why we’re investing in it now and hope to see it contribute more to our work over time.”

And if you’re worried that this might be setting the stage for a paywall or meter on BuzzFeed News stories, Tozzi said flatly, “This is not a prelude to any sort of paywall.”