Google has released its annual Thanksgiving traffic and search trends report, created by analyzing data from last year’s holiday season. It breaks down the best and worst times to travel by state and also throws in information about when popular places, like grocery and liquor stores, are the most crowded. Even if you can’t avoid Thanksgiving travel hell, Google’s interactive site will at least let you know what level of hell to expect by showing traffic stats by state, day, and time.

Here are some highlights: not surprisingly, Wednesday between 3PM to 4PM is when traffic is at its most abysmal during Thanksgiving week, but it becomes significantly less packed by 6AM on Thursday, Thanksgiving Day. For return trips, Google’s report advises leaving Friday or Sunday morning, since most people don’t hit the road until the afternoon. 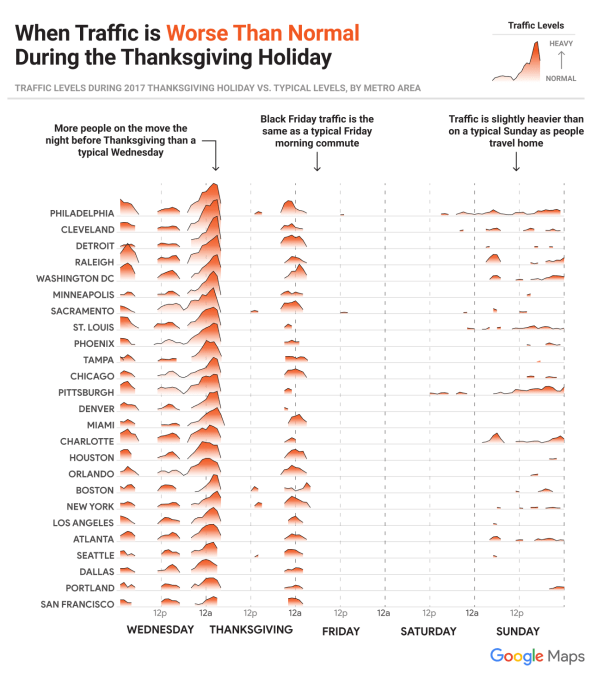 The crowds in bakeries and grocery stores are at their peak the afternoon before Thanksgiving as shoppers grab last-minute supplies. Trips to liquor stores also jump around the same time as people fortify themselves for the next day. On Black Friday, shopping centers are obviously crowded, but many people also chose to spend the afternoon catching a movie.

If you think you can avoid crowds by doing some early Christmas tree shopping or renting an all-terrain vehicle instead, you might want to think again. Using historic data from searches across the United States, Google found that tree farms, electronic stores, ATV rental services, and video game stores are among the “most uniquely popular stops” on Thanksgiving (apparently people enjoy views from high places the day before Thanksgiving, when rollercoasters and scenic overlooks are popular).

Google also shows the most popular search terms during Thanksgiving week last year on a state-by-state level. In California, it was “city courthouse,” while in Pennsylvania people looked up “electric vehicle charging.” Montanans searched for “breweries,” South Dakotans Googled “American restaurant,” and people in Nevada wanted to know more about “parking garages.” Meanwhile, “home improvement store” hit the top of the list in Nebraska, North Dakota, and Iowa.