Chinese internet giant Tencent bounced back from a disappointing previous quarter, but for once the company didn’t have its gaming business to thank.

Tencent may be best known for conjuring up WeChat, China’s most popular messaging platform, but its revenue is driven by its gaming business, which includes top smartphone titles and a thriving PC unit. Its Q3 results, announced today, however, saw its gaming income slacken and other units, including a booming advertising business, step up.

The firm posted a net profit of RMB 23.3 billion ($3.4 billion) on total revenue of RMB 80.6 billion ($11.7 billion), up 30 percent and 24 percent, respectively. Profit growth was back on track, mainly thanks to increased net gains from investments, including a blockbuster IPO of Meituan in September.

Advertising increased by 47 percent and generated 20 percent of total revenues, marking the first time that the segment has reached that mark. The jump is in part a result of strong ad revenue growth on Tencent’s two main chat apps, WeChat and QQ.

These changes are a sign that Tencent has begun to aggressively monetize its massive network of social networking users. As of September, Tencent had 1.08 billion monthly active users on WeChat worldwide, though the app’s spectacular growth has slowed to 2.3 percent quarter-to-quarter. 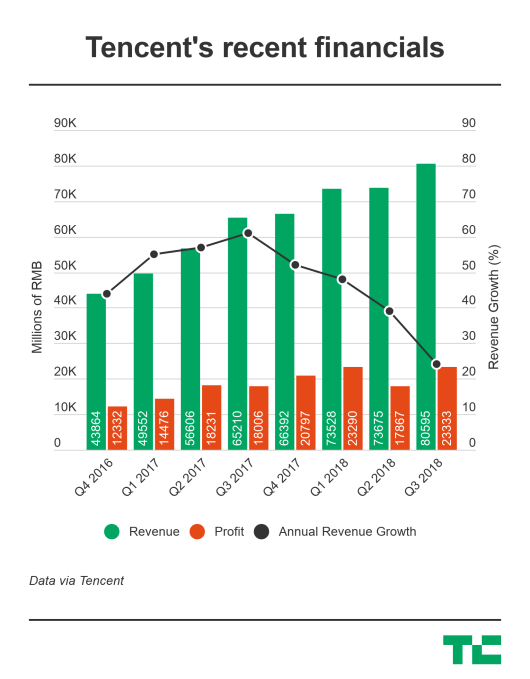 Tencent underwent an internal reorganization in October that saw it merge several business groups, which have resulted in a more unified system of advertising sales platforms, the company explained in today’s report.

“Our advertising, digital content, payment and cloud services sustained robust activity and revenue growth, and now account for the majority of our revenue,” chairman and CEO Pony Ma said in a statement.

In contrast, games, which have been Tencent’s major revenue driver for years, slid four percent this quarter due to a prolonged freeze on gaming licenses in China. The firm claims it has 15 games with monetization approval in its pipeline, which means that gaming revenues could rebound when it publishes those titles, although it said the same in the previous quarter, so a lack of progress is fairly ominous.

The firm also pointed out that while mobile games continued to fuel revenue growth, PC games suffered a decline.

When asked about the situation with gaming licenses on a call with investors, Tencent President Martin Lau said the company is “waiting for the government to start the approval process.”

Tencent appears to have found a potential interim solution, which involves allowing third-party publishers who secured a license before the freeze to publish games through its platform, but of course, that has limited use.

While games are the hot topic, Tencent was keen to push the story of its cloud computing business, which it said is a key to widening its focus into IOT and other areas.

Emboldened by the reorganization in October, which seemed aimed at shifting Tencent from a consumer-facing internet company into one that’s increasing serving industries, the firm said its cloud business more than doubled its revenue year-on-year. There was no raw revenue figure released for the quarter, but the company did disclose that the cloud unit has brought in more than RMB 6 billion, $860 million, over the last three quarters.

Furthermore, cloud computing and payment-related services helped its “Others” business increase its revenue 69 percent year-on-year to reach RMB 20.3 billion, $2.92 billion, for the quarter.