The kids in Madrid’s El Retiro Park are loving their new on-demand joyriding toys. Lime launched its scooters in the Spanish capital this summer.

Spending a weekend in the city center last month the craze was impossible to miss. Scooters parked in clusters vying for pay-to-play time. Sometimes lined up tidily. All too often not.

The bright Lime rides really stood out, though it’s not the only brand in town. Scooter startups have been quick to hop on the international expansion bandwagon as they gun for growth.

Grandly proportioned El Retiro clearly makes a great spot for taking a scooter for a spin. Test rides beget joyrides, and so the kids were hopping on. Sometimes two to one.

The boulevard linking the Prado with the Reina Sofia was another popular route to scoot.

While a busy central bar district was a hot ride-ditching spot later on. Lines of scooters were vying for space with the vintage street bollards.

The appeal was obvious: Bowl up to the bar and drink! No worries about parking or how to get your ride home afterwards. But for Saturday night revellers there was suddenly a new piece of street furniture to lurch around, with slouching handlebars sticking up all over the place. Anyone trying to navigate the pavement in a wheelchair wouldn’t have had much fun.

In another of Spain’s big tourist cities the scooter story is a little different: Catalan capital Barcelona hasn’t had an invasion of on-demand scooter startups yet but scooters have crept in. In recent years locals have tapped in of their own accord — buying not renting.

Rides are a front-of-store sight in electronics shops, big and small — costing a few hundred euros. Even for a flashy Italian design… 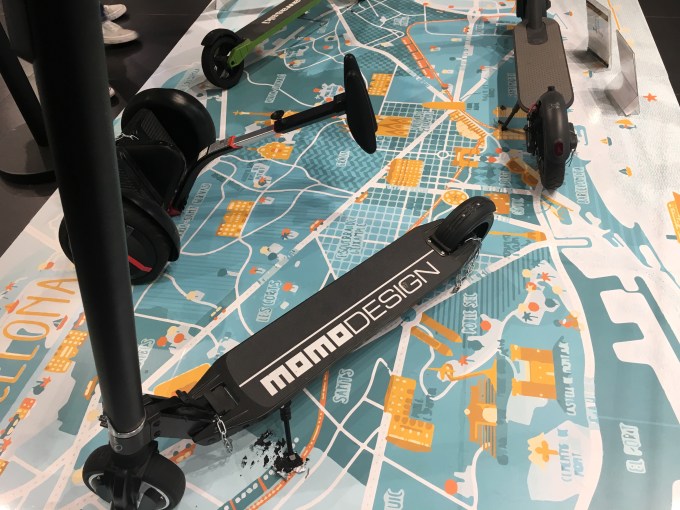 Take a short walk in one of the more hipster barrios and chances are you’ll pass someone who’s bought into the craze for nipping around on two wheels. There’s lots of non-electric scooters too but e-scooters do seem to have carved out a growing niche for themselves with a certain type of Barcelona native.

Again, you can see the logic: Well-dressed professionals can zip around narrow streets that aren’t always great for finding a place to (safely) lock up a bike.

There’s actually a pretty wide variety of wheeled e-rides in play for locals with the guts to get on them. Some with seats and/or handles, others with almost nothing. (The hands-in-pockets hipsters on self-balancing unicycles are quite the sight.)

In both of these Spanish cities it’s clear people are falling for — and, well, sometimes off — the micro-mobility trend.

But the difference between the on-demand scooters being toyed with in Madrid vs Barcelona’s locally owned two wheelers is a level of purpose and intent.

The Lime rides in Madrid’s center seemed mostly a tourist novelty. At least for now, having only had a couple of months to bed in.

Whereas the organic growth of scooters in Barcelona barrios is about people who live there feeling a need.

Even the unicycling hipsters seem to be actually on their way somewhere.

What does this mean for scooter startups? It’s another example of how technology’s utility and wider societal impacts can vary when you parachute a new thing into a market and hope people jump on board vs growth being organic and more gradual because it’s led by real-world demand.

And it’s essential to think about impacts where scooters and micro-mobility is concerned because all this stuff must piggyback on shared public spaces. No one has the luxury of being able to avoid what’s buzzing up and down their street.

That’s why lots of on-demand scooters have ended up trashed and vandalized — as residents make their feelings known (having not been asked about the alien invaders in the first place).

In Europe there’s a further twist because the spaces scooter startups are seeking to colonize are already well served with all sorts of public transport options. So there’s a clear and present danger that these new kids on the block won’t displace anything. And will just mean more traffic and extra congestion — as happened with ride-hailing.

In Madrid, the first tranche of on-demand scooters seems to be generating pretty superficial and additive use. Offering a novel alternative to walking between sights or bars on a trip to-do list. Just possibly they’re replacing a short taxi or metro hop.

In the park, they were being used 100% for fun. Perhaps takings are down at the boating lake.

Barcelona has plenty of electro-powered joyriding down at the beach front in summer — where shops rent all sorts of wheels to tourists by the hour. But away from the beach locals don’t seem to be wasting scooter charge riding in circles.

They’re stepping out for regular trips like commuting to and from work. In other words, scooters are useful.

Given all this activity and engagement micro-mobility does seem to offer genuine transformative potential in dense urban environments. At least where the climate doesn’t punish for most of the year.

This is why investors are so hot on scooters. But the additive nature of micro-mobility underlines a pressing need for the technology to be properly steered if cities, residents and societies are to get the best benefits.

Scooters could certainly replace some moped trips. Even some local car journeys. So they could play an important role in reducing pollution and noise by taking trips away from petrol- and diesel-powered vehicles.

Because they offer a convenient, low-barrier-to-entry alternative with populist pull.

Not being too high speed also means, in and of themselves, they’re fairly safe.

If you’re just barrio hopping or can map most of your social life across a few city blocks there’s no doubting their convenience. Novelty is not the only lure.

Though, equally, the local-level journeys that scooters are best suited for could just as easily be completed on foot, by bike or via public transit options like a metro.

And Barcelona’s congested streets don’t look any less packed with petrol engines — yet.

Which means scooters are both an opportunity and a risk.

If policymakers get the regulations right, a smart city could leverage their fun factor to nudge commuters away from more powerful but less environmentally friendly vehicles — with, potentially, some very major gains up for grabs.

Subsidized scooters coupled with a framework of congestion zones that levy fees on petrol/diesel engines is one simple example.

A clever policy could open the possibility of excluding cars almost entirely from city centers — so that streets could be reclaimed for new leisure and retail opportunities that don’t demand masses of parking space on tap.

Pollution is a chronic problem in almost all large cities in the world. So reshaping city centers to be more people-centric and less toxic to human health by displacing cars would be an incredible win for micro-mobility.

Even as the hop on, hop off ease of scooters offers a suggestive glimpse of what’s possible if we dare to rethink urban architecture to put people rather than four-wheeled vehicles first.

Yet get the policy wrong and scooters could end up — at very best — a frivolous irrelevance. A joyride that disrupts going nowhere. Yet another nuisance on already choked streets. An optional extra that feels disposable and gets rudely discarded because no one feels invested.

In this scenario the technology is not socially transformative. It’s more likely an antisocial nuisance. And a pointless drain on resources because it’s doing no more than disrupting walking.

Scooter startups have already run into some of these issues. And that’s not surprising given how fast they’ve been trying to grow. Their early expansionist playbook does also risk looking like Uber all over again.

Yet Uber could have pioneered micro-mobility itself. But being ‘laser focused on growth’ seemingly gave the company tunnel vision. Only now, under a new CEO, it’s all change. Now Uber wants to be a one-stop platform for all sorts of transport options.

But how many years did it waste missing the disruptive potential of micro-mobility coming down the road because it was too busy trying to fit more cars into cities — and ignoring how residents felt about that?

An obsession with growth at all costs may well be a side effect of major VC dollars flooding in. But for startups it really does pay to stay self-aware, perhaps especially when you’re rolling in money. Else you might find your investors funding your biggest blind spot — if you end up missing the next even more transformative disruption.

The really clever trick to pull off is not ‘scale fast or die trying’; it’s smart growth that’s predicated upon applying innovative technologies in ways that bring whole communities along with them. That’s true transformation.

For scooters that means not just dumping them on cities without any thought beyond creaming a profit off of anything that moves. But getting residents and communities engaged with the direction of travel. Partnering with people and policymakers on the right incentives to steer innovation onto its best track.

Move people around cities, yes, and shift them out of their cars.

There’s little doubt that Uber’s old ‘growth at any cost’ playbook was hugely wasteful and damaging (not least to the company’s own reputation). And now it’s having to retrofit a more inclusive approach at the same time as unpicking an ‘environmentally insensitive’ legacy that original playbook really doesn’t look so smart.

Scooter startups are still young and have made some of their own mistakes trying to chase early scale. But there are reasons to be cheerful about this new crop of mobility startups too.

Signs they see value and opportunities in being pro-actively engaged with the environments they’re operating in. Having also learnt some hard early lessons about the need to be very sensitive to shared spaces.

Bird announced a program this summer offering discounted rides to people on low incomes, for example. Lime has a similar program.

These are small but interesting steps. Here’s hoping we’re going to see a lot more.