For three years, the MacBook Air was conspicuously absent. The ultraportable never left Apple’s site, of course, but we finished keynote after keynote wondering why Apple continued to neglect one of its most popular products, all while overhauling the rest of the MacBook line.

At an event last month in Brooklyn, however, Apple finally acquiesced, delivering the largest single update since the product was introduced ten and a half years prior. In an event stuffed to the gills with an enthusiastic audience, the Air got what was easily the biggest applause break — more than the iPad Pro and certainly more than the Mac Mini.

The fan base was clearly ready for a new Air.

Getting the Air right is a tricky proposition. Not only is it the slimmest model in the line, it’s also the cheapest, a combination that’s made it a popular selection for frequent travelers and those just looking for the least expensive route into the MacOS ecosystem. Every hardware addition to the line comes with a potential price increase — something we saw play out with the evolution of the Mini, which jumped from $499 to $799, removing some of the device’s entry-level appeal. 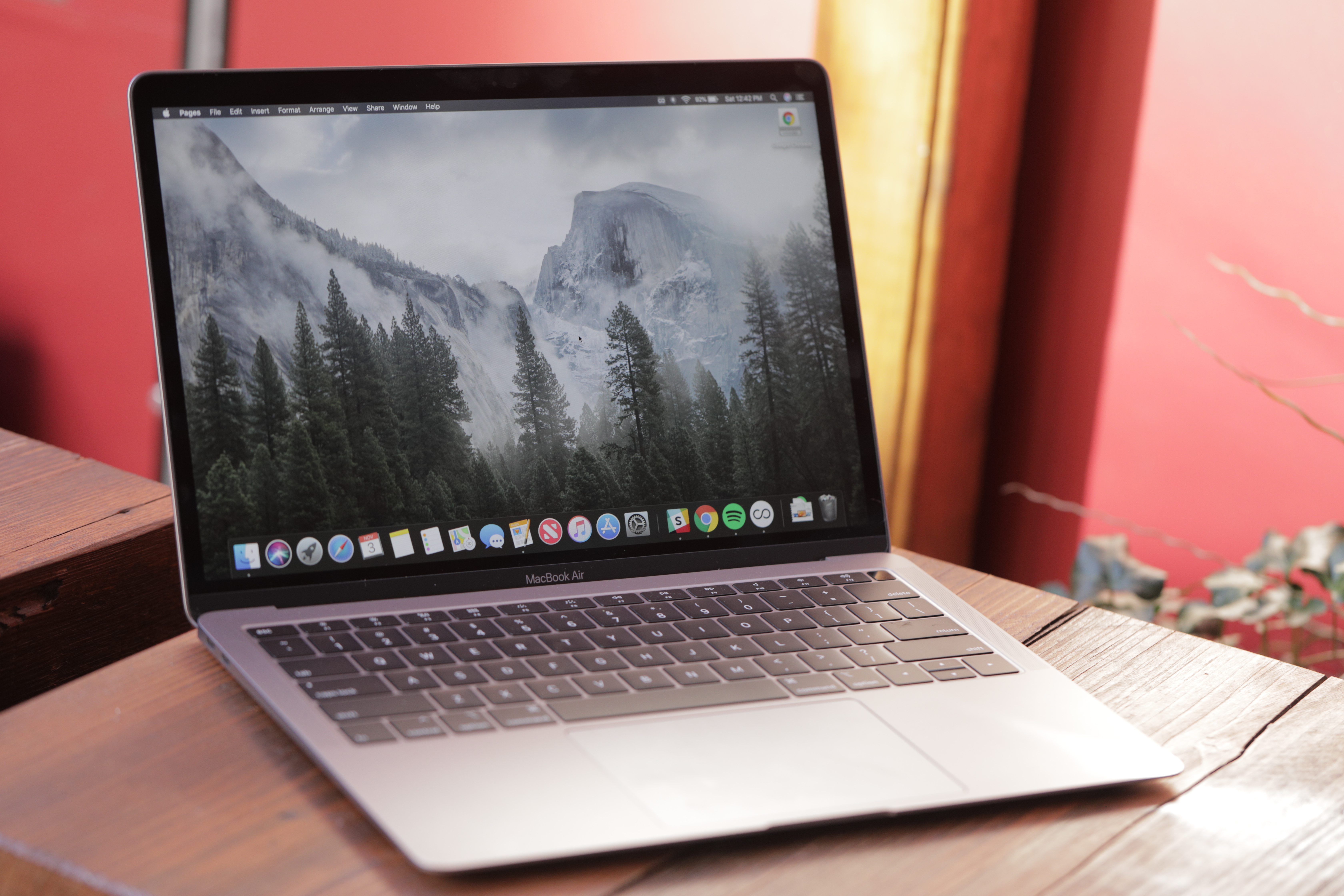 The Air has also seen a price increase, though Apple was able to rein things in a bit more here, in terms of both overall and relative price. At $1,199, the low-end version of the laptop remains the least pricey entry point into the Mac ecosystem (excluding the older Air, which is still available for $999).

This latest update finds the Air finally assuming its place in the current MacBook line, whose current iteration began life with a major overhaul in 2015. Becoming part of the club means an aesthetic upgrade, a move to USB-C, souped up internals and, of course, the long-awaited addition of a Retina Display.

The device arrives amid a shift for the company, as it once again embraces creative professionals with both MacOS devices and iOS through the addition of the iPad Pro. The latter continues to blur the line between Apple’s operating systems, with computation power rivaling — and in some cases outperforming — some of its MacOS models.

Currently, the Air sits between the iPad Pro and low-end MacBook — though given the $100 price difference between it and the former, I don’t know that anyone would be entirely shocked to see Apple quietly sunset the baseline product in favor of the reborn Air. There simply aren’t enough compelling reasons to keep that model around in its current configuration, especially given the Air’s enduring popularity. 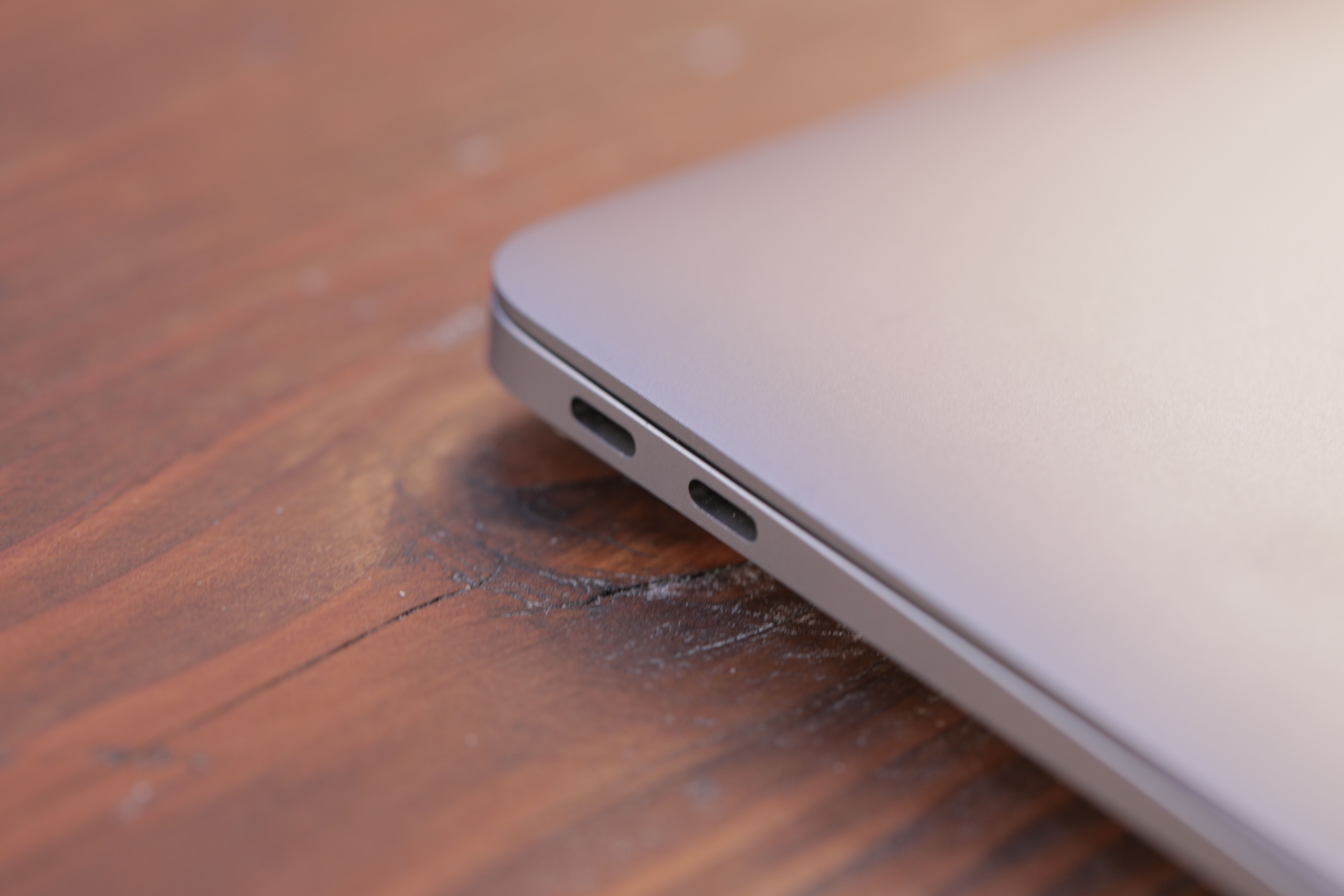 Certain sacrifices were made in favor of keeping the Air’s price down — most notably the Touch Bar. There was some speculation that Apple’s decision to drop the technology on this device was some clear sign that the company was moving away from the touchscreen-adjacent tech, but the reason is likely far more simple: Adding it would have further driven up the entry-level price — and eclipsed the MacBook in the process.

Instead, the company did something even better, breaking out Touch ID from the bar. After a couple of years with a Touch Bar on both my work and personal machines, the fingerprint scanner remains the one feature (outside of the standard function keys like volume) that I use on a daily basis. In the long run, the company may have done the Touch Bar a bit of a disservice by consciously uncoupling Touch ID, but for the Air, it was the ideal decision, bringing its most useful feature without driving up the price in the process.

The keyboard is the same found on the most recent MacBook Pros, as well. That, along with other shifts, is bound to be polarizing among longtime Air users. I will say this, however, if you haven’t tried a MacBook keyboard since the infamous butterfly switch overhaul of 2015, visit your local Apple store to give them another shot. It’s true that they’re still a fair bit shallower than the previous model, but things have been improved in the past three years, courtesy of two major updates. 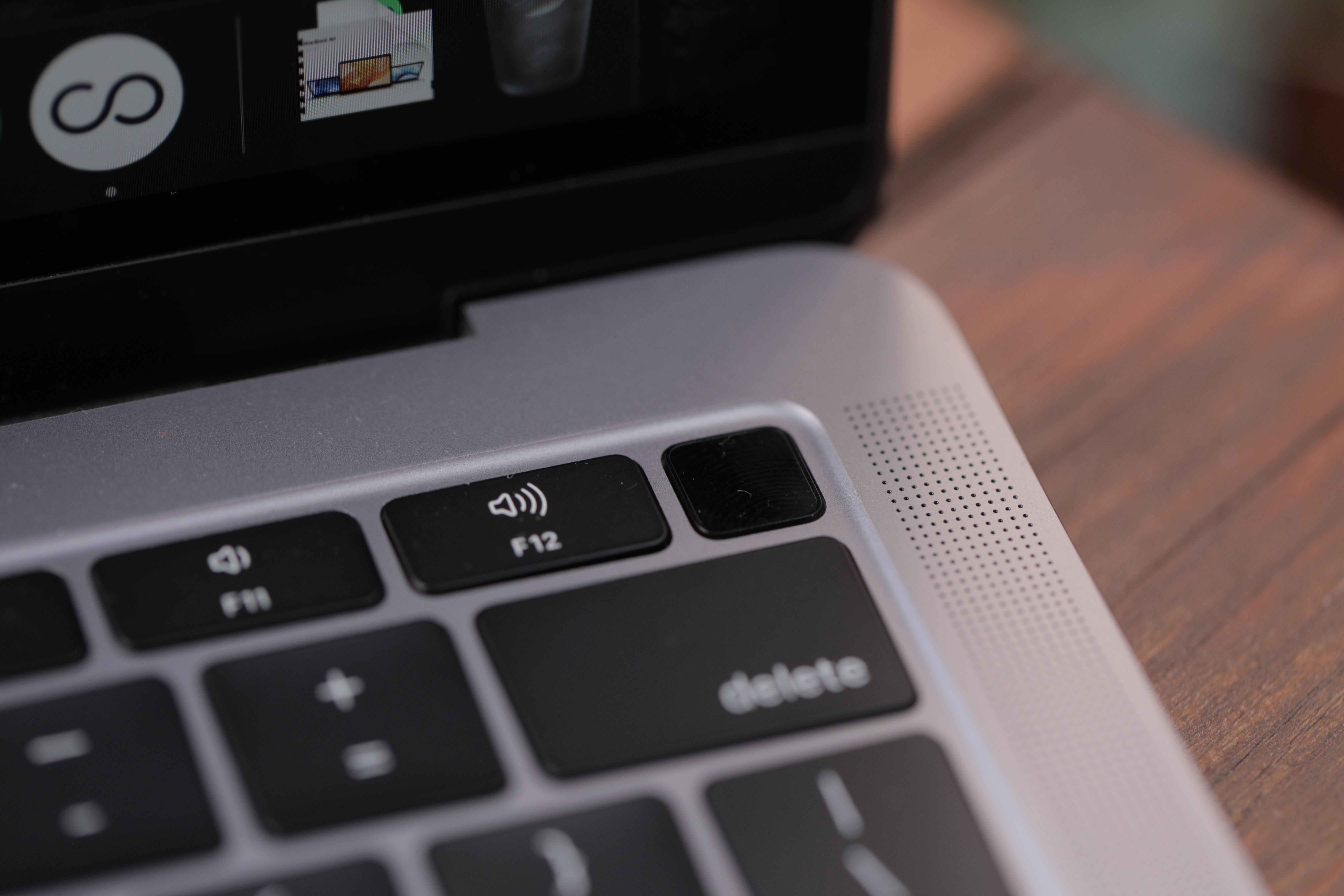 This latest generation is quieter, has a better feel and has the added benefit of a new rubberized bladder, which should protect from spills, along with particulate matter, which has become a bane of everyone with an earlier model’s existence. Seriously, I once found myself roaming around Seattle desperately trying to find a can of compressed air before an Amazon event.

Those who’ve been holding out to upgrade from an earlier Air model will likely have a bit of an adjustment period, but it’s a much easier transition that it was on those initial 2015 MacBooks. The track pad, too, is now in line with its MacBook brethren. It’s 20 percent larger than the previous Air and utilizes Force Touch for a more uniform response across the surface, welcome changes the both of them.

The new Air’s internals are, naturally, an upgrade across the board over the 2015 model, but it’s more of a mixed bag when compared to the MacBook. In fact, the concurrent existence of the two products is likely to cause confusion among buyers — and understandably so. If you’ve been having trouble deciding between MacBooks, Apple’s made that task even more complex.

RAM is the same on both systems at either 8 or 16GB. No surprise there — that’s pretty consistent across the entire MacBook line. The base-level storage configuration, on the other hand, starts lower but goes higher than the MacBook, with an entry of 128GB (to the MacBook’s 256), all the way up to 1.5TB. Of course, storage upgrades are always costly, and if you max this one out, it’s going to run you another $1,000. 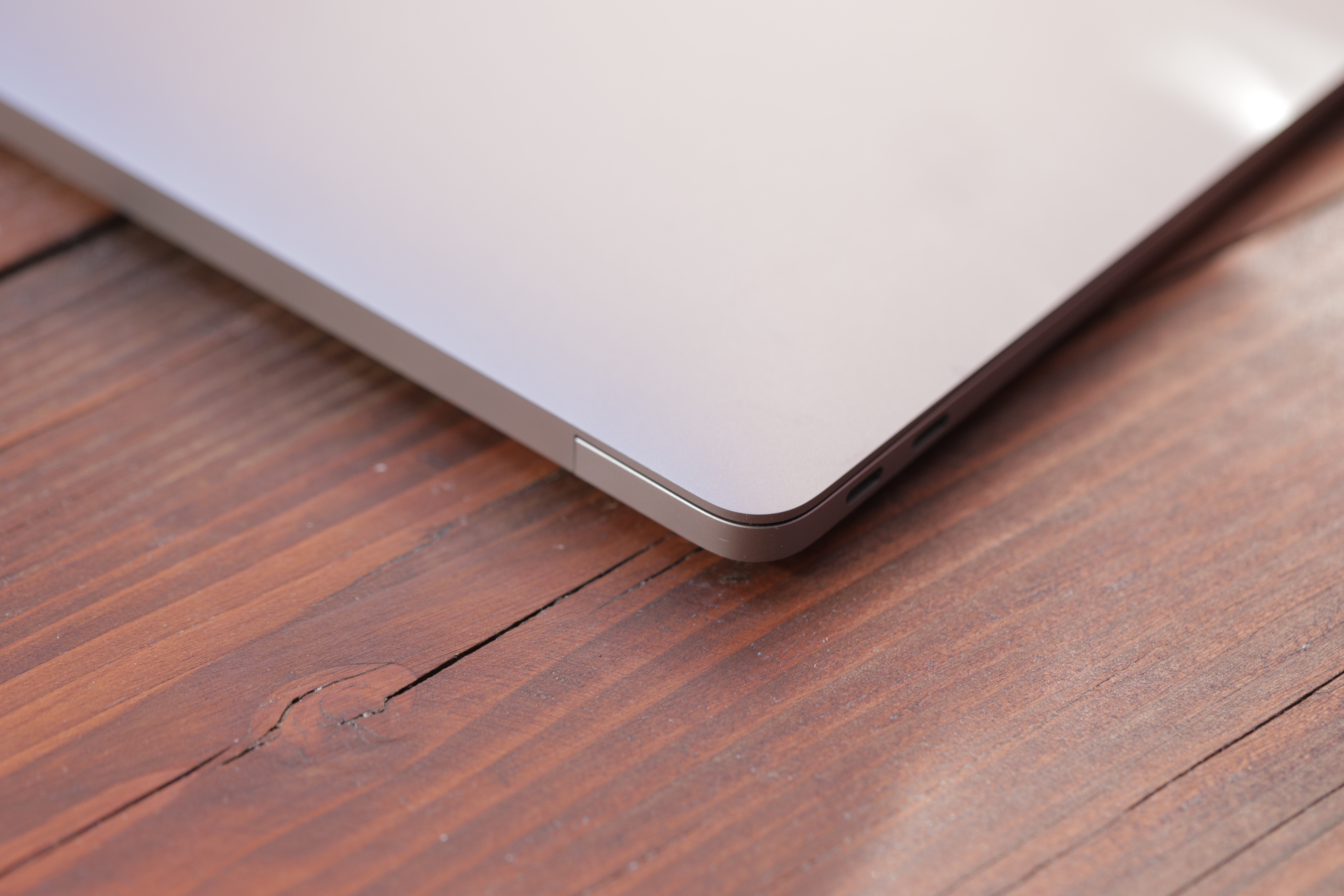 Given that it’s a newer model, the processor is an upgrade over the pricier MacBook on the baseline, from a 1.2GHz dual-core Intel Core i3 to a 1.6GHz dual-core Intel Core i5 processor. That said, there’s only one configuration here, at present, so if you want more power, seriously consider upgrading to the Pro. Our model, the Core i5 coupled with 8GB (standard on everything but storage) scored a 4,297 and 7,723 on Geekbench’s single and multi-core tests, respectively. 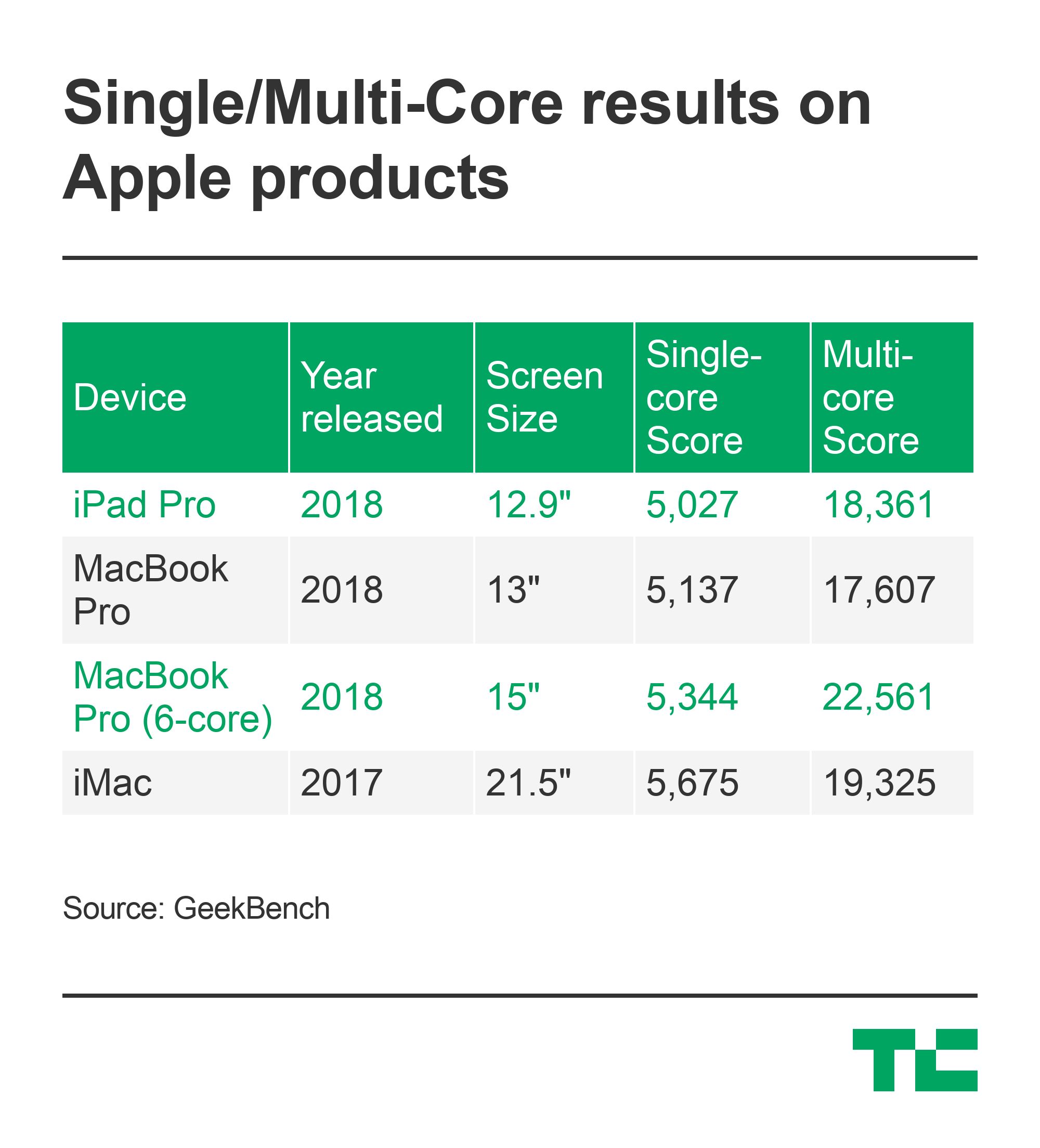 A quick glance at the above graphic really highlights the gulf between the Air and Pro, though the new chips do mark an upgrade over the 2017 MacBook’s single- and multi-core scores of 3,527 and 6,654. The new silicon is plenty zippy for most users’ daily tasks, but if you need more out of your system — be it for gaming or resource-intensive tasks like video edit — it’s worth the jump to the Pro.

Battery, meanwhile, is a pretty sizable bump over the MacBook, owing to the larger footprint on the Air’s 13.3-inch frame (versus the 12-inch MacBook), with a stated “up to 12 hours” on a charge to the MacBook’s 10. I found that to be pretty on the money, in my own testing. I was able to stream video for just a hair under 12 hours — plenty enough to get you through most flights. 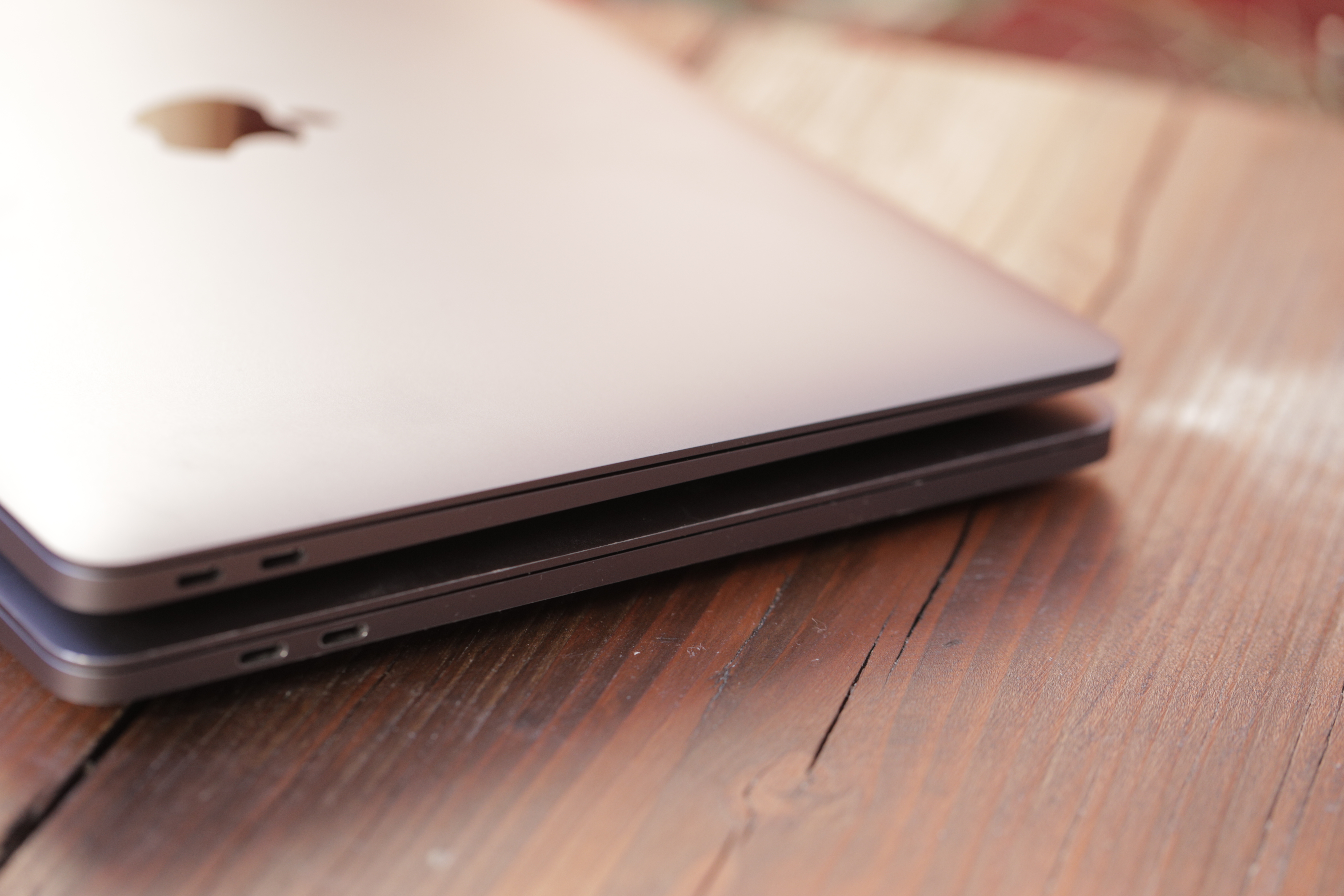 Of course, the larger screen and battery also mean a heftier laptop. The Air’s 2.75 pounds is around 3/4 of a pound more than the MacBook. In spite of retaining the iconic beveled design, it’s also a bit thicker than the 12-inch model. That said, the company’s managed to both shrink the footprint and reduce the weight from the older Air, which weighed in at 2.96 pounds.

The display is, as advertised, a massive upgrade over the last model. If you’ve spent any time with a Retina display, you know the deal. It’s big and bright, with a nice color balance. In terms of sheer numbers, we’re talking about a bump from 1440 x 900 to 2560 x 1600 pixels. That amounts to 227 PPI, compared to the old model’s 128. It’s an immediately apparent upgrade — there’s a reason so many Air owners have been holding out for the addition. The multimedia experience is rounded out by upgraded speakers that are capable of getting LOUD, in spite of taking up very little real estate on either side of the keyboard.

The design language was overdue for an update, and now the system looks nearly identical to the 13-inch Pro at first glance, aside from the familiar tapered design. And, of course, you can pick it up in Gold, keeping with Apple’s theme of more colorful options on lower-cost devices like the iPhone XR. 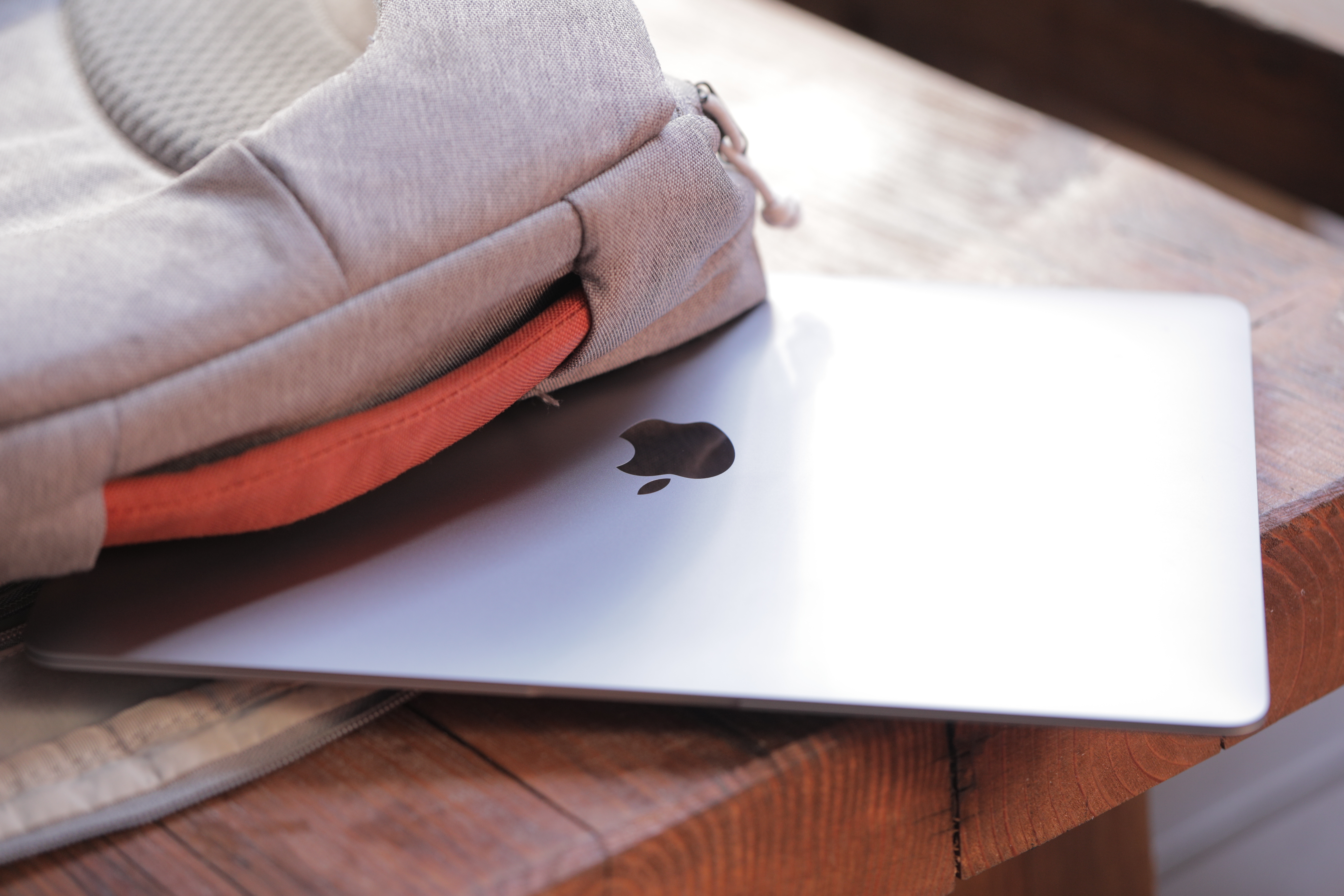 The most polarizing aspect on the frame is no doubt the continued shift to all Thunderbolt 3 (USB-C). No surprise there, of course. Get ready to lead the #donglelife until time comes to upgrade all of your accessories. The two USB-C ports are located on the same side, which means a bit more maneuvering when charging — though the new ports are much more diverse than the old power model. It’s the same set up you’ll find on the MacBook. Upgrade to the Pro, meanwhile, and you’ll get twice the number.

There’s no doubt the new Air marks a sizable update. It’s pricier, too, though Apple’s kept things more in check here than with the Mac Mini. With all of its upgrades and lower price point to boot, the Air is the clear pick over the 12-inch MacBook in practically every way.

As a matter of fact, barring some major future upgrade, the 12-inch likely isn’t long for this world. And that’s perfectly fine. The new Air is very clearly the better buy.