Tink Labs, a Hong Kong startup that develops smartphones that hotels provide to their guests for free, is raising a new round of up to $300 million to further its international footprint, TechCrunch has come to understand.

The startup is in the final stages of completing the deal that could give its six-year-old business a post-money valuation of at least $1.5 billion, two sources with knowledge of discussions told TechCrunch.

It isn’t clear at this point which investors are part of the round, but once source said Tink Labs has made an effort to court hotels and travel firms as investors since it believes they could provide strategic value beyond simply capital. But any hoteliers would likely provide smaller checks, with more established investors picking up the bulk of the round.

Tink Labs declined to respond when contacted for comment by TechCrunch.

The company’s existing investors include manufacturing giant Foxconn (via its FIH Mobile unit), Sinovation Ventures — the investment firm from ex-Google China head Kaifu Lee — and Cai Wensheng, an angel investor who is the founder and chairman of Hong Kong-listed photo app firm Meitu. It also snagged money from SoftBank this summer after the Japanese firm invested in a joint-venture for the Japanese market. That deal appears to have been hugely successful since Japan is Tink Labs’ largest market with over 810 hotel deployments.

To date, the firm has announced over $170 million in funding. Its most recent deal was a $125 million investment in 2016, but a source close to the company said it landed an undisclosed deal in the past year that took its valuation over the $1 billion mark and made it one of Hong Kong’s first unicorns. Bloomberg reported last year that it had closed $40 million, but that was never confirmed nor announced by Tink Labs, so this round could mark its official coming out as a billion-dollar business.

The company has 17 offices worldwide while its website claims it has deployed phones in over 1,700 hotel locations worldwide, predominantly in APAC and Europe, with over 12 million customers using them. It said in March that it plans to reach one million hotel rooms by the end of this year — half of which will be in Europe — and this new money is likely earmarked for further global growth. To give an indication, there are currently over 90 open positions listed on Tink Labs’ careers page.

The company was founded by CEO Terrence Kwok, now 26, and it moved into the hotel concierge phone space after first developing a device rental service that targeted travelers at airports.

Tink Labs remained focused on offering connectivity to travelers, but it shifted the focus to hotels because it believes it can help foster a closer relationship between hotel brands and their guests. Tink Labs says that active users typically engage with the device for just over one hour per day, while it claims to have lifted hotel revenue by four percent when adopted. 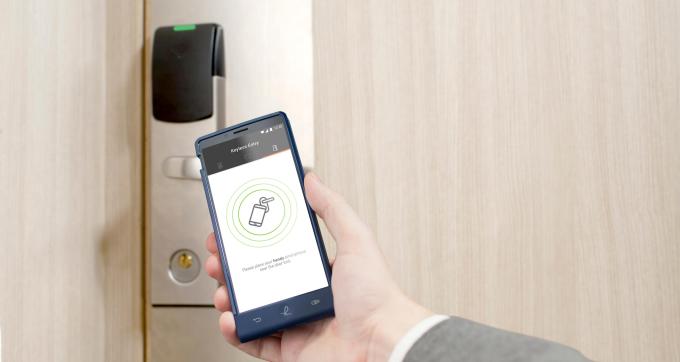 Tink Labs’ Handy phone can also be programmed to work with key-less doors and to activate air conditioning and other gadgets in guest rooms.

Its Handy product is a smartphone for hotel guests that takes the pain out of mobile roaming. You can make calls and send messages like a normal phone, but it also includes details of services available at your hotel and nearby activities. It even hooks into the hotel’s telephone system so you can order room service before you get back to your room, call a colleague via their room number, or phone the helpdesk if you’re out and about but need help talking to a taxi driver in the local language.

The concept has proven popular with hotels — global brands using Handy include the likes of IHG, Sheraton, Novotel, Mercure and Holiday Inn — and, in perhaps the ultimate validation, a series of knock-offs have surfaced with their own Handy clones.

Sign of success for Hong Kong's Tink Labs — someone cloned its Handy phone with a Freedy phone pic.twitter.com/5GVJcKlg9f

Tink Labs has pushed itself (and Handy) as a platform for enabling sales, both for hotels and ‘preferred’ venues in cities, with pricing starting at $1 for each device in a room per day.

While this new funding round is in its final stages before being closed, there is one intriguing wrinkle. Tink Labs seems to have flirted with the idea of an ICO, even though most token sales have shifted to essential private, rather than public, sales.

The company is seeking to hire a “strategy associate (with ICO experience)”, according to a listing on its jobs site that has been online for most of this year. Despite multiple requests for information from TechCrunch, Tink Labs has not provided further details on its plan for crypto. However, with this new round soon to be in the bank and the general crypto market declining significantly this year, an ICO would seem unlikely.