Edo, an ad analytics startup founded by Daniel Nadler and actor Edward Norton, announced today that it has raised $12 million in Series A funding.

Nadler and Norton have both had startup success before — Nadler co-founded and led Kensho, which S&P Global acquired for $550 million. Norton invested in Kensho and co-founded CrowdRise, which was acquired by GoFundMe.

Even so, ad analytics might seem like an arcane industry for an actor/filmmaker to want to tackle. However, Norton said he was actually the one to convince Nadler that it was worth starting the company, and he argued that this is an important topic to both of them as creators. (Nadler’s a poet.)

“Movie studios and publishers, they take risks on talent, on creative people like us,” Norton said. “We want them to do well … The better they do with the dollars they spend, the less risk averse they become.”

Nadler and Norton recruited Kevin Krim, the former head of digital at CNBC, to serve as Edo’s CEO.

Krim explained that while linear TV advertising still accounts for the majority of ad budgets, the effectiveness of those ads is still measured using old-fashioned “survey-based methodologies.” There are other measurement companies looking online; Norton said they’re focused on social media sentiment and other “weak proxies” for consumer behavior. 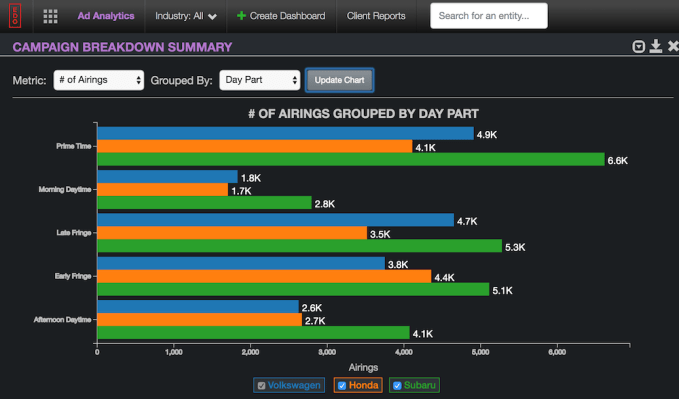 In fact, Edo says that since its founding in 2015, it has created a database of 47 million ad airings, so advertisers can see not just their own ad performance, but also that of their competitors. This allows advertisers to adjust their campaigns based on consumer engagement — Krim said that in some cases, advertisers will receive the overnight data and then adjust their ad rotation for that very night.

As for the Series A, it was led by Breyer Capital. (Jim Breyer has backed everything from Facebook to Etsy to Marvel.) Vista Equity co-founders Robert Smith and Brian Sheth participated in the round, as did WGI Group.

“For more than a decade I’ve watched the data science talent arbitrage transform industries from finance to defense, from transportation to commerce,” Breyer said in the funding announcement. “We needed someone to bring these capabilities to bear on the systemic inefficiencies and methodological shortcomings of measurement and analytics in media and advertising.”

On the customer side, Edo is already working with ESPN, Turner, NBCUniversal and Warner Bros. I wondered whether some of the TV networks might have been worried about what Edo would reveal about their ads, but Norton said the opposite was true.

“I don’t sense that they in any way have trepidation that we’re going to pull their pants down — quite the opposite,” he said. “They are absolutely thrilled with our ability to help burnish and validate their assertions about the strength of what they’re offering.”