The Red Hydrogen One is real. I’ve held it in my hands. It’s sitting face down on my desk right now as I type these words.

None of this is to say, of course, that it needs to or even should exist. The Hydrogen One is less a phone than an idea that manifested its way into existence through sheer force of will. It’s a testament to the fact that just because a concept is potentially disruptive doesn’t necessarily make it good. Not with a starting price of $1,299 (and $1,599 for the titanium version), at least.

The handset functions best as a conversation piece. It’s big and it’s bold and it’s bizarre, sporting a massive footprint that dwarfs even the Pixel 3 XL, flanked by serrated edges that bring nothing to mind more than John Rambo’s hunting knife. And certainly the size, weight and build of the product should leave little question that the thing could double as a weapon, should you find yourself in a tight spot. 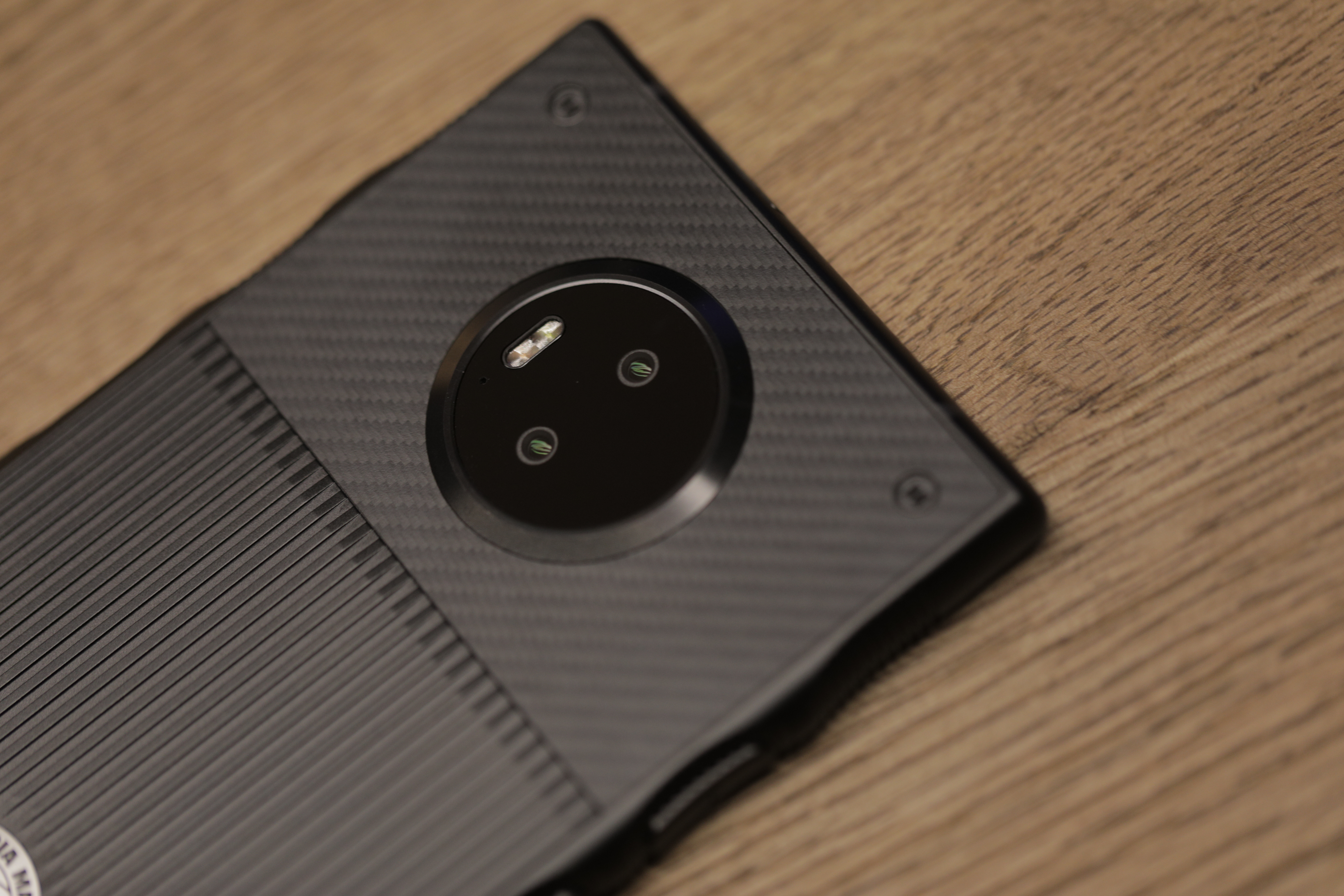 Of course, in this crowded smartphone market, getting noticed is half the battle. And the Hydrogen One has no problem on that front. I got a lot of “what’s that?” when I took the handset for a spin, capturing friends and food in 3D courtesy of the dual stereo rear-facing 12-megapixel cameras.

The next question is usually something in the area of “why?” That one is a bit more difficult to answer. After a few days with the phone, I’m still struggling with a justification for the front-facing Holographic 4-View display that doesn’t lean heavily on novelty. There’s no denying that it’s neat — or at the very least interesting. But I’m struggling to imagine a future in which most or even some of my picture or video viewing is done on this sort of device. 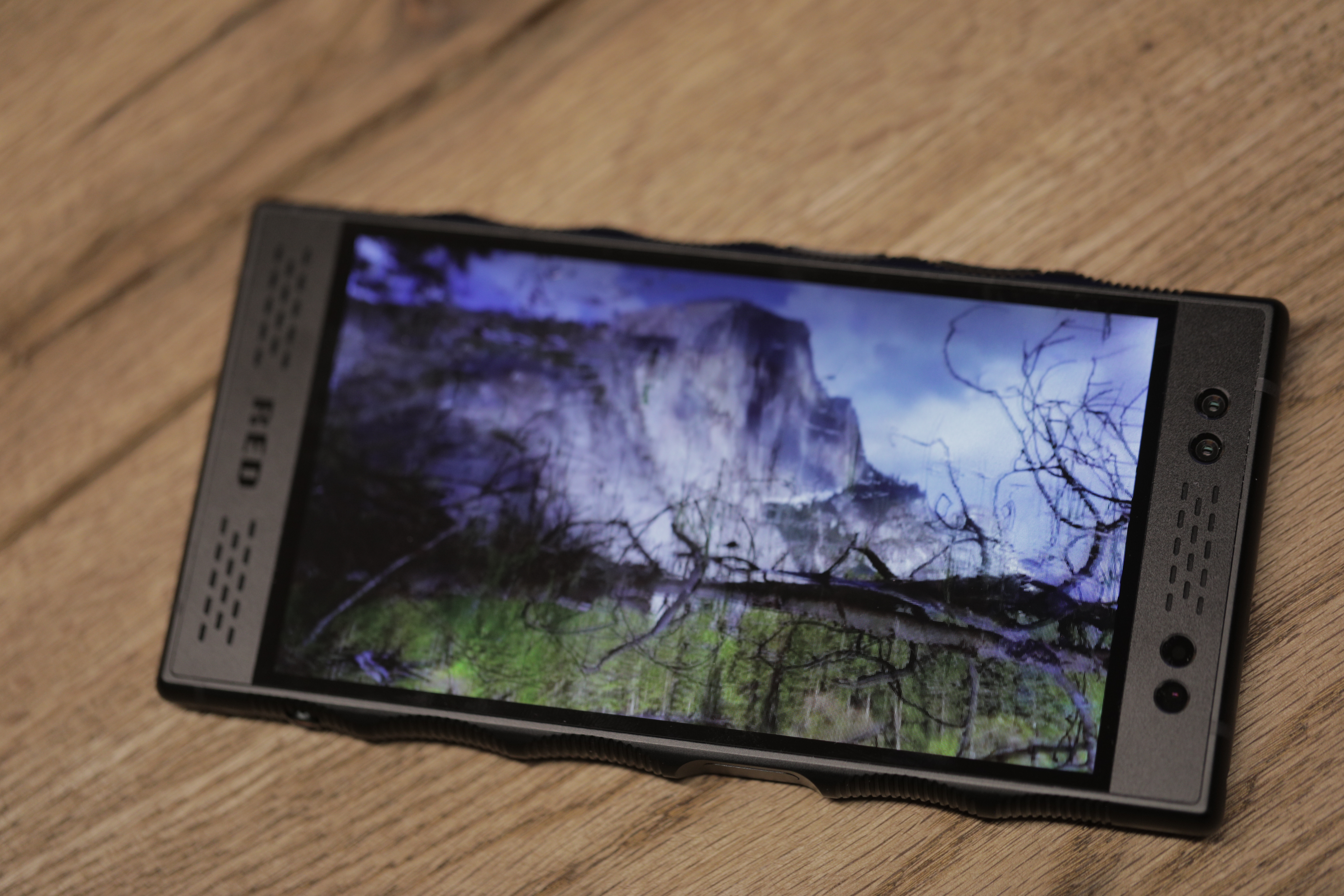 Red has leveraged a new take on the sort of 3D displays we’ve seen on products like Nintendo’s bygone 3DS. Created in partnership with a company called Leia, the technology works thusly:

All of that results in an image that provides a sense of depth to the viewer, without the sort of eyestrain found in similar tech. On the face of it, however, it looks pretty similar to those old holographic baseball cards they made back in the day. It also means that, in spite of the 515ppi 5.7-inch display, images can sometimes feel fuzzy. Another interesting side effect is a fair amount of light bleed from the top and bottom of the screen while in four-view mode. 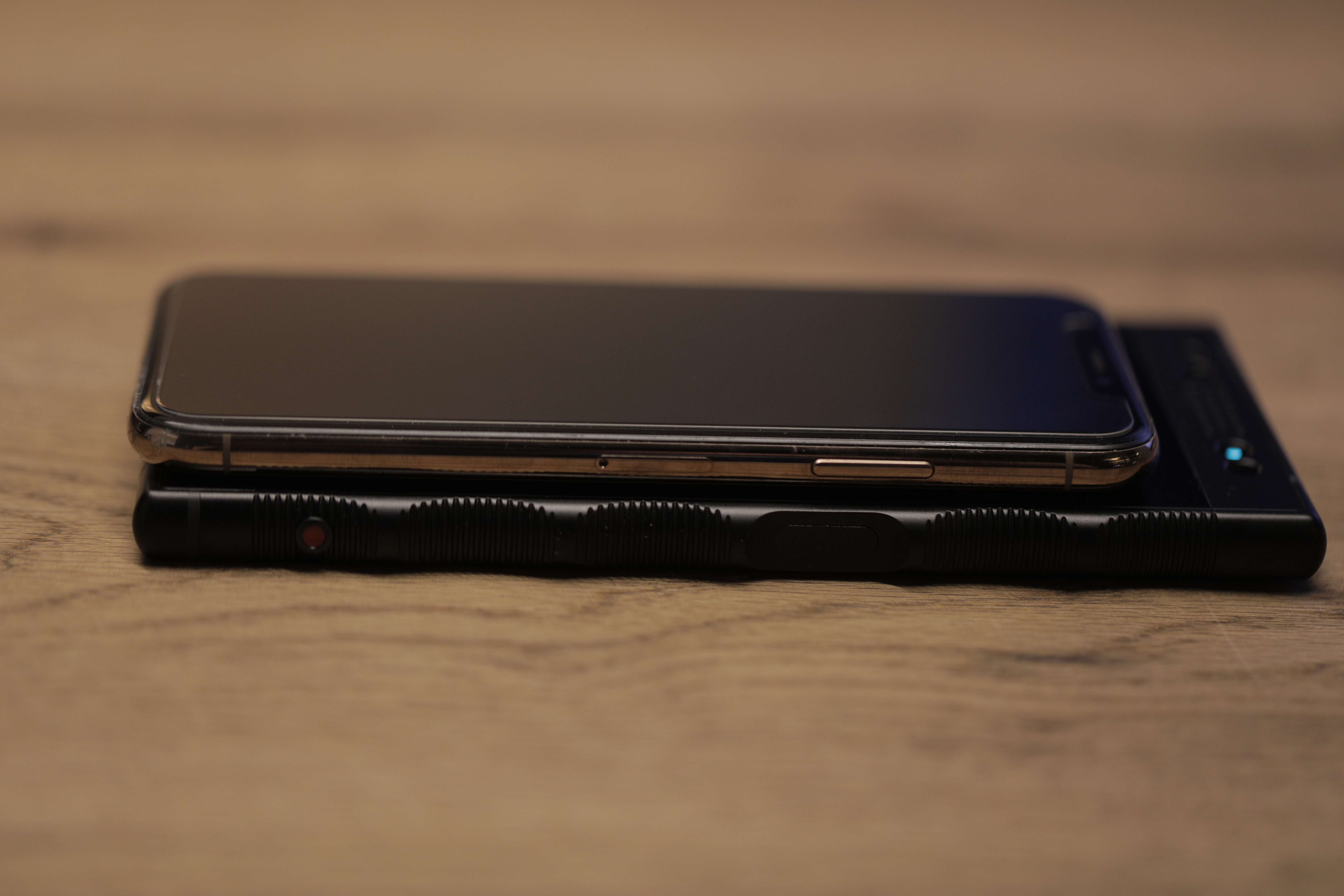 Content will certainly be an issue going forward. That’s always an issue with these sorts of formats. Right now, the phone offers a slew of short nature photos, along with free access to a pair of movies (“Fantastic Beasts and Where to Find Them” and “Ready Player One”) available as an exclusive to AT&T subscribers.

Then there’s the content you capture yourself. I will say I was surprised at some of what the rear-facing cameras could do. Turns out they handled low light fairly well. That said, my amateur photography skills ended up with my capturing some pretty wonky shots with uneven depths. But even if I were a better photographer, I can’t really imagine looking at my own images in 3D is a compelling enough use case to make the considerable investment required.

I realize I’ve been pretty harsh on this $1,300 phone. And there are, indeed, things to like here. The build quality is at the top of the list. It’s certainly not to everyone’s taste — the Hydrogen One is big and garish and won’t fit in the pockets of your yoga pants. But it’s definitely solid. Red’s always had that going for it. The thing is built like a goddamn tank. 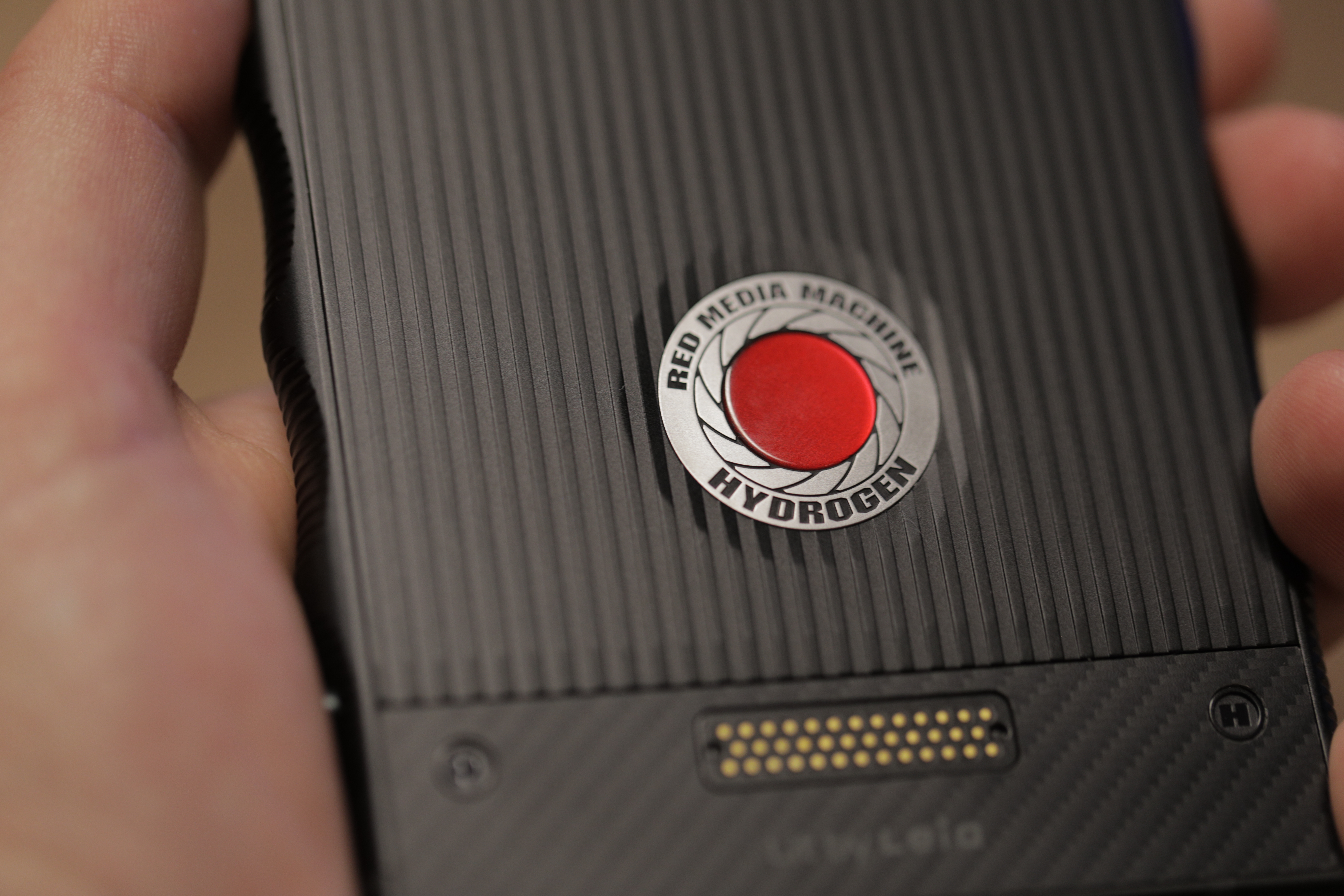 And while, again, I can’t imagine the technology having a lot of stickiness (we can meet back here in five years and you can make fun of me when every phone has some version of the tech), it’s utterly fascinating. It’s probably even more so when, let’s be honest, you’ve got a little bit of that sticky icky in your system. Also, shout out to the company for not cutting other corners here, including battery — 4,500 mAh is downright absurd.

Another little-discussed feature (because we’ve gotten plenty of other things to focus on) is its modularity. Like an SLR, the rear camera can be swapped out. Of course, those modules aren’t coming until next year, so it’s not exactly a selling point at launch. When it does arrive, it will include things like an extended battery. It does look like the company’s painted itself into a bit of a corner with regards to module size, similar to what Motorola did with its Z line. 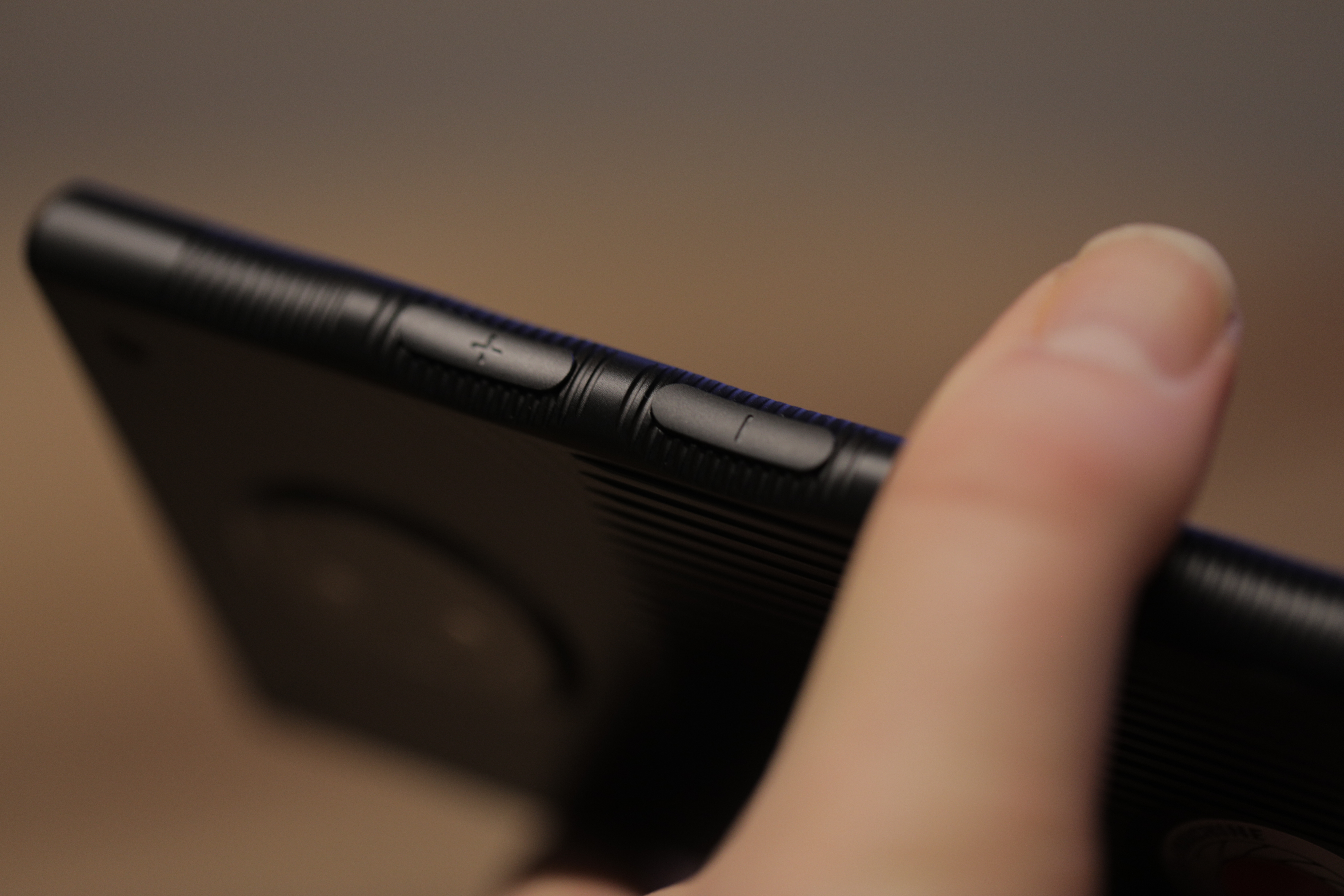 The Hydrogen One is available November 2. It’s easily one of the most ambitious, bold and fascinating smartphones I’ve ever seen. If the device does, indeed, flop, it will have done so with the sort of audacity rarely seen in a space full of me-too devices. If you’re going to fail, fail big. At least that way you won’t be forgotten.