Tier, one of a number of electric scooter rental startups based in Berlin, has raised a chunky €25 million in Series A funding. Leading the round is VC fund Northzone, with participation from existing investors Speedinvest, and Point Nine.

The investment marks the biggest financial backing for a European company in the space, and, according to my sources, signals the beginning of a pending VC war to create the “Bird or Lime of Europe”.

Go Flash (or perhaps just “Flash”), founded by Delivery Hero and Team Europe founder Lukasz Gadowski, is also thought to be out raising a war chest from VCs across Europe. I understand the yet-to-launch startup is already backed by Gadowski’s own cash and €2 million from the mobility arm of Target global.

And just two month’s ago Taxify announced its intention to do e-scooter rentals under the brand Bolt, first launched in Paris but also planning to be pan-European, including Germany. To name just a few.

Meanwhile, Bird and Lime have made tentative launches in Europe. The U.S. e-scooter services are both available in Paris, with other European cities expected soon (Update: Bird is actually active in Paris, Brussels, Tel Aviv, Antwerp, Vienna and Zurich).

Founded by “serial entrepreneurs” Lawrence Leuschner (CEO), Julian Blessin (CPO), and Matthias Laug (CTO), Tier provides electric scooters that can be rented on demand to travel the “last mile” in cities. To use the Tier service, riders download the app, locate one of the available e-scooters using the map, pay a fixed fee of €1 to unlock, followed by a fee of €0.15 per minute to ride.

The startup pitches its mobility offering as an “independent, fun and conscious way of urban commuting,” and says that what sets Tier apart from competitors is the way it plans to work closely with local governments and town halls to help create a sustainable experience. “The goal is to change the current status quo of polluted cities, smog and ineffective, inconvenient and overpriced transportation modes together!” says the company.

Its first active city is Vienna, which launched just last week. However, the plan is to use the new Series A funding to roll out the Tier service to additional European cities, and to further scale the team.

Cue a statement from Paul Murphy, Partner at Northzone: “European cities are uniquely placed to benefit from access to low-carbon, accessible and convenient transport, thanks to their high population density and political commitment to lower carbon emissions. It takes a strong team to navigate a complex landscape. Tier is the frontrunner in Europe, and we have been incredibly impressed with what the team has achieved to date. We think they can become a category winner in a space”.

Fun fact: Tier’s Blessin was instrumental in setting up electric roadside scooter rental company Coup, a subsidiary of Bosch and backed by BCG Digital Ventures that operates in Berlin, Paris and Madrid. He served as the company’s “Venture Build” & Head of Growth.

Although not yet official — Gadowski’s LinkedIn profile simply lists his latest job title as CEO at “TBA MOBILITY SERVICE” — Go Flash is one of Berlin’s worst kept secrets. The new venture was briefly mentioned by local German blog Gruenderzene, whilst I’ve heard a few more details from my own sources in the German city and from a number of VCs across Europe. 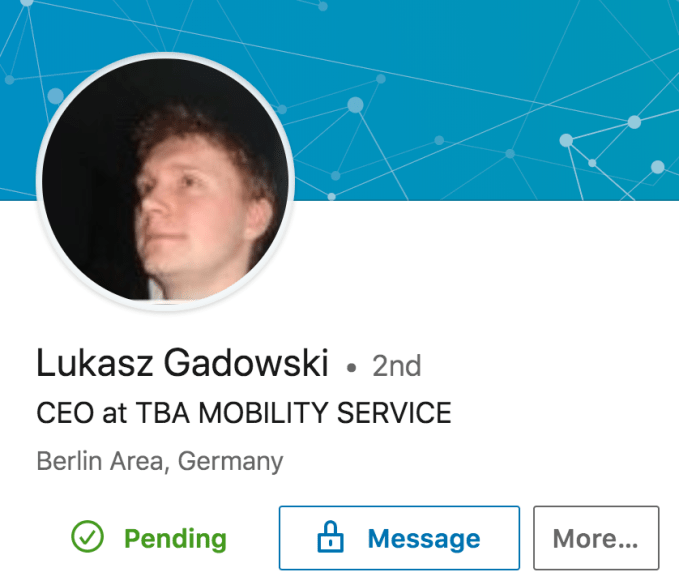 One rumour in circulation is that Gadowski is in the midst of raising a “mega round” from multiple European VCs, with the aim of creating both a war chest to fend off Bird and Lime, but also to launch a pan-European e-scooter service that hits the road motoring via a roll up of other nascent e-scooter startups across the region.

The figure being touted is between $100 million and $200 million, with one source telling me it is still very early days, while another says the deal is practically done. I’ve also heard that Go Flash is already in talks with an e-scooter startup in Sweden (while Delivery Hero garnered much of its growth via acquisition).

As one person familiar with Gadowski’s previous modus operandi put it: “He’s good at fundraising. $100 million wouldn’t be hard for Lukasz to raise. He raised over a $1 billion in equity for Delivery Hero and made a lot of people money”. In other words, we might expect to see some investors previously associated with Delivery Hero take part.

More intriguingly, one source, albeit based on limited information, said that if the mega round is true it will be fascinating to witness a number of top European VCs “colluding” in a bid to keep Silicon Valley at bay. The general sentiment is that the top European VCs don’t want the potentially lucrative e-scooter space, which appears to have very promising unit economics, to be rolled over by a U.S. company in the same way that Uber swept into Europe and overtook much of the local competition.