Epsagon, an Israeli startup, launched today with a new serverless tool that helps customers monitor infrastructure, even when they don’t know where or what that is.

That’s the nature of serverless of course. It involves ephemeral resources. Developers build a series of event triggers and the cloud vendor spins up the necessary resources as needed. The beauty of that approach is programmers just codes without worrying about infrastructure, but the downside is that operations doesn’t have any way of controlling or understanding that infrastructure.

Epsagon is trying to solve that problem by giving visibility into serverless architecture. “What the company does, essentially is distributed tracing, observability and cost monitoring for serverless. We’ve been laying low for awhile, and now is actually the official launch of the company,” CEO and co-founder Nitzan Shapira told TechCrunch.

With serverless you can’t use an agent because you don’t know where to put it. There is no fixed server to attach it to. This makes using traditional logging tools inappropriate. Epsagon gets around this problem with an agentless approach using libraries. Shapira says the company will be open sourcing these libraries to make them more attractive to developers.

For starters, the company is supporting AWS Lambda, but plans to expand to other cloud platforms next year. First you sign up for Epsagon, enter your AWS credentials and it immediately begins providing some information about performance in the Epsagon dashboard. But Shapira says the real value comes from the libraries. “We have this library that is essentially the instrumentation, which acts in the same way an agent does,” he explained. 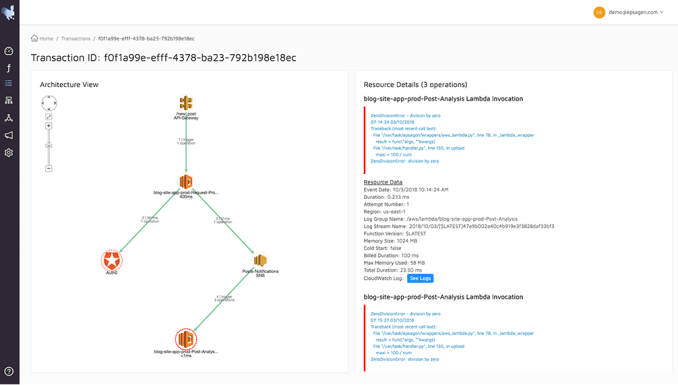 The product does more than simply provide traditional monitoring data though. It also allows customers to understand what they are spending. With serverless, the cloud company provides you resources as required, which is convenient, but could also spiral out of control quickly from a cost perspective. Epsagon lets you see exactly what you’re paying.

The company is still playing with pricing, but they are using a self-service approach for starters. You go and sign up on their website and there are a variety of pricing options starting with a free tier. All of the tiers have a free two-week trial.

Epsagon, which is based in Tel Aviv, currently has 11 employees. They are in the process of opening a US office where they will establish sales, marketing and support operations. They raised $4 million led by Lightspeed Venture Partners and StageOne Ventures in January.