Even for those of us born decades after the event itself, Neil Armstrong’s first steps on the moon remain among history’s most iconic and indelible images. Can a Hollywood movie tell us anything new about that moment?

With “First Man” (which opens today), “La La Land” director Damien Chazelle certainly tries. The film climaxes with an eerie and beautiful dramatization of Apollo 11, and with Armstrong’s famous words about a giant leap for mankind. But it’s what comes before that feels revelatory — the film’s fastidious attention to the training, the mistakes and the disasters that all led up to that moment.

Most of those details come from real life, according to screenwriter Josh Singer (who won an Oscar for co-writing “Spotlight”). His starting point was James R. Hansen’s biography of Armstrong (who’s played in the film by Ryan Gosling), and Singer said he was also able to pepper Hansen, as well as Armstrong’s sons Mark and Rick, with questions.

That doesn’t mean everything in the film sticks to the historical record. In fact, Singer said that one of the things he tried to do in the annotated screenplay was to highlight the areas where the movie diverged from reality. But even then, it seems like the moments when Singer made things up or fudged the facts weren’t all that far from the truth.

“We felt a tremendous responsibility to Neil and his family,” he said. In addition, he noted that “anytime you’re treading in territory that’s been written about a lot, you feel that it’s a little bit of a higher bar.”

For example, while the film shows the Gemini astronauts using a multi-axis trainer to prepare for weightlessness and space flight, it’s not totally clear whether the trainer (which is basically a giant whirling machine) was actually used in that program. On the other hand, they definitely train using the “vomit comet” plane, so why not show that? Ultimately, Singer said they decided to go with the trainer because it “just felt better storywise,” foreshadowing a later scene in the film.

Similarly, he said that while the crash of the lunar landing research vehicle shown in the movie was real, Armstrong’s actual injuries consisted of “a bloody tongue and trouble talking.” However, to convey that “he really did almost die,” Singer and Chazelle decided to show external injuries, rather than “making Ryan talk funny.”

In Singer’s view, it was the research that allowed him to write a film that “pushes [against] the historical narrative” around the space program. To be clear, it’s not a wildly revisionist film — I walked out of the theater admiring Armstrong, his colleagues and what they accomplished. But Singer said he wanted to show that “there really was a human cost here.”

“That’s a fairly provocative thing to say,” he argued. “The majority of the portraits of these men show the stiff upper lip. In that way, we’re trying to do what Steven [Spielberg] was trying to do with ‘Saving Private Ryan,’ show the human side. Why was this the greatest generation? Not because they were inherently great, but because they were willing to sacrifice.”

Singer said that the idea of sacrifice has contemporary relevance as governments and private companies plan to return to space exploration. He recalled being a child and hearing Ronald Reagan’s speech after the Challenger disaster, where the president declared, “The future doesn’t belong to the fainthearted; it belongs to the brave.”

“Those lines are just so powerful,” Singer said. “They sum up everything that this effort requires.”

In the same vein, the film shows some of the broader social and political context of the Apollo missions, with protesters criticizing the extraordinary cost of the program when there were so many unsolved problems here on Earth.

“That question was much more prominent than people remember,” Singer said. “We think that at the time, everybody was all gung-ho, but it just wasn’t the case.”

For Singer, though, the answer to “Is it worth it?” is clear. It’s expressed early in the film when Armstrong is asked why he wants to go to space. In response, he recounts going up in an X-15 and looking down at the atmosphere, a view that gives him an entirely new perspective on Earth.

“There’s a certain faith involved: I don’t know what I’m going to see, but I’m going to learn something, that’s why we explore,” Singer said. “I’d like to think that actually, this movie is an argument for why to buck the trends and the criticism and the questions. That it is worth our time, and effort, and money, and sacrifice.” 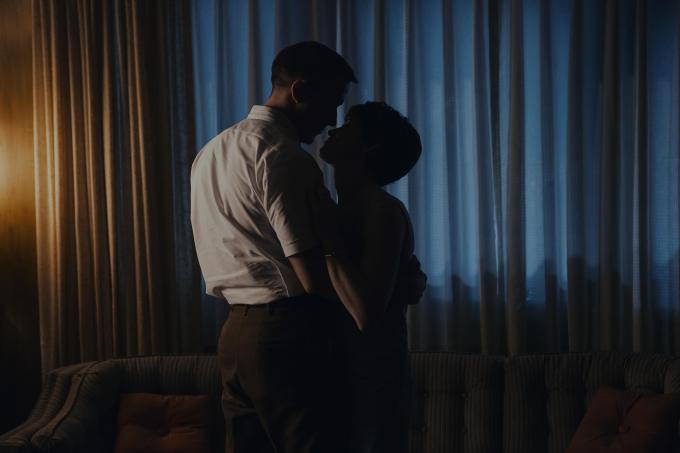 And it sounds like Armstrong’s family is happy with the results. Via email, Rick Armstrong told me that Gosling and Claire Foy (who plays Rick’s mother Janet) “do an excellent job of capturing memories that I have.

“For example I was very glad to see that some of my Dad’s sense of humor comes through in the film, because he really was a pretty funny guy,” Armstrong said. “Claire’s portrayal is just so spot on that I don’t know how it could have been better. She was a very tough and independent woman and I think that comes through brilliantly.”

Rick and his brother Mark didn’t just consult on the film — they also had cameos (Rick told me, “I have a new appreciation for the patience required by everyone involved in movie making, there are long hours and a lot of sitting around!”), and they spoke out after Senator Marco Rubio suggested (absurdly) that the film might not be patriotic enough.

When I asked Rick how he sees the moon landing now, he said he agreed with his father that it was far more than a personal accomplishment.

“I believe it was a national accomplishment of 400,000 people that committed themselves to a goal and who all put in long hours and extra effort to make the impossible become possible, as well as the American taxpayers that footed the bill for it, and the government that authorized it,” Armstrong said.

“It was a global one in the sense that it was done on behalf of ‘all mankind’, as they went to great lengths to present it as a human achievement,” he continued. “Furthermore, our leadership rightly used the moon landing as a platform to improve relations with other countries based on scientific achievement, and of course, used it as a bridge with the Soviet Union to bring the Cold War to an end.”

Update, October 14: This story has been updated to more accurately reflect the role of the “vomet comet” in the Gemini program.