Gogoprint, a startup that is aiming to disrupt the traditional printing industry in Southeast Asia, has pulled in a $7.7 million investment as it prepares to expand its business in Asia Pacific.

We first profiled Gogoprint in 2016 soon after its launch the previous year, and since then the Bangkok-based company has expanded beyond Thailand and into Singapore, Malaysia and Indonesia. Now, the company is looking to go beyond Southeast Asia and enter Australia, New Zealand, South Korea and other markets over the coming 12 months.

Those moves will be funded by this Series A round, which is led by existing Gogoprint backer OPG (Online Printing Group), an investment firm from Kai Hagenbuch who was an early backer of Brazil-based Printi. Printi previously sold a chunk of its business to printing giant VistaPrint through a 2014 investment and it is generally heralded as a startup success within its space.

Gogoprint claims to have worked with 45,000 companies to date. Its core services include printed business cards, flyers, booklets, posters and more, in addition to marketing collateral such as promotional pens, other stationary and flash drives.

Printing isn’t a particularly sexy space from the outside, but Gogoprint is aiming to upend the industry in Southeast Asia using something known as “batching.” That involves bundling a range of customer orders together for each print run to ensure that each sheet that’s sent to the printer is filled to capacity, or near capacity.

That sounds obvious, but traditional printing batches were almost always below capacity because each customer ordered individually with little option for batching. Gogoprint uses the internet to reach a wider number of customers which, using technology to batch jobs, means that it can handle more orders with fewer printer runs. That translates to cost savings for its business and lower prices for its customers. There are also benefits for the printers themselves, as they are guaranteed volume, which is no sure thing in today’s increasingly digital world.

Gogoprint joint managing director David Berghaeuser — who founded the company with fellow co-founder Alexander Suess — told TechCrunch that the company’s main pivot has been away from the idea it needed to own its printing facility in-house.

“When we started, we had this impression that as an online printer eventually we needed to own and operate our own machinery. But over one or two years we had a mindset shift when we realized there’s this option to operate this model as a pure marketplace — we’re definitely a marketplace and do not plan to own any printing machinery,” he explained.

A large part of that is because in Southeast Asia it simply isn’t practical to ship products overseas, both in terms of time and also the cost and hassle of importing. So Gogoprint has local partners in each market that it works with. Rather than “disrupting” the system, Berghaeuser argued that his company is making the process more efficient. 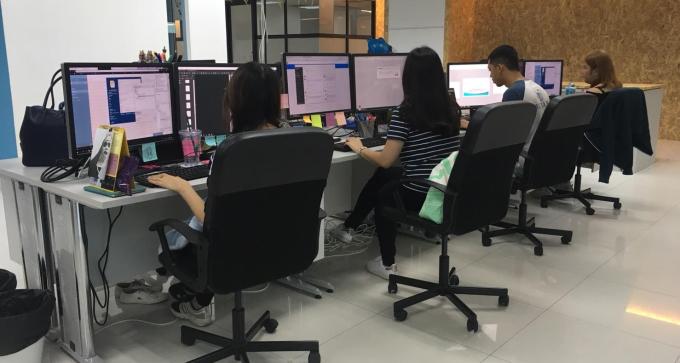 Gogoprint staff at the company’s office in Bangkok, Thailand

Gogoprint currently has around 125 staff, and there are plans to grow that number by an additional 30. In particular, Berghaeuser said the company is building out an internal structure that will enable it to scale — that includes the recent hiring of a CTO.

Berghaeuser explained that the company focuses on larger clients — such as Honda, Lazada and Lion Air — because of their higher average basket size and a higher chance of repeat customers, which he revealed is 60 percent on average. That’s achieved with a few tricks, which includes no design software on the website. Instead, Gogoprint customers upload their completed designs in any format. While he conceded the formats can be a pain, Berghaeuser clarified that the approach minimizes more hobbyist-type business, although he did say that the company is happy to work with customers of all sizes.

Gogoprint claims it grew its customer numbers by 200 percent over the past year but it declined to provide revenue details. Berghaeuser did say the company has a path to profitability that’s helped by “healthy” profit margins of 30-80 percent depending on the product.

Hagenbuch, the early backer of Printi in Brazil, is convinced that Gogoprint is on to a good thing in Asia.

“There are a handful of big-name online printers operating in the region. However, each of them has localized operations as they have been unable to truly expand regionally into Southeast Asia due to operational and market form factors,” he said in a statement

“Gogoprint has found the right formula to win more and more customers by creating true value: providing something that’s better at a cheaper price point, and with enhanced speed to market,” Hagenbuch added.