Instagram and its users do benefit from the app’s ownership by Facebook, which invests tons in new artificial intelligence technologies. Now that AI could help keep Instagram more tolerable for humans. Today Instagram announced a new set of antii-cyberbullying features. Most importantly, it can now use machine learning to optically scan photos posted to the app to detect bullying and send the post to Instagram’s community moderators for review. That means harassers won’t be able to just scrawl out threatening or defamatory notes and then post a photo of them to bypass Instagram’s text filters for bullying.

In his first blog post directly addressing Instagram users, the division’s newly appointed leader Adam Mosseri writes “There is no place for bullying on Instagram . . . As the new Head of Instagram, I’m proud to build on our commitment to making Instagram a kind and safe community for everyone.” The filter for photos and captions rolls out over the next few weeks.

Instagram launched text filtering for bullying in May, but that could have just pushed trolls to attack people through images. Now, its bullying classifier can identify harassment in photos including insults to a person’s character, appearance, well-being, or health. Instagram confirms the image filter will work in feed and Stories. “Although this update only focuses on photos, we will be working to add protections for video, including IGTV, very soon” a spokesperson tells me.

Instagram users will see the “Hide Offensive Comments” setting defaulted on in their settings. They can also opt to manually list out words they want to filter out of their comments, and can choose to auto-filter the most commonly reported words. With text, it’s black and white so Instagram can just block keywords. With images, it won’t let the AI play executioner, and instead uses the filter to direct posts to human moderators who make the final call.

Meanwhile, Instagram is expanding its proactive filter for bullying in comment from the feed, Explore, and profile to also protect Live broadcasts. It’s launching a “Kindness” camera effect in partnership with Maddie Ziegler, best known as the child dancer version of Sia from her music video “Chandelier”. The effect showers your image with hearts and positive comments in different languages while prompting you to tag a friend you care about. It’ll be visible to in users’ camera effects tray if they follow Ziegler, or if they see a friend use it, they can try it themselves. 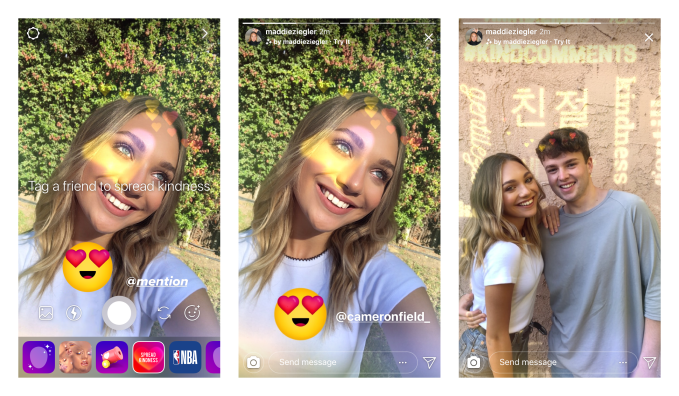 For Instagram to remain the favorite app of teens, it can’t let this vulnerable community be victimized. There’s been a lot of talk about Facebook interfering with Instagram after the photo app’s co-founders resigned. But the parent company’s massive engineering organization affords Instagram economies of scale that unlock tech like this bullying filter that an independent startup might not be able to develop.