SoftBank is getting into self-driving car services after the Japanese tech giant announced a joint-venture with Toyota in its native Japan.

SoftBank is invested in Uber and a range of other ride-hailing startups like Didi in China and Grab in Southeast Asia, but this initiative with Toyota is not related to those deals. Instead, it is designed to combine SoftBank’s focus on internet-of-things technology and Toyota’s connected vehicle services platform to enable new types of services that run on autonomous vehicle tech.

Called MONET — after ‘mobility network’ — the joint venture will essentially assign autonomous vehicles to various different “just in time” services. That just in time caveat essentially means more than on-demand. SoftBank suggests it’ll mean that services are performed in transit. That could be food prepared as it is delivered, hospital shuttles that host medical examinations, or mobile offices, according to examples given by SoftBank. 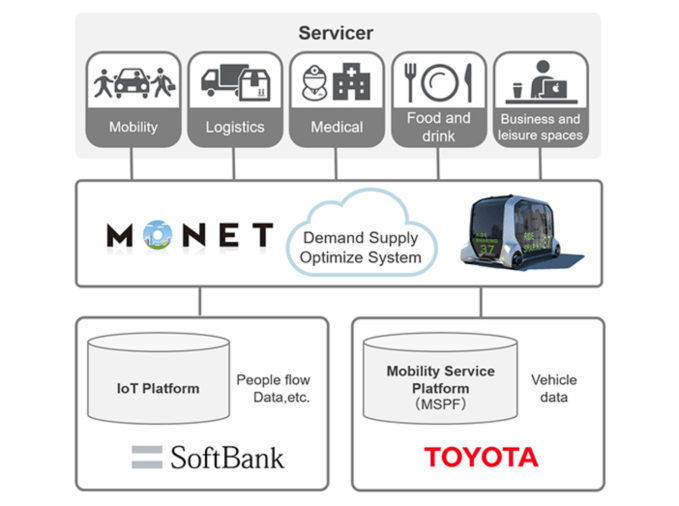 The plan is to use Toyota’s battery-based e-Palette electric vehicles and begin a roll “by the second half of the 2020s.” SoftBank said that the business will be focused on the Japanese market with “an eye to future expansion on the global market.”

Toyota has made strong progress on self-driving vehicles, having debuted its 3.0 self-driving research car earlier this year and then, in March, created a new $2.8 billion business that’s focused on developing requisite software systems. That latter program is designed to work alongside the Toyota Research Institute which, fueled by a $1 billion grant, is pushing the firm’s autonomous tech strategy.

Toyota is also aligned with Uber on ride-hailing. The firm invested $500 million in Uber and $1 billion in Grab via deals this year.

Back in January at CES, Toyota said that it is working with Amazon, Uber, Didi, Mazda and Pizza Hut to develop an electric autonomous shuttle that can be used to deliver people or packages. The business alliances were created to focus on the development of the e-Palette.

SoftBank’s autonomous vehicle projects including a bus that it is developing in partnership with China’s Baidu.