Facebook is getting ready to purposefully influence the U.S. mid-term elections after spending two years trying to safeguard against foreign interference. Instagram plans to run ads in Stories and feed powered by TurboVote that will target all US users over 18 and point them towards information on how to get properly registered and abide by voting rules. Then when election day arrives, users will be able to add an “I Voted” sticker to their photos and videos that link to voting info like which polling place to go to.

Combined, these efforts could boost voter turnout, especially amongst Instagram’s core audience of millennials. If one political party’s base skews younger, they could receive an advantage. “Ahead of National Voter Registration Day, we are helping our community register to vote and get to the polls on November 6th” Instagram writes. “From today, Instagram will connect US voters with the information they need to get registered.” 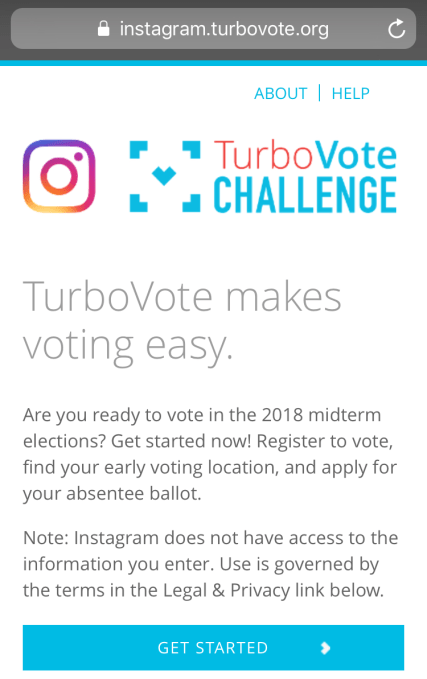 In 2010, a non-partisan “Get out the vote” message atop the Facebook News Feed was estimated to have driven 340,000 additional votes. The study by Nature suggested that “more of the 0.6% growth in turnout between 2006 and 2010 might have been caused by a single message on Facebook”. That’s significant considering the 2000 election had a margin of just 0.1 percent of voters.

You can watch Instagram’s video ads for voting below, which feature a cartoony purple Grimace character and are clearly aimed at a younger audience. They purposefully avoid any Democratic or Republican imagery, but also stick to a polished and American style that could ensure the clips aren’t mistaken for Russian propaganda.

Earlier this year, the company admitted that 120,000 Instagram posts by the Russian military intelligence group the Internet Research Agency reached 20 million Americans in an attempt to sow discord surrounding the 2016 presidential election. They used a variety of image memes about polarizing social issues to try to divide the country. Facebook has since doubled its security staff to 20,000, required identity verification for political advertisers, and has stepped up its effort to delete scores of fake accounts associated with election interference.

The Russian disinformation attacks could still make users weary to learn about voting from social media. But more turnout means a more democratic society, so it’s easy to see the positive impact of Instagram efforts here. The question remains whether this voter drive will end up the subject of congressional scrutiny at another inevitable hearing on social media and political bias.