Becoming an angel investor is simple in principle: have money and invest. Unfortunately for many of the smartest founders in the startup ecosystem, that requirement can prove a complete block on investing in the companies they see day after day, since early liquidity can be hard to find for founders.

Spearhead was launched earlier this year with a mandate to identify promising startup founders and give them cash to invest in startups autonomously. The brainchild of AngelList’s Naval Ravikant and Accomplice’s Jeff Fagnan, the program identifies promising startup founders and provides them with $200,000 of investable capital, and potentially $1 million. It also sets them up with the right legal entities to invest.

It selected its first cohort — a group of 19 founders selected from 1,500 applications — earlier this year, and the program announced that its second cohort is open for applications today.

Ravikant explained to me that Fagnan and him designed Spearhead to be very different from the scout programs offered by venture firms. “This is the first program that is trying to turn you into a capitalist, and not a laborer,” he explained. “Unlike a traditional scout program, we are not training scouts, we are building full-fledged VCs … [The founders] are not getting a slice of carry in a fund, they are getting carry in their own funds.” He emphasized that “this is really about teaching, learning, and scaling the craft of investing.”

Training founders to be angels is a competitive space, with First Round offering an “Angel Track” program that teaches founders and emerging investors the ropes of investing. What makes Spearhead unique is the program’s capital commitment — you don’t just learn to make investments, you actually get a pool of capital by which to invest from.

Since Spearhead creates independent funds for its members, the founders in Spearhead are free to raise additional capital from outside investors and expand their funds beyond Spearhead’s initial seed capital.

Fagnan noted he had some “sleepless nights” as he and Ravikant designed Spearhead. “Just because we put people in this program, we didn’t know if they are going to write a check,” he said. That was particularly true since “we definitely skewed toward people who didn’t consider themselves angels.” Being an operator and being an angel investor require very different skillsets and knowledge, and it wasn’t clear at all that founders could context-switch easily.

The good news: they can. So far, the first cohort has made roughly 50 seed investments into startups, mostly at the pre-seed and seed stages.

One major surprise with the first cohort is that the founders were much more sophisticated about venture capital dynamics than expected. “What we got wrong, we thought we would spoon-feed venture 101,” Fagnan said. But instead, during office hours, “it’s almost the same level of discussion as the principals and partners at Accomplice.”

I talked with six of the founders in the program about their experience. One pattern that came up consistently in my chats is that these founders have all had to go through their own venture capital fundraises, and they wanted to share their lessons learned with other founders to help them succeed and be the kind of venture capitalist that they needed for their own businesses.

For instance, Alice Zhang at Verge Genomics explained that she hoped to use her angel fund to bridge the gap between traditional life sciences investors and a new wave of healthtech startups that are led by computer scientists. “I have a thesis that there will be an explosion of companies that are going to be at the intersection of technology and the life sciences,” she said, but venture capitalists targeting the industry don’t fully see that emerging pattern yet. “I’m spending a lot of time on weekends helping founders in this space.” So far, she has invested in two companies.

That intention to help other founders in a focused industry also applied to Noah Ready Campbell at Built Robotics, who says that when it comes to robotics investing, “a lot of things that were impossible five years ago are possible now.” He saw an opportunity to use his fund to “help participate in the robotics community in the Bay Area” and accelerate the industry. He’s invested in four companies so far, typically with $50k checks.

For others though, it’s less about industry and more about who they know. Alex MacCaw, a well-known JavaScript developer, former Stripe engineer, and founder of Clearbit, told me that a large component of his dealflow is “a bunch of ex-Stripes which I call the Stripe mafia.” He invests very early, and “sometimes there isn’t even a domain name, but I do it based on the fact that I know the founder pretty well.” He’s done five deals so far. 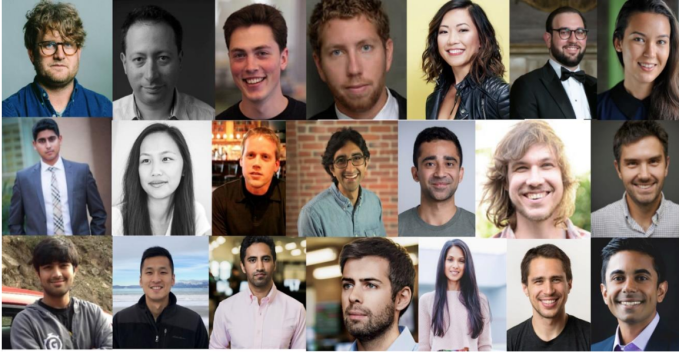 The founders of Spearhead (Image from Spearhead)

Beyond investing in other startups, the founders in the program also emphasized that they are learning from each other. Spearhead hosts a variety of in-person get-togethers, and also holds regular office hours to allow the founders to ask questions and get feedback on their deals from Ravikant and Fagnan, as well as Accomplice’s Cack Wilhelm and AngeList’s Jake Zeller.

Prasanna Sankar, who was director of engineering at Zenefits and left with Zenefits co-founder Parker Conrad to create Rippling, said that one of the biggest things he has had to learn is the difference between angel investing and stock market investing. “We don’t make an investment for the price, so it is like the opposite of the stock market,” he said. “If you are a new angel, it would take five years to have these experiences… but these guys can fast-track your exposure to these things.” He has invested in five startups, mostly at $25k checks and with one at $50k.

Ankur Nagpal at Teachable emphasized that learning from the other founders in the cohort didn’t just train him on being a better angel investor, but also how to operate his business better. “Everyone operates so differently,” he said, and talking with others helped him learn “not just what you should be doing, but also about how you are different from other businesses.”

Fagnan noted that a large priority in the first cohort was geographical representation, and he expected that Spearhead would design its next cohort to have “fewer people taking deeper accountability to each other.”

The next-generation of venture capitalists?

For Ravikant and Fagnan, the dream of their program was to create the next-generation of competent and committed angel investors scattered around the country. They have certainly gotten that plan underway, but the question is how far will these cohort members go in their investing careers?

Many founders I talked to insisted that their focus remains 100% on their companies, and that angel investing as just a side passion. Outside of MacCaw at Clerabit, almost no one was intending to scale up their funds beyond the initial seed capital, and even MacCaw was just looking to have a little more cash to invest since he has already invested his whole fund.

Ultimately, that might play well for Spearhead, since one of the challenges of traditional venture capital funds is their increasing scale. Ravikant noted that the sort of pre-seed checks that these investors are writing are hard for venture capital firms to do given their size.

Sankar said that “I always thought that Silicon Valley startup as an asset class is one of the most undervalued and underrated.” That seems to match Ravikant’s entire mantra, who told me that “I want to quintuple down on [Spearhead].” He hopes that more of his founders can build distinguished track records, and become the leading angel investors of their generation. We hope that they are “going to be bigger than Naval and Jeff sometime, and if not, then we have failed.”

The story was updated to fix Noah Ready Campbell’s startup name. It is Built Robotics, not Ready Robotics.