False rumors forwarded on WhatsApp have led angry mobs to murder strangers in India, but the Facebook-owned chat app is still racing to add users in the country. Today it launched a feature phone version of WhatsApp for JioPhone 1 and 2’s KaiOS, which are designed to support 22 of India’s vast array of native languages. Users will be able to send text, photos, videos and voice messages with end-to-end encryption, though it will lack advanced features like augmented reality and Snapchat Stories-style Status updates.

WhatsApp was supposed to launch alongside the JioPhone 2 that debuted last month for roughly $41, but was delayed. Forty million JioPhone 1s had already been sold, and it’s been estimated to control 27 percent of the Indian mobile phone market and 47 percent of the country’s feature phone market. Coming to JioPhone should open up a big new growth vector for WhatsApp as it strives to grow its 1.5 billion user count toward the big 2 billion milestone.

Meanwhile, it could make the Reliance-owned Jio mobile network more appealing. It also could strengthen the KaiOS operating system, developed by a San Diego startup of the same name that recently took a $22 million investment from Google. WhatsApp rolls out on the JioPhone AppStore today and should be available to everyone by September 20th. The companu wouldn’t say if the app will come to other KaiOS devices made by Nokia and Alcatel.

Facebook has started to squeeze WhatsApp, replacing its departed co-founders with Chris Daniels, who formerly ran the Internet.org and Free Basics accessibility initiative that got kicked out of India over net neutrality concerns. That doesn’t bode well for him now overseeing WhatsApp’s high-risk/high-reward scenario in India. The massive nation is core to the chat app’s growth strategy, but the attacks it’s spurred have lost it India’s hearts and minds.

WhatsApp has scrambled to safeguard its app after numerous reports of rumors circulated on its app about gangs and child abductors led angry mobs to kill people in the streets. Five nomads were recently beaten to death in the rural village of Rainpada after residents watched inaccurate videos forwarded through WhatsApp about kidnappers supposedly rolling through the area, BuzzFeed reports. 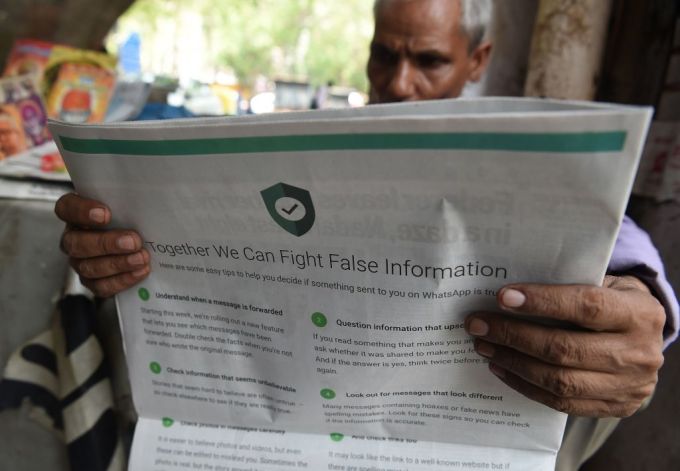 This photo illustration shows an Indian newspaper vendor reading a newspaper with a full back page advertisement from WhatsApp intended to counter fake information, in New Delhi on July 10, 2018. – Facebook owned messaging service WhatsApp on July 10 published full-page advertisements in Indian dailies in a bid to counter fake information that has sparked mob lynching attacks across the country. (Photo by Prakash SINGH / AFP) (Photo credit should read PRAKASH SINGH/AFP/Getty Images)

WhatsApp recently limited how many people you can forward a message to, labeled forwarded messages, and began a radio PSA campaign in Hindi on 46 India stations warning people to verify things they hear on WhatsApp before acting on them.

“The challenge of mob violence requires action from governments, civil society, and technology companies. That’s why WhatsApp launched a broad user education campaign over radio in India and is working with Jio to educate new users about misinformation” a WhatsApp spokesperson tells me. “WhatsApp was built as an alternative to SMS messaging and we think people should be able to text their loved ones across borders without paying exorbitant charges to do so.”

But it’s clear that parent company Facebook sees spreading WhatsApp as part of its mission to bring the world closer together, even as that comes at a cost. The government has pushed WhatsApp to build workarounds for its encryption to identify the source of rumors and misinformation videos. But a WhatsApp spokesperson told BuzzFeed News that “We believe that building ‘traceability’ into WhatsApp would undermine end-to-end encryption and the private nature of WhatsApp creating the potential for serious misuse . . . we will not weaken the privacy protections we provide.”

Jio’s “transition” phones that offer a few third-party apps but not full-fledged smartphone capabilities, alongside its affordable mobile data, have significantly reduced the cost and friction of being online in India. But with that access comes newfound dangers, especially if not combined with news literacy and digital skills education that could help users spot false information before it sparks violence. Lower income users interested in Jio’s feature phones may have even less access to the education needed to not believe everything they read on WhatsApp. What was once a smartphone problem is becoming an every phone problem.

Increasingly the tech world is learning that connecting people to the internet also means connecting them to the worst elements of humanity. That will necessitate a new wave of pessimists and cynics as product managers in order to predict and thwart ways to abuse software instead of allowing idealists to blindly build tools that can be weaponized.