Just about a month after the merger of the short-form video apps Musical.ly and TikTok, the app is introducing a new social feature, allowing users to post their reactions to the videos that they watch.

Instead of text comments, these reactions will take the form of videos that are essentially superimposed on top of existing clips. The idea of a reaction video should be familiar to anyone who’s spent some time on YouTube, but TikTok is incorporating the concept in way that looks like a pretty seamless.

To post a reaction, users just need to choose the React option in the Share menu for a given video. The app will then record your audio and video as the clip plays. You can also decide where on the screen you want your reaction video to appear.

If you don’t recognize the TikTok name, that’s probably because the app only launched in the United States at the beginning of August, but it’s been available in China for a couple of years. 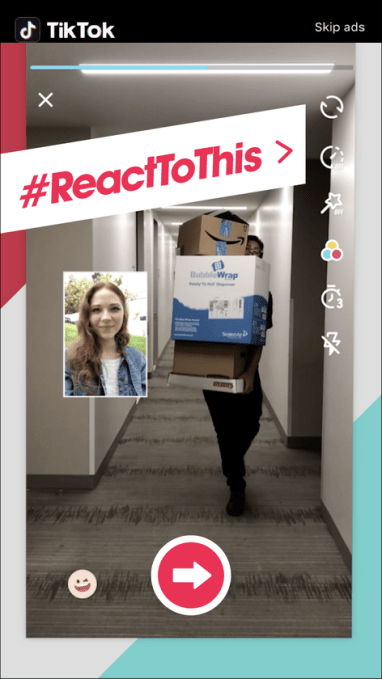 Back in 2017, Bytedance — the Chinese company behind TikTok as well as news aggregator Toutiao — acquired Musical.ly for around $1 billion. It eventually merged the two apps to combine their audiences and features; Musical.ly users were moved over with their existing videos and settings.

The company says Reactions will be available in the updated app on Google Play and the Apple App Store over the next day or two.