Last month Google rolled out a Maps’ “match” feature which purported to predict how much you’d like a particular place, like a restaurant or bar. The feature uses the data it has on you, such as the backlog of places it knows you’ve visited, and what it can assess as your dining preferences. Look up Thai food restaurants regularly? Maps will show you similar places in the area with a high-match percentage attached to them.

Yelp and Foursquare have been trying something similar out for years. But both the AI approach and the ‘five star rating’ approach hardly appears to this new generation of users.

Now a startup out of Berlin wants to do something similar, but it wants to crowdsource that information in a simpler, easier way than other apps before it.

The YOBO app (iOS/Android) takes a new approach, likely to appeal to the Millennial and Gen-Z generations. Instead of building its location-based data and recommendations on set words and ratings, it’s using, yes, emojis and photos. What more could the Instagram generation want?

Emojis are used billion of a times a day and have been described as the fastest growing language in history. Many people, young people especially, find it easier to communicate using its smiley faces and icons than text. We saw Apple introduce Animojis and this trend is expected to grow even further. YOBO is using emojis as training data for people’s preferences for places.

There’s another problem the app is trying to solve: the fact that many places that might have been previously worth visiting are now crowded with tourists.

As co-founder Tobias Szarowicz says: “Because we were using Yelp, Foursquare, Tripadvisor and Google to plan a weekend trip to Prague, we ended up with the same annoying stag party at almost every place we went. The reason for that was simple: we all put the same popular bars, restaurants and clubs on our list and ended up at the most touristic places in town. This experience made us think about how we could use technology to personalise the real hyperlocal world around us, so people could feel local wherever they are.” YOBO is now live on iOS with users sharing across major cities like Berlin, Hamburg, London and Amsterdam.

The idea is that users share photos of locations and rate and categorise these places using emojis. These posts are then compiled into other users’ individual recommendations based on their current location. Over time, the app also claims to learn the habits of its users and recommends only places that suit them personally – along with considering the weather, the time-of-day, their activity and personal preferences.

Using Emojis to rate places is a simple and fast way for people can express their emotions. Because they are likely to get more data down to its ease of use, YOBO can use machine learning to begin to recommend local spots the user might personally like rather than just the most popular ones.

This problem about location popularity was acutely illustrated recently when “The Shed at Dulwich” became the No. 1 restaurant on TripAdvisor earlier this year. The problem was, it was fake. A London-based writer wanted to illustrate how easy it is to manipulate review sites like TripAdvisor, Yelp, Foursquare and Google, by pushing an entirely non-existent restaurant to the top spot in London. And he achieved it.

The makers of YOBO say this wouldn’t be possible because, on YOBO, users who rate things always need to be near the place they are rating. 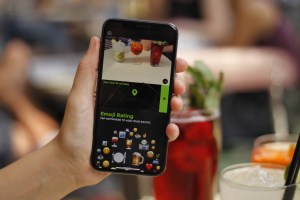 Additionally, using image recognition, the app can draw conclusions on the nature of a specific place. For example, if someone shares a photo of a cup of coffee, the app knows that people can get coffee at that location and can categorise it as a breakfast or lunch place. YOBO claims this works for any specific food or any other object recognised on a picture. All recommendations are shown in a personalised places-feed.

By tapping on a specific place, the user gets presented with more details about it. Together with a gallery of images and a map, all additional information is displayed visually in an emoji cloud. The bigger the emoji the more relevant it is.

On the profile-page users can find the whole collection of places they shared and ‘bucket-listed’. The specific local taste of each user is displayed in an emoji-cloud on top of the profile page. The bigger the emoji the more relevant it is for the user’s individual taste. You can’t ‘follow’ someone on the app in the way you do on Twitter, but if someone posts a photo he or she will get notified if someone else rated that photo with emojis.

Unlike Yelp, Tripadvisor, Google, Foursquare YOBO is 100% visual. All information about a place is displayed in pictures and emojis, no text at all. For the generation it’s targeting, that speaks to their world.

How the app plans to make money is to be explored, but the startup believes there is still no efficient and convenient marketing solutions for local owner-managed businesses, so in theory they could build-in more personalised discounts to venues.

Last winter the company closed a small pre-seed-round to get the app ready for market and is now raising a seed round to enter new European cities.