The interconnectedness of the cloud has allowed us to share content widely with people inside and outside the organization and across different applications, but that ability has created a problem of its own, a kind of digital fragmentation. How do you track how that piece of content is being used across a range of cloud services? It’s a problem Box wants to solve with its latest features, Activity Stream and Recommended Apps.

The company made the announcements at BoxWorks, its annual customer conference being held this week in San Francisco,

Activity Stream provides a way to track your content in real time as it moves through the organization, including who touches it and what applications it’s used in, acting as a kind of digital audit trail. One of the big problems with content in the cloud age is understanding what happened to it after you created it. Did it get used in Salesforce or ServiceNow or Slack? You can now follow the path of your content and see how people have shared it, and this could help remove some of the disconnect people feel in the digital world.

As Jeetu Patel, Box’s Chief Product and Chief Strategy Officer points out, an average large company could have more than a thousand apps and there is no good way to connect the dots when it comes to tracking unstructured content and getting a unified view of the digital trail.

“We integrate with over 1400 applications, and as we integrate with those applications, we thought if we could surface those events, it would be insanely useful to our users,” he said. Patel sees this as the beginning of an important construct, the notion of a content hub where you can see the entire transaction record associated with a piece of content. 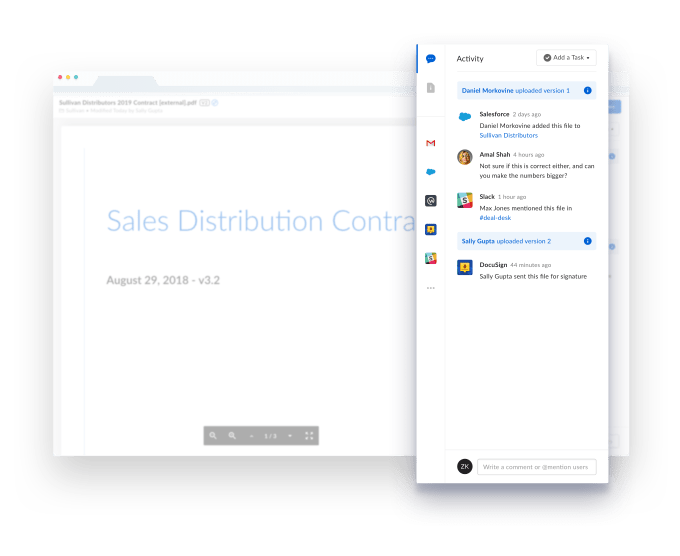 But Box didn’t want to stop with just a laundry list of the connections. It also created deep links into the applications being used, so a user can click a link, open the application and view the content in the context of that other application. “It seems like Box was a logical place to get a bird’s eye view of how content is being used,” Patel said, explaining Box’s thinking in creating this feature.

A related feature is a list of Recommended Apps. Based the Box Graph, and what Box knows about the user, the content they use, and how it’s interconnected with other cloud apps, it also displays a list of recommended apps right in the Box interface. This lets users access those applications in the context of their work, so for instance, they could share the content in Slack right from the document. For starters, Recommended Apps integrations include G Suite apps, Slack, Salesforce, DocuSign and Netsuite, but Patel says anyone who is integrated with the web app via the API will start showing up in Activity Stream.

While the products were announced today, Box is still working out the kinks in terms of how this will work. They expect these features to be available early next year. If they can pull this off, it will go a long way toward solving the digital fragmentation problem and making Box the content center for organizations.