People don’t eat enough fruit and vegetables, that’s despite an embarrassment of options today that include fast grocery delivery and takeout services with a focus on health.

A study from the U.S-based Center for Disease Control and Prevention (CDC) released last November found that just one in ten adults in America “meet the federal fruit or vegetable recommendations” each day. The bar isn’t that high. The recommendation is just 1.5-2 cups of fruit and two to three cups of vegetables per day, but failing to meet it can put people at risk of chronic diseases, the CDC said.

The problem is universal the world over, but perhaps most acute in the U.S, where finding healthy food is easier than ever. Amazon’s same-day grocery deliveries, make-it-at-home services like Blue Apron and various healthy takeout services have helped some people, but no doubt there’s much more to be done for standards to be raised across the nation and beyond.

That’s where one early-stage startup, Kencko, is aiming to make a difference by making fruit and vegetable more accessible. Its thesis is that wholly organic diets are daunting to most, but packaging the good parts in new ways can make it easier for anyone to be more healthy.

The company’s first offering is a fruit drink that can be made in minutes using just a sachet, water and its mixer bottle. 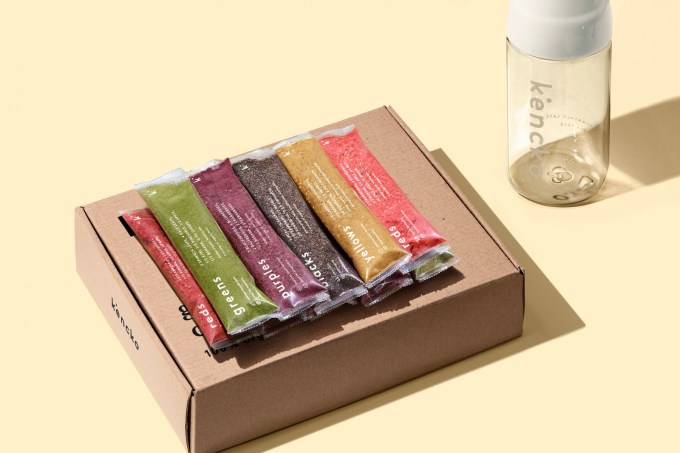 Unlike other ‘instant’ mixer options, Kencko uses freeze-drying to turn fruit and vegetable mixes into powder without compromising on health. That process — which is similar to how NASA develops food for astronauts — retains minerals, protein, vitamins and all the other good stuff typically lost in healthy drinks, the startup said. The fruit and vegetables used are organic and sourced from across the world — that’s broken down into more details on the Kencko website — while the mixes don’t contain sugar or other additives.

Kencko customers make their drink by mixing the sachet with water and shaking for one minute. Each sachet is 20g and, when combined with water, that gets you a 160g serving. That’s around two daily portions, and it  has a 180-day shelf live so it can keep. There are six different combinations, each one is a mixture of six fruit and vegetables.

Unlike others that pair with water, Kencko actually includes fruit pieces and seeds — I tested a batch. That’s pretty unique, although it is worth noting that some of the more berry fruit heavy combinations mix less efficiently than the plant-based ones, at least from my experience. As someone who lives in a city where fresh fruit and vegetables are easily found — thank you, Bangkok — I’m not the target customer. But I can readily recall living the busy 9-6 office life in London a decade ago, and back then I’d have been curious enough to at least take Kencko for a spin in my quest to be a little healthier.

Kencko is also affordable when compared to most health food options, which tend to be positioned as premium. 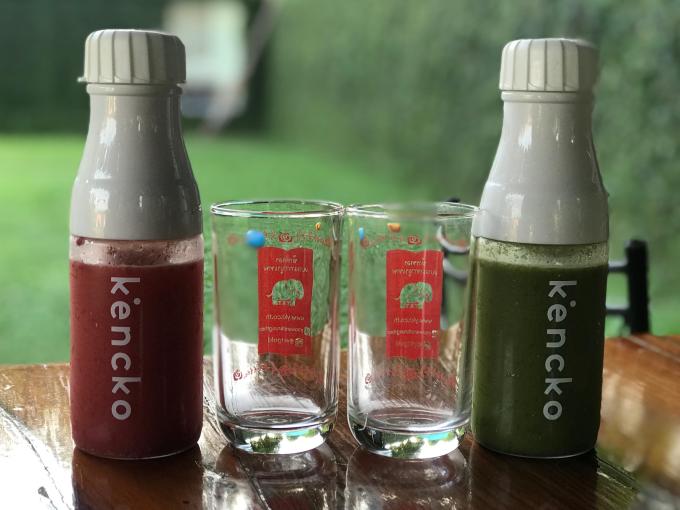 Two of my Kencko mixes

Kencko — which means health in Japanese — is the brainchild of Tomás Froes, a former tech worker who got into veganism after being diagnosed with acute gastritis.

Froes, who is from Portugal and once ran an artisanal hot dog brand in China, was told that his ailment was treatable but that it would require a cocktail of pills for the rest of his life. Seeking an alternative, he threw himself into the world of alternative health and, after settling on a 90 percent fruit and vegetable diet, found that his condition had cleared without medicine.

Keen to help others enjoy the benefits of his journey, he began talking to nutritionists and experts whilst trying to figure out possible business options. In an interview with TechCrunch, Froes said he settled on a new take on the existing ‘health drink’ space that he maintains is inadequate in a number of ways.

“The end goal is to help consumers reach the recommendation of five servings/portions of fruit a day,” he explained. “That would be impossible to do if we excluded the seeds and bits of fruits like cold-pressed juice companies do. They press the juice out of the fruits, leaving the most nutritional part from pulp and the seeds out.”

“We blast freeze fruit and vegetables at -40 degrees which allows us to maintain the same nutritional properties as fresh fruit for longer periods. We then use a slow heat process of 60 degrees to evaporate only take the water-based parts without damaging nutrition,” Froes added.

Added that, Froes said, Kencko helps cut down on the use of plastic by using the same mixer, return customers only require new sachets.

As proof of Kencko’s versatility, he brought his mixer and sachets along to the vegan cafe we met at earlier this year when I visited London, putting me to shame for buying the cold pressed option — which was no doubt more expensive, to boot.

Kencko is based in New York but with a processing facility in Lisbon, Portugal. It is heavily focused on the U.S. market where it offers delivery in 24-48 hours, but it also covers the UK and Canada. There are plans to increase support, particularly in Asia. 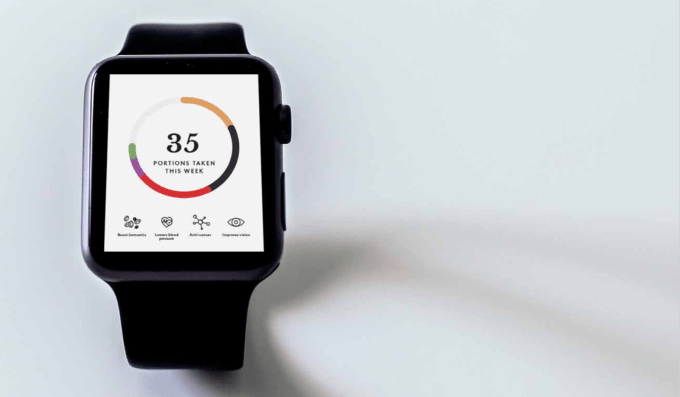 Kencko’s Apple Watch app is in beta with selected users

Kencko was formed in 2017 and, after landing undisclosed seed funding, it launched its product in March of this year. Already it has seen progress; the startup recently entered the TechStars accelerator program in London as one of a batch of ten companies.

“I’m excited to work with Tomas and the Kencko team,” Eamonn Carey, who leads TechStars in London, told TechCrunch. “I first read about them on ProductHunt and bought into their mission straight away. Once I tasted the product for the first time, I was sold — both as a subscriber and an investor.”

Froes told TechCrunch that drinks are just the first phase of what Kencko hopes to offer consumers. He explained that he wants to move into other types of food and consumables in the future to help give people more options to get their daily portion of fruit and vegetables.

Up next could be Apple-based snacks. Foes shared — quite literally — a new batch of snack that’s currently in development and is made from the fruit. He believes it could be marketed a healthier option than crisps and other nibbles people turn to between meals. Further down the pipeline, he said, will be other kinds of food that maintain the 100 percent organic approach.

Beyond food, Kencko wants to build a close bond with its customers. It is developing iOS and Apple Watch apps that help its users to track their fruit and vegetable consumption, and more generally make their diet and routine healthier.

With the membership package and apps, it becomes clear that Kencko aspires to build a brand and not just sell a product online. That’s double the challenge (at least), and that makes the company one to watch.

Already it has found some success within tech circles such as TechStar’s Carey — people who aspire to eat and drink better but are pushed for time — but if Froes is to even begin to deliver on his mission then Kencko will need to go beyond the tech industry niche and attract mainstream consumers. For now though, the product is worth close inspection if you think your lifestyle is in need of a fruit boost.