Korean automaker Hyundai is jumping into India’s on-demand mobility space after it led a $14.3 million investment in car-rental startup Revv.

Hyundai, which is the second largest seller of cars in India, initially announced an undisclosed investment in Revv this week, but now the startup has confirmed that the capital is part of a larger 100 Crore INR (~$14.3 million) Series B round.

Other investors in the round include Japan’s Dream Incubator, Telama Investment and Sunjay Kapoor of auto component firm Sona BLW. Existing investors Edelweiss and Beenext also took part in the deal, which takes Revv to $23 million raised from investors, according to data from Crunchbase.

Revv was founded in 2015 and it offers on-demand car rentals using a model similar to Zipcar in the U.S. The startup is currently active in 11 cities in India with a fleet of around 1,000 vehicles. It claims to have served 300,000 users to date. One of its hallmarks is doorstep delivery and collection from customers, which eschews the usual process of designated collection and return locations.

In an interview with TechCrunch, Revv co-founders Anupam Agarwal (CEO) and Karan Jain (COO) said the plan is to expand to 30 cities over the next 12-18 months while growing the fleet size to 10,000-12,000. The duo said that the investment from Hyundai didn’t include any specific clause to provide vehicles, but that it is possible that an agreement may be reached in the future.

Beyond potential support on growing the fleet, Agarwal and Jain said that Revv plans to tap Hyundai for its knowledge in vehicles, including performance upkeep, maintenance of cars and more, and other tech areas as it builds out its platform and new products.

A photo of the Revv team

That’s because the startup’s expansion plan goes beyond new geographies to include different types of services, too.

Right now, Revv offers on-demand car rentals and a subscription-based product — Switch — that is designed for power-users, but Agarwal and Jain want to introduce more modular and flexible products. Already Shift users account for around one-third of rentals, but Revv wants to go further.

Agarwal and Jain hinted that could range from shorter time “on-demand” rentals, such as within 15 minutes, to longer-term alternatives to car ownership that remain financial commitments of loans and repayments.

“We are looking at innovative business models that we can take to the consumer,” the Revv co-founders said. “We understand that the traditional model of car ownership will be diluted and alternative options of accessible mobility will be the norm.

“Cabs solve point A to B in 40 minutes, but every other need is still a largely unsolved problem in this country. India is unique [and the need for] mobility solutions is far higher because 98 percent of people don’t own cars,” they added.

While taxi on-demand apps like Ola and Uber are making the cab experience better in India, Revv believes it can address other needs like out of town trips, long-distance commuting and other requirements that it believes are common among Indian consumers. Longer term, the startup’s aim is to grow the ‘automobile access’ rate to 50 percent across India to help cover these gaps. 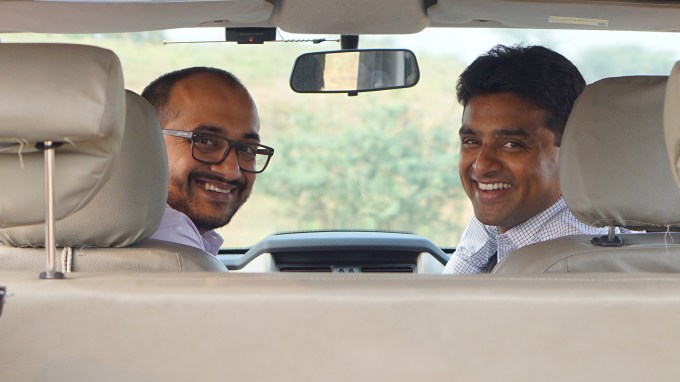 With this new funding in the bag, Revv aims to amp up its business with a “slew” of new products. Agarwal and Jain said the target is to increase revenue 10X, going from $10 million ARR right now to $100 million within 18 months.

They believe that these new services are essential and that they could account for half of that revenue target. They also plan to increase marketing spend to grow the brand, having previously focused on user retention, according to Agarwal and Jain.

When asked about the potential to add two-wheeled transportation — given the growth of startups in that space, such as Sequoia-backed Bounce — the duo, who both spent time with McKinsey, said they would remain focused on cars for at least the next year.

“We feel there’s a huge opportunity that hasn’t been tapped into,” they said.

Revv’s chief domestic rival is Zoomcar, which raised $40 million earlier this year and is backed by the likes of Ford and Mahindra & Mahindra. Zoomcar has already moved into two-wheelers, and its big differentiator is a program that allows existing car owners to lease out their vehicles by adding them to the Zoomcar fleet. The five-year-old startup is also considering overseas expansion.

Elsewhere, other competitors include Voler, Drivezy and Carzonrent.