Braavo, a startup that provides financing to mobile app developers, is announcing that it has raised $6 million in Series A funding.

The might not seem like much compared to the $70 million that Braavo announced raising last year, but that was debt financing, used to loan money to developers. This new round is equity financing, used to fund Braavo’s own operations and growth.

Co-founder Mark Loranger told me Braavo was founded in 2015 in response to the “new dynamics” of mobile app businesses. And it’s worked with developers including Verv, Fanatee and Pixite.

“The data is there to create ways to provide financing to companies that otherwise would have to raise more [venture funding] and dilute themselves,” Loranger said.

For its first financing product, Braavo looks at Apple App Store and Google Play data, specifically the amount of money already earned by an app but not yet paid out. It can then provide an advance on some of that revenue.

Loranger described Braavo’s newer product as “more exciting” and “more data-driven.” It looks at user acquisition, user engagement and revenue, projecting how revenue would grow if a developer had more money for user acquisition — and then it can provide debt financing for that growth. 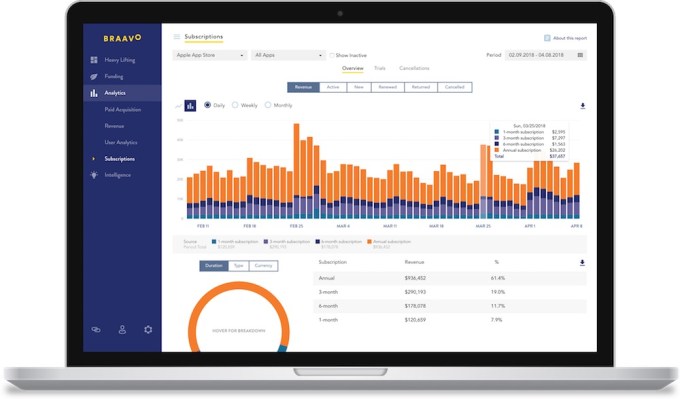 Braavo gets paid back as “a fixed percentage of future earnings,” Loranger said, so its incentives are aligned with the developers: “We only make our money back as they earn more revenue in the future.” And if app revenue doesn’t grow as anticipated, that just means Braavo gets paid back more slowly.

The company is also announcing the launch of a new analytics product that will allow businesses to track key metrics like the lifetime value of their customers.