In July 2018, the tech sector’s leisure class — venture capitalists — kicked investments into overdrive, at least when it comes to financing supergiant venture rounds of $100 million or more (in native or as-converted USD values).

With 55 deals accounting for just over $15 billion at time of writing, July likely set an all-time record for the number of huge venture deals struck in a single month.

The table below has just the top 10 largest rounds from the month. (A full list of all the supergiant venture rounds can be found here.) 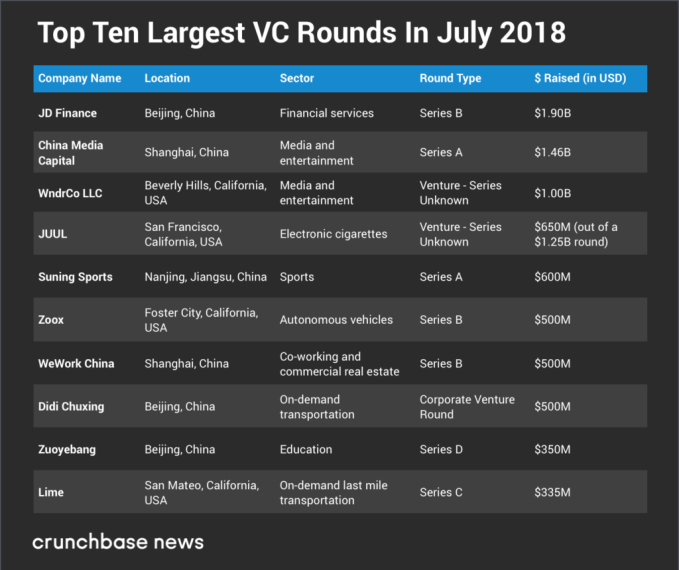 It’s certainly a record high for the past decade. Earlier this month, we set out to find when the current mega-round trend began. We found that, prior to the tail end of 2013, supergiant VC rounds were relatively rare. In a given month between 2007 and the start of the supergiant round era, a $100 million round would be announced every few weeks, on average. And many months had no such deals come across the wires.

Of course, that hasn’t been the case recently.

Why is this happening? As with most things in entrepreneurial finance, context matters.

There are some obvious factors to consider. At the later-stage end of the spectrum, the market is currently awash in money. Billions of dollars in dry powder is in the offing as venture investors continue to raise new and ever-larger venture funds. All that capital has to be put to work somewhere.

But there’s another, and perhaps less obvious, cog in the machine: the changing part VCs play in a company’s life cycle. The current climate presents a stark contrast to the last time the market was this active (in the late 1990s). Back then, companies looking to raise nine and 10-figure sums would typically have to turn to private equity firms or boutique late-stage tech investors, or raise from the public market via an IPO.

Now some venture capital firms are able to provide financial and strategic support from the first investment check a private company cashes to when it goes public or gets acquired. On the one hand, this prolongs the time it takes for companies to exit. But on the other, some venture firms get to double, triple and quadruple down on their best bets.

But as in Newtonian physics, a market that goes up will also come down. The pace of supergiant funding announcements will have to slow at some point. What are some of the potential catalysts for such a slowdown? Keep an eye out for one or more of the following:

All this being said, there’s little sign that the market is slowing down. Crunchbase has already recorded four rounds north of $100 million in the first two days of August. Most notably, ride-hailing company Grab snagged another $1 billion in funding (after gulping down $1 billion last month) at a post-money valuation of $11 billion.

If you believe the stereotypes, venture investors are either already on vacation or packing their bags for late summer jaunts to exotic locales at this time of year. But, as it turns out, raising money is always in season. So even though the dog days of summer are upon us, August could end up being just as wild as July.