Boston has regained its longstanding place as the second-largest U.S. startup funding hub.

After years of trailing New York City in total annual venture investment, Massachusetts is taking the lead in 2018. Venture investment in the Boston metro area hit $5.2 billion so far this year, on track to be the highest annual total in years.

The Massachusetts numbers year-to-date are about 15 percent higher than the New York City total. That puts Boston’s biotech-heavy venture haul apparently second only to Silicon Valley among domestic locales thus far this year. And for New England VCs, the latest numbers also confirm already well-ingrained opinions about the superior talents of local entrepreneurs.

“Boston often gets dismissed as a has-been startup city. But the successes are often overlooked and don’t get the same attention as less successful, but more hypey companies in San Francisco,” Blake Bartlett, a partner at Boston-based venture firm OpenView, told Crunchbase News. He points to local success stories like online prescription service PillPack, which Amazon just snapped up for $1 billion, and online auto marketplace CarGurus, which went public in October and is now valued around $4.7 billion.

Meanwhile, fresh capital is piling up in the coffers of local startups with all the intensity of a New England snowstorm. In the chart below, we look at funding totals since 2012, along with reported round counts. 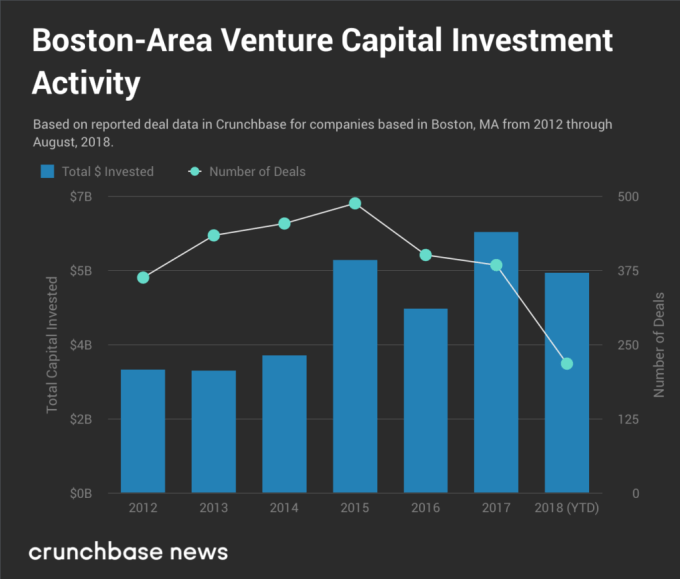 In the interest of rivalry, we are also showing how the Massachusetts startup ecosystem compares to New York over the past five years. 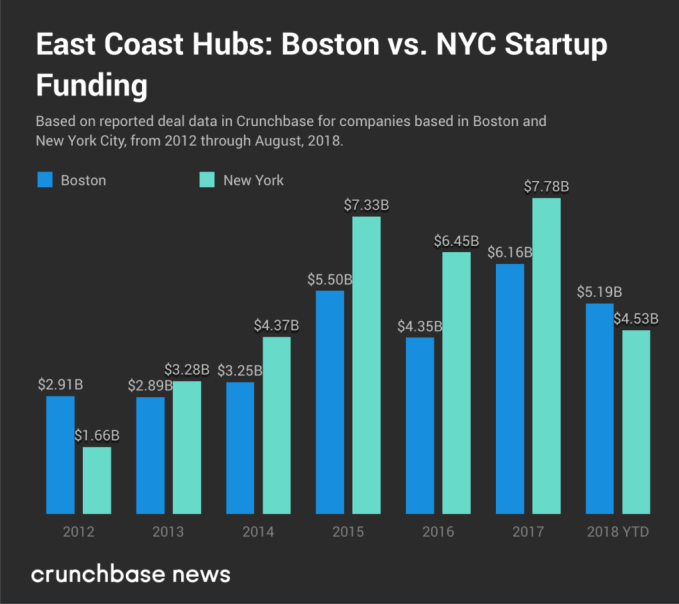 So what’s the reason for Boston’s 2018 successes? It’s impossible to pinpoint a single cause. The New England city’s startup scene is broad and has deep pockets of expertise in biotech, enterprise software, AI, consumer apps and other areas.

Still, we’d be remiss not to give biotech the lion’s share of the credit. So far this year, biotech and healthcare have led the New England dealmaking surge, accounting for the majority of invested capital. Once again, local investors are not surprised.

“Boston has been the center of the biotech universe forever,” said Dylan Morris, a partner at Boston and Silicon Valley-based VC firm CRV. That makes the city well-poised to be a leading hub in the sector’s latest funding and exit boom, which is capitalizing on a long-term shift toward more computational approaches to diagnosing and curing disease.

Moreover, it goes without saying that the home city of MIT has a particularly strong reputation for so-called deep tech — using really complicated technology to solve really hard problems. That’s reflected in the big funding rounds.

For instance, the largest Boston-based funding recipient of 2018, Moderna Therapeutics, is a developer of mRNA-based drugs that raised $625 million across two late-stage rounds. Besides Moderna, other big rounds for companies with a deep tech bent went to TCR2, which is focused on engineering T cells for cancer therapy, and Starry (based in both Boston and New York), which is deploying the world’s first millimeter wave band active phased array technology for consumer broadband.

Other sectors saw some jumbo-sized rounds too, including enterprise software, 3D printing and even apparel.

Boston also benefits from the rise of supergiant funding rounds. A plethora of rounds raised at $100 million or more fueled the city’s rise in the venture funding rankings. So far this year, at least 15 Massachusetts companies have raised rounds of that magnitude or more, compared to 12 in all of 2017.

Exits are happening, too

Boston companies are going public and getting acquired at a brisk pace too this year, and often for big sums.

At least seven metro-area startups have sold for $100 million or more in disclosed-price acquisitions this year, according to Crunchbase data. In the lead is online prescription drug service PillPack. The second-biggest deal was Kensho, a provider of analytics for big financial institutions that sold to S&P Global for $550 million.

IPOs are huge, too. A total of 17 Boston-area venture-backed companies have gone public so far this year, of which 15 are life science startups. The largest offering was for Rubius Therapeutics, a developer of red cell therapeutics, followed by cybersecurity provider Carbon Black.

Meanwhile, many local companies that went public in the past few years have since seen their values skyrocket. Bartlett points to examples including online retailer Wayfair (market cap of $10 billion), marketing platform HubSpot (market cap $4.8 billion) and enterprise software provider Demandware (sold to Salesforce for $2.8 billion).

Recollections of a frigid April sojourn in Massachusetts are too fresh for me to comfortably utter the phrase “Boston is hot.” However, speaking purely about startup funding, and putting weather aside, the Boston scene does appear to be seeing some real escalation in temperature.

Of course, it’s not just Boston. Supergiant venture funds are surging all over the place this year. Morris is even bullish on the arch-rival a few hours south: “New York and Boston love to hate each other. But New York’s doing some amazing things too,” he said, pointing to efforts to invigorate the biotech startup ecosystem.

Still, so far, it seems safe to say 2018 is shaping up as Boston’s year for startups.