“I tried walking around in a Homer mask, but the latex is hard to breathe in. My head gets so sweaty and my glasses fog up. It’s not worth it for me,” Matt Groening laughs. “But what a way to go, suffocating on a Homer Simpson mask.”

The cartoonist bemoans his inability to go incognito on a recent trip to San Diego Comic-Con. It would be a poetic death, perhaps, asphyxiating beneath the likeness of his most iconic creation. But he doesn’t want to make the headline writers’ jobs too easy when he finally casts off this mortal coil.

“Years ago, there was an airline that did a promotion, where they painted The Simpsons on the side,” Groening adds. “We all drove out to give it a send off, and the entire crew got on the plane in Burbank and road it around in a circle and it came down. One other writer and I refused to get on the plane, because we didn’t want the jokes that would invariably come if the plane were to crash. That’s not how we wanted to be remembered.” 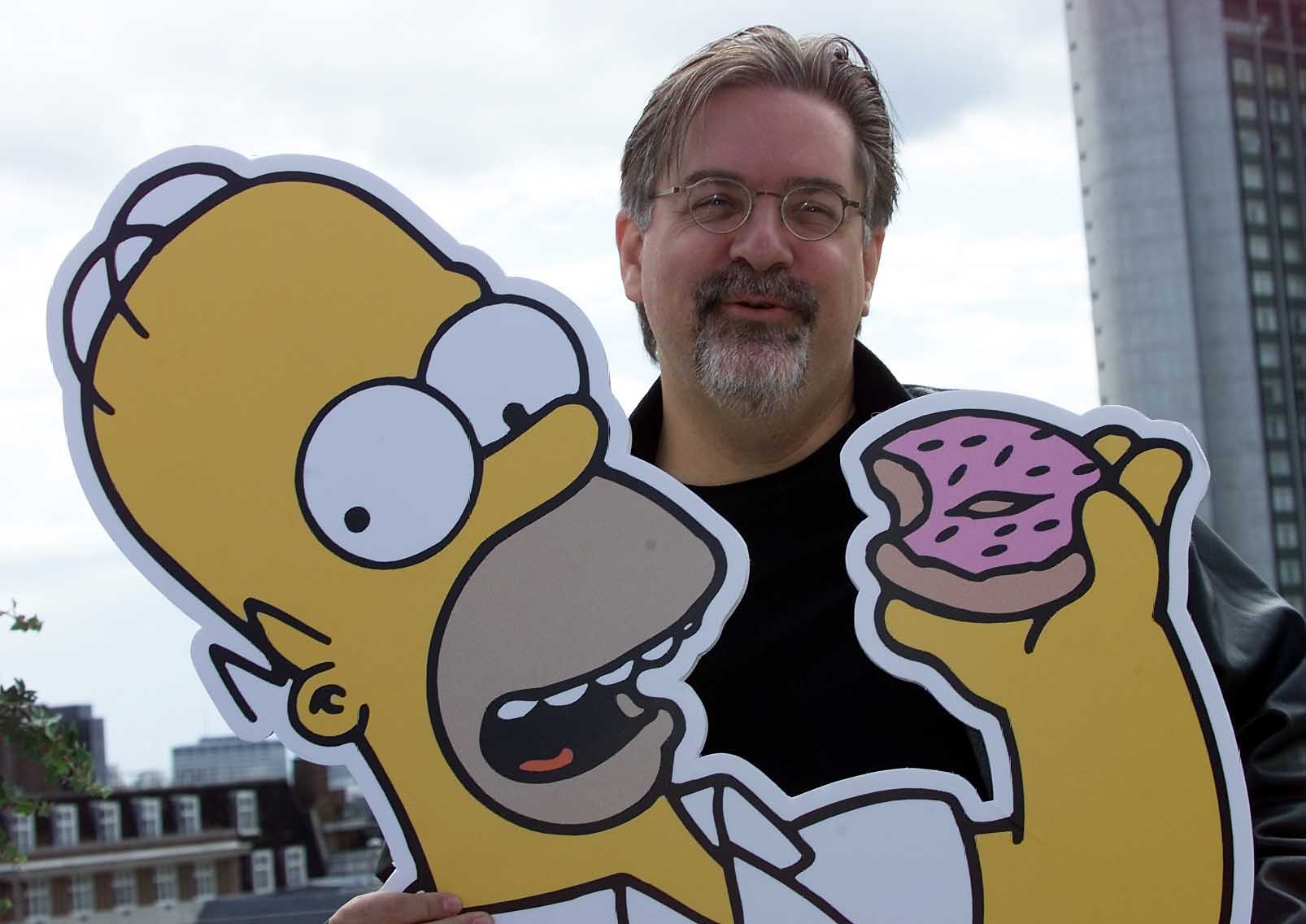 The Simpsons will forever loom large over Groening’s existence. Spawning 30 seasons of a nearly universally beloved television program will do that to a legacy. And most recently, the show and its creator have been grappling with the topic of embattled character Apu — which he’s addressed with mixed results and was intent on not discussing on our call.

In recent weeks, the artist has been single-mindedly focused on Disenchantment, with one final promotional push before the series makes its mid-August Netflix debut.

The show has some seemingly impossible expectations to live up to as Groening’s third animated series. Its predecessor, Futurama, while failing the nearly impossible task of maintaining the ubiquity and longevity of The Simpsons, has become a beloved franchise in its own right, living on beyond its two-network running through constant syndication and an endless stream of memes. 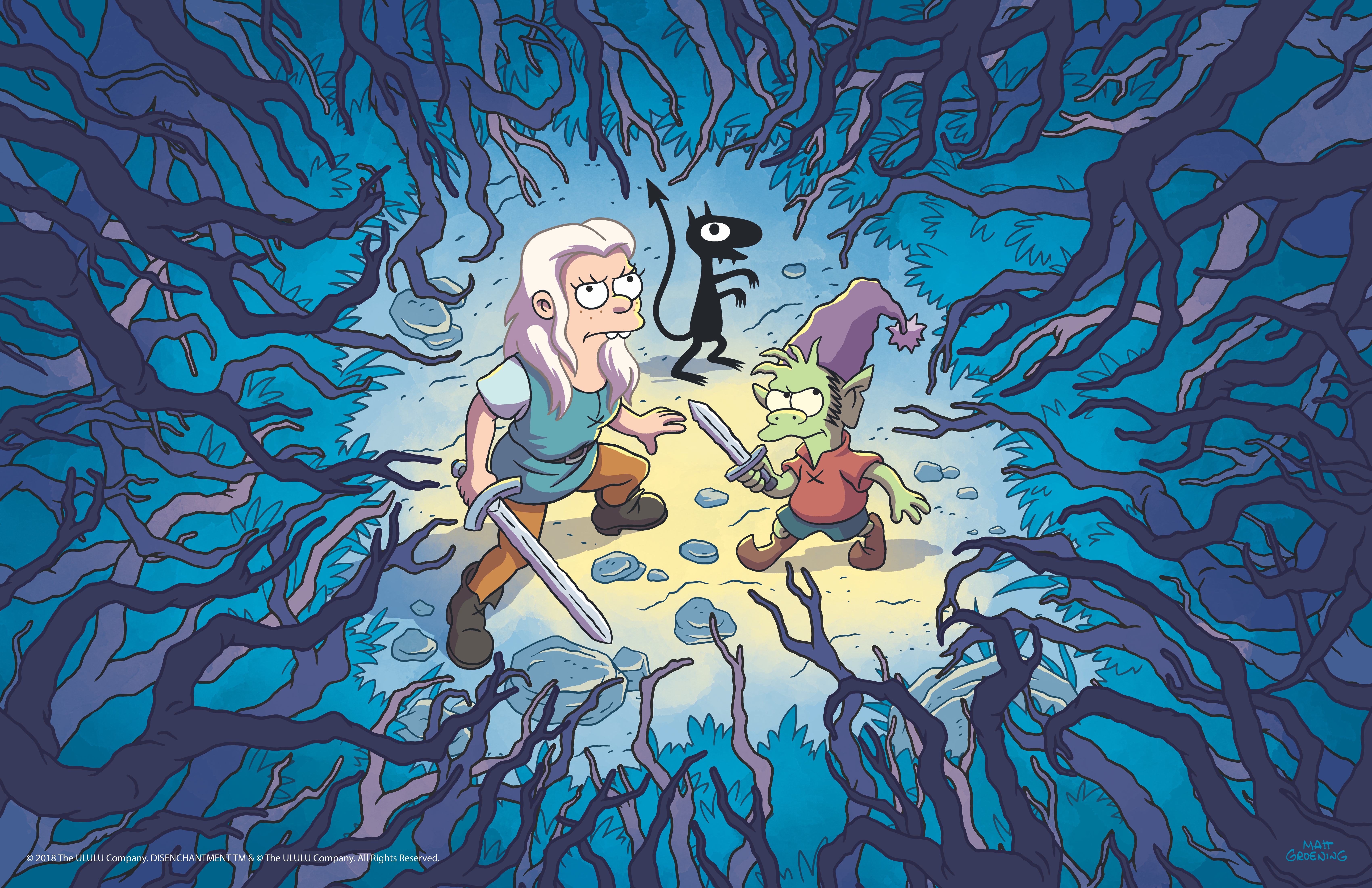 In many ways, the series is Groening’s most ambitious to date, trading in the streets of Springfield and pneumatic tubes of New New York for a fantasy world somewhere between Westeros and Middle Earth. It’s a genre he says he’s been looking to tackle for decades, but had never found the right outlet. And while the new series exists in a world familiar to fantasy fans, it rarely butts up against direct parody of beloved properties.

“I’ve been thinking about fantasy for a long time,” Groening says. “Some of my favorite forms of entertainment are fantasy, starting with Fractured Fairy Tales on the old Rocky and Bullwinkle show, to Monty Python and the Holy Grail to the original Wizard of Oz film and novels by Terry Pratchett and Gene Wolfe.”

Disenchantment is a tricky cocktail to get just right — a fairy tale adventure mixture, spiked with solid punch lines. “I try to incorporate all of that as inspiration and then try not to do straight parody,” says Groening. “The problem with comedy is that just getting the genre is very easy and only goes a little ways. So, what we do is try to get people on board with the fantasy characters and make them as emotional real as possible.”

An embarrassment of talent should help. The series is helmed by Groening and former Simpsons show runner, Josh Weinstein. Broad City star Abbi Jacobson takes the lead as Bean, a drinking/gambling/cursing princess with a fittingly rebellious streak. Comedians Eric Andre and Nat Faxon fill out the primary leads as a “personal demon” named Luci and elf with the decided uninspired name, Elfo, respectively.

The rest of the cast is rounded out by a stack of British comedians from series like The Mighty Boosh and Toast of London, along with mainstay voice actors from his previous series. Groening and Weinstein also poached liberally from the shows to stock the writers’ room.

“We have a writing staff that’s a combination of old guys from Futurama and The Simpsons and some younger writers who definitely have a different point of view,” says Groening. “They just don’t understand the appeal of old character actors from the 1930s and ’40s.” 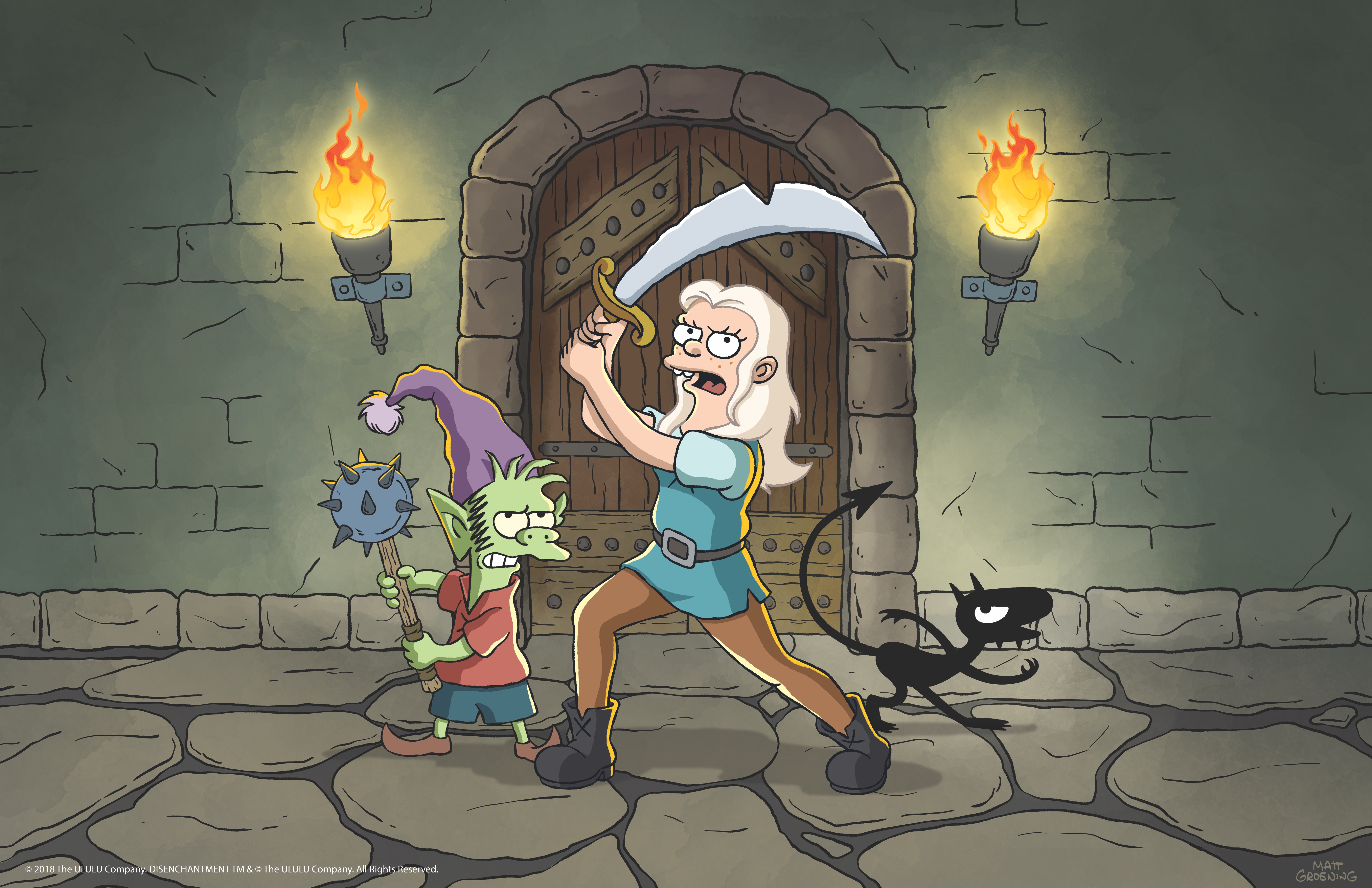 All of that is rounded out by music from Devo mastermind Mark Mothersbaugh, whom Groening refers to fondly as “a Balkan-ska-klezmer combination that you’ve never heard before in a fantasy show.”

The real secret sauce, however, may be Netflix itself. Along with Amazon and Hulu, the platform has transformed the way television content is consumed, freeing Groening and the rest of the crew from television sitcom constraints that shaped his two previous series.

As Springfield Confidential, the new book from longtime Simpsons show runner Mike Reiss reveals, Groening has been interested in long-term character pay-off for some time. It was Groening who pushed for a series ending in which Marge is revealed to be a rabbit — an homage to Groening’s longtime weekly strip, Life in Hell.

Oh, and then there are his big plans to reveal that Krusty the Clown was actually Homer disguised as a way to connect to his son. That was ultimately a too-complicated subplot for the writers to tackle during the show’s early seasons.

“You take advantage of whatever the boundaries are and try to push them,” says Groening. “It’s one thing when it’s a 22-minute network sitcom that has commercial breaks every seven minutes. That makes you write in a certain way. If you’re on Netflix and have 10 episodes to tell your story, it changes everything. You can tell longer, bigger arcs, you don’t have to reset at the end of every episode. There’s a literal cliffhanger at the end of episode one.”

Disenchantment may never hit the full epic fantasy sweeps of Lord of the Rings or Game of Thrones, but it’s clear from the outset that the story has broader ambitions than most can achieve in a traditional half-hour comedy format. Without showing his hand, Groening lets on that “the very first thing you see is a giant clue that’s staring you in the face that reveals something about what you’re watching.” 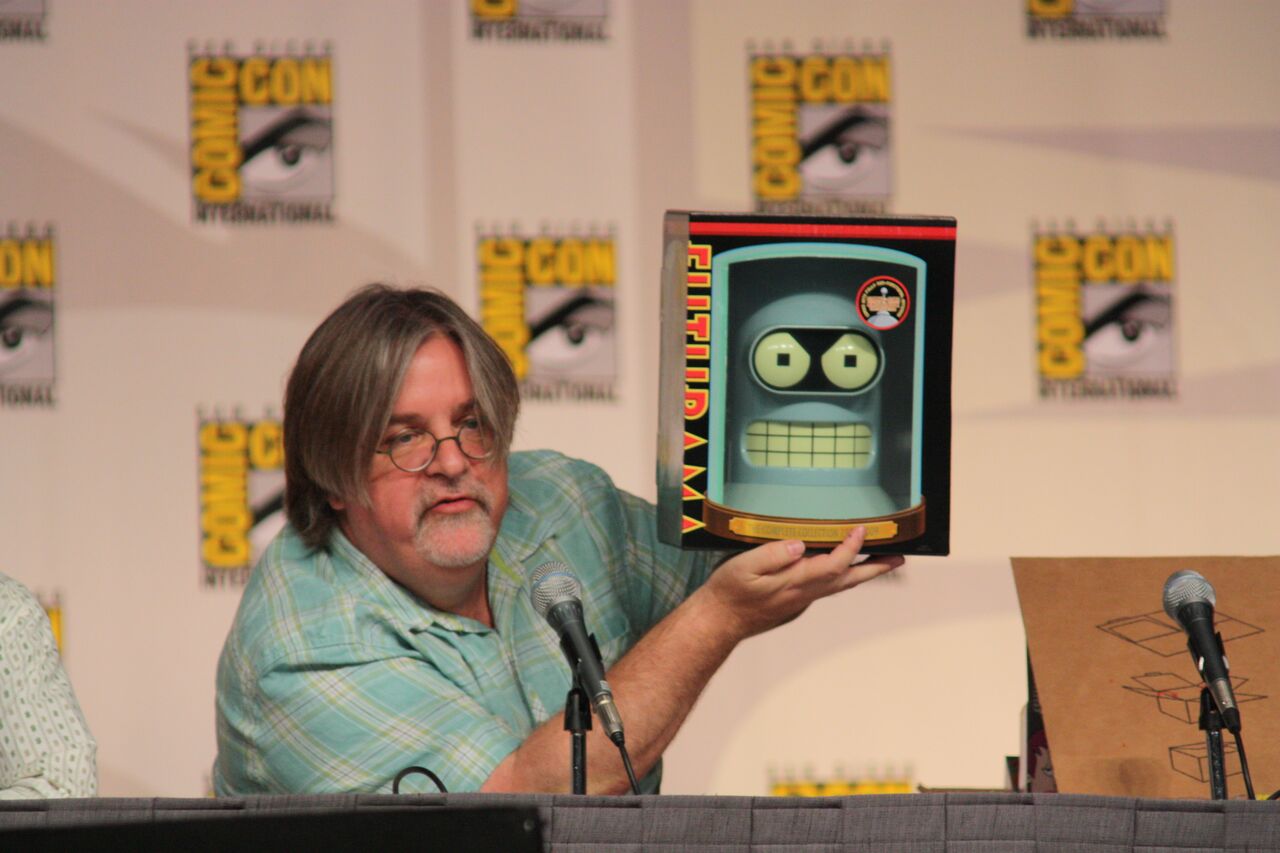 It’s not a particularly useful hint, so far as those things go, but the artist is clearly happy to prime the pump for enthusiastic fans to comb over the content of the first 10 episodes through repeat binges. If its predecessors are any indication, that sort of rapid fandom ought not be too difficult to stoke.

“We threw in a lot of secrets and clues and puzzles for the kind of obsessive fan I’ve come to know, specifically from Futurama and, of course, The Simpsons,” says Groening. “You try to reward those people for paying attention. That’s where the original idea for the freeze-frame jokes from The Simpsons came from. If you didn’t see it, it doesn’t matter, but if you’re the kind of person who would freeze the frame and actually read the joke, you’ll get something out of it. We’ve done that with Disenchantment. We think it works as a sleepy time, fun, epic fantasy you can watch as you drift off at night. Or, if you’re the kind of person who obsesses, there’s something for you there, too.”

More immediate gratification for Simpsons and Futurama fans can be found in Groening’s unmistakable character design. It’s a bit jarring at first, seeing those icons filtered through a medieval fantasy landscape, but ultimately the aesthetic provides a grounding for first-time viewers. It’s warm and comfortable, like an old coat, and likely to help fans stay invested as the story unfolds gradually over the course of these first 10 episodes.

The style has been Groening’s calling card since well before The Simpsons — prior even to Life in Hell, which finally drew to a close in 2012 after a 32-year run. 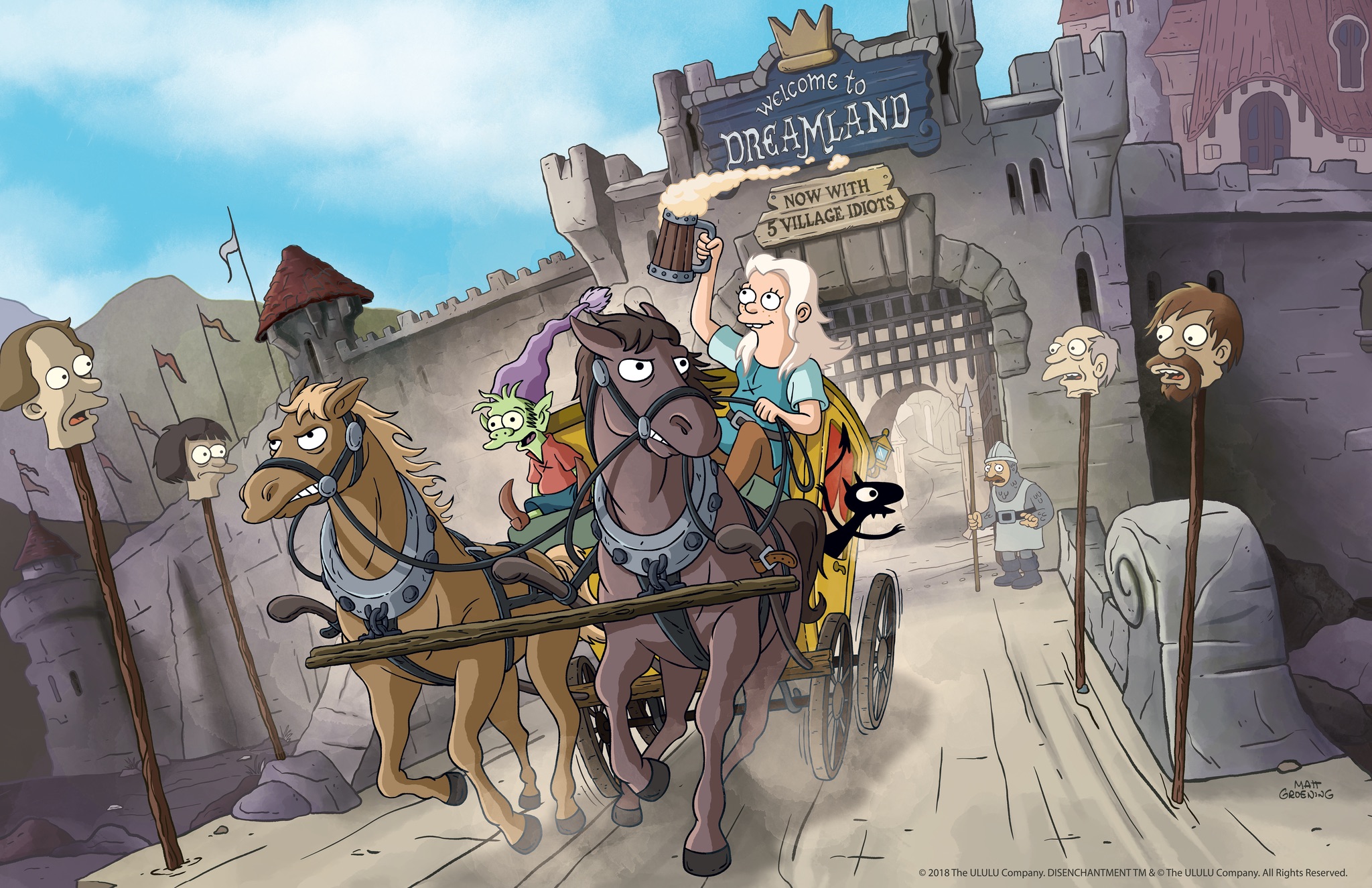 “What always amazed me is that this very simple style could be very expressive,” Groening explains. “With just a few curving lines and changing them slightly, you could come up with every expression that you wanted. I can’t do it, but I work with animators and designers who can take that style and make them attractive.”

That Elfo looks like a green Bart Simpson in a Smurf hat is the result of something more primordial in the cartoonist’s line work.

“I developed that style of the large bulgy eyes and ridiculous over-bite when I was 12 years old,” explains Groening. “Actually, Elfo is based on the very first character in that style that I drew. He was named Melvin. I used to draw a lot of comics with that guy, and basically gave him an elf hat and pointy ears.”