A look back at the past decade of consumer technology use in the UK has shone a light on changing gadget habits, underlining how Brits have gone from being smartphone dabblers back in 2008 when a top-of-the-range smartphone cost ~£500 to true addicts in today’s £1k+ premium smartphone era.

The report also highlights what seems to be, at times, a conflicted relationship between Brits and the Internet.

While nine in ten people in the UK have home access to the Internet, here in 2018, some web users report feeling being online is a time-sink or a constraint on their freedom.

But even more said they feel lost or bored without it.

Over the past decade the Internet looks to have consolidated its grip on the spacetime that boredom occupied for the less connected generations that came before.

The overview comes via regulator Ofcom’s 2018 Communications Market report. The full report commenting on key market developments in the country’s communications sector is a meaty, stat and chart-filled read.

The regulator has also produced a 30-slide interactive version this year.

Commenting on the report findings in a statement, Ian Macrae, Ofcom’s director of market intelligence, said: “Over the last decade, people’s lives have been transformed by the rise of the smartphone, together with better access to the Internet and new services. Whether it’s working flexibly, keeping up with current affairs or shopping online, we can do more on the move than ever before.

“But while people appreciate their smartphone as their constant companion, some are finding themselves feeling overloaded when online, or frustrated when they’re not.”

We’ve pulled out some highlights from the report below…

Social and emotional friction, plus the generation gap…

The impact of (multifaceted and increasingly powerful and capable) smartphones can also be seen on some other types of gadgets. Though TV screens continue to compel Brits (possibly because they feel it’s okay to keep using their smartphones while sitting in front of a bigger screen… )

What else are UK citizens getting up to online? More of a spread of stuff than ever, it would appear…

One more thing: Women in the UK are bigger Internet fans than men.

Perhaps contrary to some people’s expectations, women in the UK spend more time online on average than men across almost all age groups, with the sole exception being the over 55s (where the time difference is pretty marginal)… 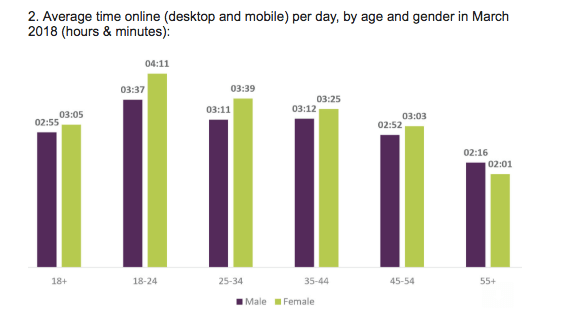