Starbucks is palling up with Alibaba as it seeks to rediscover growth for its business in China.

China has been a bright spot for some time for the U.S. coffee giant, but lately it has struggled to maintain growth — its China business dragged on its Q3 financials — and it is up against some ambitious new rivals, including billion-dollar startup Luckin Coffee.

One-year-old Luckin recently raised $200 million from investors and it has already built quite a presence. It claims over 500 outlets across China and it taps into the country’s mobile trends, with mobile payments and orders and delivery, too. Then there are some deep discounts aimed at getting new users, as is common with food, cars and other on-demand services.

In response, Starbucks is injecting some of that ‘New Retail’ strategy into its own China presence — and it is doing so with none other than Alibaba, the company that coined the phrase, which signifies a marriage between online and offline commerce.

The partnership between Alibaba and Starbucks is wide-ranging and it will cover delivery, a virtual store and collaboration on Alibaba’s “new retail” Hema stores.

The delivery piece is perhaps most obvious, and it’ll see Starbucks work with Ele.me, the $9.5 billion food delivery platform owned by Alibaba, to allow customers to order and receive coffee without visiting a store. The service will start in September in Beijing and Shanghai, with plans to expand to 30 cities and over 2,000 stores by the end of this year.

Starbucks is also building its app into Alibaba’s array of e-commerce sites, including its Tmall brand e-mall and Taobao marketplace. That’s a move that Starbucks President and CEO Kevin Johnson told CNBC would operate “similar to the mobile app embedded right into that experience” and open Starbucks up to Alibaba’s 500 million-plus users. 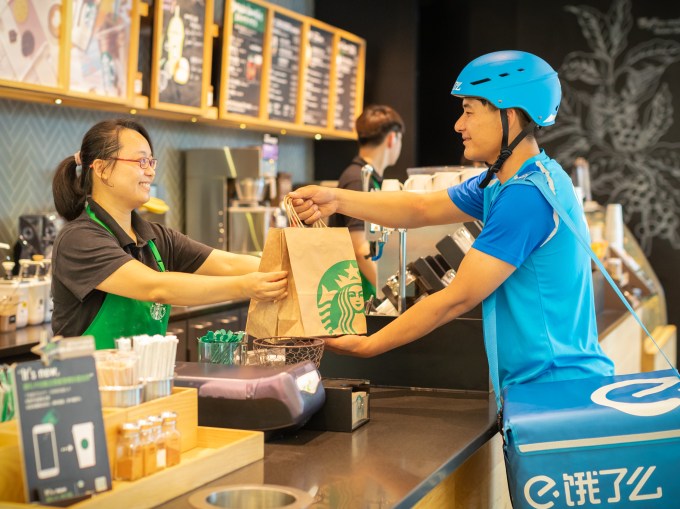 Finally, Starbucks is bringing its own “Starbucks Delivery Kitchens” to Alibaba’s Hema stores, which feature robots and mobile-based orders, that will combine Starbucks stores to boost its delivery capacity and speed.

Starbucks, as mentioned, needed a boost in China but the deal is also a major coup for Alibaba, which is battling JD.com on the new retail front as well as ambitious on-demand service Meituan. The latter is reported to have recently filed for an IPO in Hong Kong that could raise it $4 billion.