With the big cloud companies reporting recently, we can be sure of a couple of things: the market continues to expand rapidly and AWS is going to be hard to catch. Depending on whose numbers you look at, the market grew around 50 percent as it continues its unprecedented expansion.

Let’s start with market leader, Amazon Web Services. Canalys has them with 31 percent of the market while Synergy Research puts them at 34 percent. That’s close enough to be considered a dead heat. As Synergy’s John Dinsdale points out, AWS is so dominant that in spite of mega growth numbers from other vendors, it is still bigger than the next four competitors combined, even after all these years.

Those competitors, by the way, are no slouches by any means. They include Microsoft, Google, IBM and Alibaba, so some pretty elite enterprise players. As we’ve noted in past analyses, one of the primary issues for all the competitors is how late they were to the market. They gave Amazon a massive head start, and they show no signs of ceding that lead any time soon. 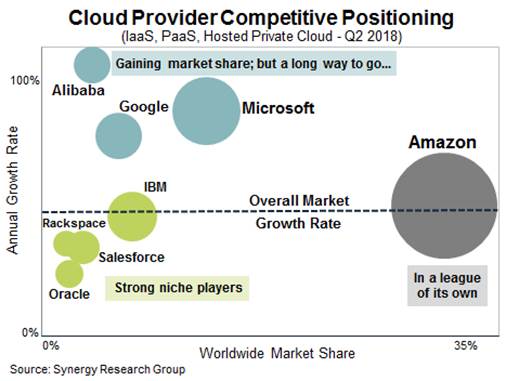 Of course, AWS isn’t standing still either, it grew 48 percent last quarter by Canalys’ estimate, while Synergy has AWS marketshare up a tick to 34 percent.

Interestingly, Synergy finds this overall competitor growth did not cut into Amazon’s marketshare at all, but was the result of continued growth in the marketplace, as companies continue to shift workloads to the cloud. “The rapid growth of Microsoft, Google and Alibaba sees them all increase their market shares too, but it is not at the expense of AWS,” Synergy’s John Dinsdale pointed out in a statement.

That is not to say that Microsoft and Google are not growing too. In fact, Canalys had Microsoft growing at an 89 percent clip last quarter while Google grew an amazing 108 percent. It’s always important to point out that it’s easier to grow from a small number to a bigger number than it is to grow from a big number to a bigger number. Yet AWS continues to defy that idea and grow anyway, although not quite at the rate of its competitors.

Synergy reports these marketshare percentages for the competitors: Microsoft 14 percent, IBM 8 percent, Google 6 percent and Alibaba 4 percent, while Canalys shows Microsoft with 18 percent and Google with 8 percent. It did not report on IBM or Alibaba. 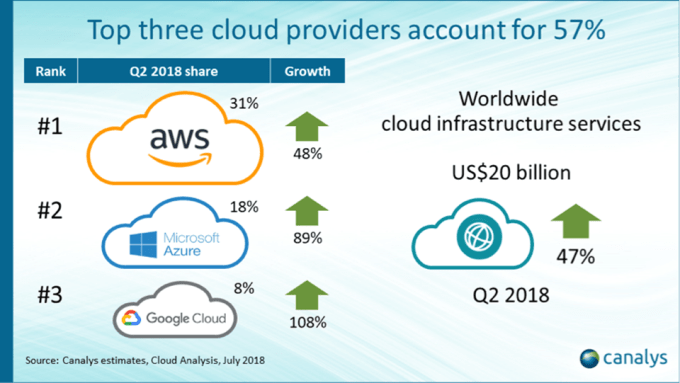 While these growth numbers have to drop at some point, they could continue to grow for the next several years as large companies get more comfortable with the cloud and move increasing percentages of their workloads.

Of course, even then it’s not a zero sum game. As we see increasing use of data-intensive workloads involving internet of things, blockchain and artificial intelligence, it’s entirely possible that the market will continue to grow even with fewer workloads moving from private data centers.

For now, even with their eye-popping growth numbers, the competition continues to chase AWS. Even as these companies find ways to differentiate themselves with different approaches, offerings and services, the market dynamics are hardening and catching AWS seems less and less likely.

It also seems increasingly less likely that some small upstart can come in and undermine the top players, as it just takes too much investment to keep up with them and their scale. “In a large and strategically vital market that is growing at exceptional rates, [the market leaders] are throwing the gauntlet down to their smaller competitors by continuing to invest enormous amounts in their data center infrastructure and operations. Their increased market share is clear evidence that their strategies are working,” Synergy’s Dinsdale said a statement.

What the competitors need to do now is continue to focus on customer requirements and what they can offer in terms of price and service to continue to take advantage of their own unique strengths. There’s plenty of room in this space for everyone to thrive, but some will thrive more than others. That’s just the nature of the market.