Facebook is hiding that users are leaving its main app but sticking with Instagram and WhatsApp by publicizing a new metric. Facebook today for the first time announced that in June, 2.5 billion people used at least one of its apps: Facebook, Instagram, WhatsApp or Messenger. That’s a helpful number, because it counts real people, rather than accounts, since people can have multiple accounts on a single app. Two and a half billion people compares to 2.23 billion monthly users on Facebook, 1 billion users on Instagram, 1.5 billion users on WhatsApp and 1.3 billion users on Messenger.

Mark Zuckerberg announced the new stat on Facebook’s Q2 2018 earnings call following a tough report that saw its user growth slow to its lowest rate ever. Zuckerberg said the 2.5 billion counts “Individual people rather than active accounts,” which he says “excludes when people have multiple accounts on a single app. And it reflects that many people use more than one of our services.” 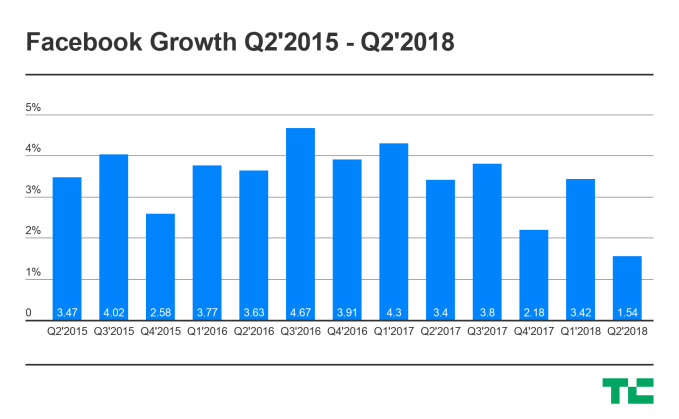 It seems as if Facebook announced the stat in hopes of deflecting attention from the fact that its user count shrank in Europe and was flat in the U.S. and Canada, contributing to extraordinarily low monthly and daily user growth. That growth trouble in turn sent Facebook’s share price down more than 20 percent in after-hours trading.

On the 2.5 billion stat, Facebook CFO David Wehner explained that “We believe this number better reflects the size of our community.” He also clarified that Facebook’s monthly active user count of 2.23 billion “does count multiple accounts for a single user, and that accounts for 10 percent of Facebook’s MAU,” or 223 million.

By bundling the user counts into a “family of apps audience metric,” Facebook can obscure the fact that its core app is hitting a wall. Instead, it can rely on WhatsApp and Instagram to shore up the number. For example, if teens slip from Facebook to Instagram, they’ll still be counted in the new metric. But that doesn’t change the fact that the company’s main money-maker is losing its edge.