InkHunter, an augmented reality tattoo try-on app that was born out of a 48-hour hackathon back in the altogether gentler days of 2014, has bagged a place in Y Combinator’s summer 2018 batch, scoring itself the seed accelerator’s standard $120,000 deal in exchange for 7 percent equity.

We first covered InkHunter in April 2016 when it had just launched an MVP on iOS and was toying with building a marketplace for tattoo artists. Several months and 2.5 million downloads later, InkHunter launched its Android app, having spent summer 2016 going through the ERA accelerator program in New York.

At that time the team was considering a B2B business model pivot, based on licensing their core AR tech to e-commerce apps and other developers. Though they wanted to keep the tattoo try-on app ticking over as a showcase.

Fast-forward two years and it’s the SDK idea on ice after InkHunter’s app gained enough traction in the tattoo community for the team to revive their marketplace idea — having passed eight million users — so they’ve relocated to Mountain View and swung back around to the original concept of a try-before-you buy tattoo app, using AR to drive bookings for local tattoo artists.

“We are focusing on iterating from ‘try’ to ‘try and buy’ experience, based on feedback we got from our users. And this is our goal for the YC program, which places a lot of focus on growth and user interactions,” CTO Pavlo Razumovskyi tells us.

“Last time we have talked, we did not expect such adoption on the tattoo market. But when we saw really strong usage and feedback from the tattoo community, we decided to double down on that audience.”

The newly added booking option is very much an MVP at this stage — with InkHunter using a Typeform interface to ask users who tap through with a booking request to input their details to be contacted later, via text message, with information about relevant local tattoo artists (starting with the U.S. market).

But the team’s hope for the YC program is help to hone their approach. 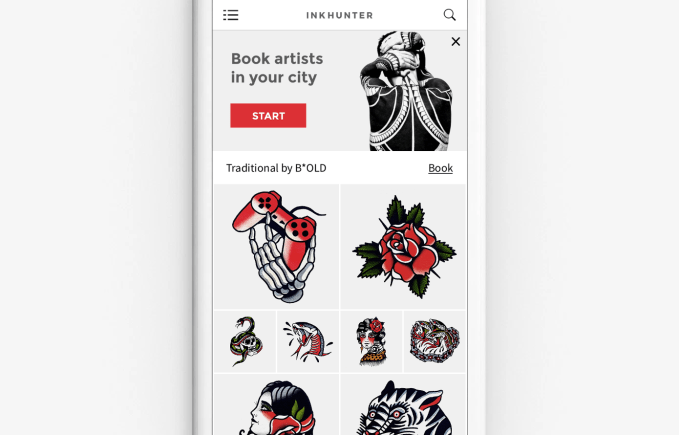 Razumovskyi confirms they’ve started with a booking request concierge service in the U.S. without onboarding any tattoo artists into the planned marketplace as yet, and are merely hand-picking local tattoo artists to help users with bookings.

“While this approach doesn’t scale, it helps us to figure out problems and quickly iterate solutions,” he adds. “We are almost done with this stage, and close to launch an in-app search for tattoo artist into selected locations, listing only licensed artists with the large portfolio.”

InkHunter says close to half (45 percent) its users have expressed a desire to get a tattoo within the next few months, while it got more than 500 booking requests in the first week of the concierge feature.

Though you do have to wonder whether users’ desire to experiment with ink on their skin will also extend to a desire to experiment with different tattoo artists too — or whether many regular inkers might not prefer to stick with a tattooist they already know and trust, and whose style they like. (A scenario which may not require an app to sit in the middle to take repeat bookings.)

“We want to help them do this with as little regret as possible,” says CEO Oleksandra Rohachova of InkHunter’s tattoo-hungry users — so presumably the team will also be carefully vetting the tattoo artists they list on their marketplace.

The main function of the app lets users browse thousands of tattoo designs and virtually try them on using its core AR feature — which requires people spill a little real-world ink to anchor the virtual design by making a few pen marks on their skin where they want the tattoo to live. As use-cases for AR go it’s a pretty pleasing one.

The team’s hope for the next stage of building an app business is once an InkHunter user has settled on the design and placement of their next tat, they’ll get comfortable about relying on the app to find and book an artist. And the next time, for their next tattoo too.