Roku is getting into the speaker business with today’s announcement of Roku TV Wireless Speakers.

Mark Ely, the company’s vice president of product management, said Roku is trying to address a growing consumer problem — the fact that as TVs get thinner, you end up buying “this beautiful TV, but it sounds bad.” To address this, you may end up purchasing a soundbar or creating a more elaborate home theater setup, but Ely argued that many consumers find this process confusing and intimidating.

So as the name suggests, Roku has created wireless speakers specifically for Roku TVs, the company’s lineup of partner-built smart TVs. Ely described them as speakers that deliver “really premium sound in a really compact package,” and at an affordable price. (They’re about seven inches tall and weigh four pounds each, he said.)

Roku says it should be easy to pair these speakers wirelessly with a Roku TV using Roku Connect, and since the company controls both the video and audio experience, it can ensure that they’re sync’d up perfectly, without lag. To minimize those moments when you’re frantically reaching for the remote to adjust the volume, the speakers also come with Automatic Volume Leveling to lower the sound in particularly loud scenes and boost the sounds when it gets too quiet.

Ely said the product takes advantage of Roku’s acquisition last year of Danish audio startup Dynastrom: “The goal has been to have audio be a real center of excellence for the company.”

“Our fundamental belief here is that by delivering a better sound experience, you get a better entertainment streaming experience,” he added.

The speakers will also come with a new remote called the Roku Touch, which is designed to emphasize voice controls without fully giving up the benefits of a regular remote — you can press-and-hold to deliver voice commands, but it still has buttons for playback control and others that you can preset.

Smart speakers from big tech companies like Apple and Amazon are seen as one main ways to get into the voice-powered home assistant market. Roku has its own voice assistant (which it’s making available to manufacturing partners), but Ely and Director of Consumer PR Seana Norvell said it’s really focused on understanding your entertainment needs — rather than, say, telling you the weather or helping you order products online. 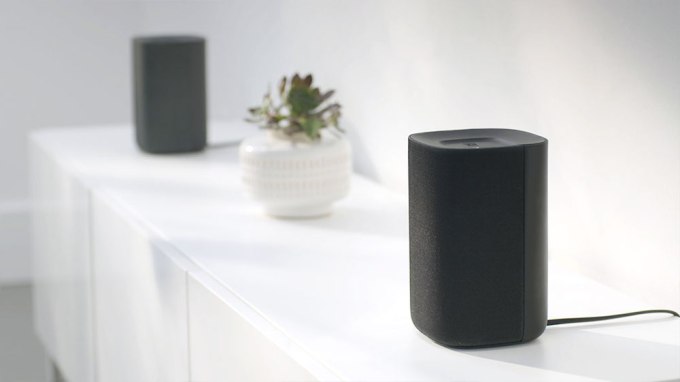 Ely said the company is only selling the speakers from the Roku website, at least initially, because that allows it to “market directly to Roku TV customers” while ensuring that other Roku customers (namely, those who have a Roku streaming device but not a Roku TV) don’t end up buying these speakers, which won’t work for them.