Eatigo, a Southeast Asia-based dining service that describes itself as an ‘anti-Groupon’ for restaurants, had a busy 2017 that saw it expand into a number of markets including India. Now it is primed to continue that growth further still after it gobbled down a fresh serving of capital from TripAdvisor, the travel giant that it already counts as an investor.

The funding is undisclosed but Eatigo CEO and co-founder Michael Cluzel told TechCrunch it is ‘eight-digits.’ We do know that it takes Eatigo to over $25 million raised to date which, given that the startup had raised more than $15 million following the completion of its previous round, suggests that the amount is around the $10 million mark.

Eatigo was founded in Bangkok in 2013 and it is designed to help restaurants fill unused inventory by offering deals to customers at certain times of the day. The appeal to eaters is deals, but unlike group buying services such as Groupon, Eatigo encourages restaurants to manage their inventory and time so that they are filling their quiet hours for additional revenue not ramming people into restaurants for the sake of it. The latter scenario, of course, puts pressure on staff, reduces service quality and is generally not conducive to a good dining experience. It is also questionable whether discounts drive long-time loyalty, a cornerstone the Groupon of old was built on, but I digress.

The Eatigo service is present in six countries where it claims four million registered users and over 4,000 restaurants. That latter number ranges from high-end affairs, such as upscale hotel restaurants, to chain outlets and — my own personal favorite — street food outlets. 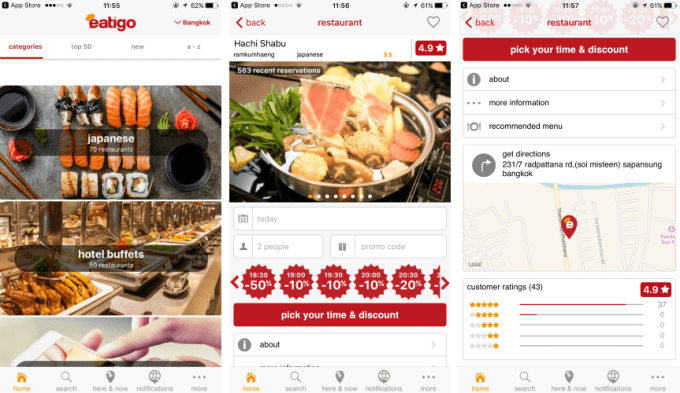 The important part here, besides the money, is that this new deal appears to signal a closer relationship between Eatigo and TripAdvisor, and particularly TripAdvisor’s The Fork subsidiary and its TripAdvisor Restaurants service.

The Fork, which the company got via a 2014 acquisition, is TripAdvisor’s expansion into food, allowing users to find information on availability and bookings on restaurants and in cities. Like Eatigo, it allows for advanced bookings at a discount but the service is squarely focused on Europe, having initially been founded in France. In that respect, it makes sense for the duo to collaborate.

“As we look to further our presence in the Asia Pacific region, we believe our latest strategic investment in Eatigo will continue to support a great business and strong management team. TripAdvisor’s continued partnership with Eatigo will help us both better serve millions of diners and restaurant owners who are increasingly turning to online channels,” said Bertrand Jelensperger, whos is senior VP of TripAdvisor Restaurants and the founder of TheFork, in a statement.

Cluzel, the Eatigo CEO, told TechCrunch that his company is looking to expand in Southeast Asia and the wider Asian market but, on the product side, it is preparing a new service that will “move beyond our original scope of doing just time-based discounts.”

What exactly that is — and how/whether it is tied to TripAdvisor or The Fork — he wouldn’t say at this point.