Seniors over 65 are one of the fastest-growing age groups in the United States, but they are still an underserved market. Many don’t need assisted living or in-home care, but they do need help with transportation and errands. Most of all, however, the elderly want companionship. Papa, a service that bills itself as “grandkids on-demand,” wants to fill the gap by connecting college students, called Papa Pals, with seniors.

Named in honor of founder and chief executive officer Andrew Parker’s grandfather, the Miami-headquartered startup is currently participating in Y Combinator’s accelerator program. Seniors can use Papa’s app (or a customer service line for those who don’t own a mobile device) to book a Papa Pal. Papa Pals might take seniors to the grocery store or doctor’s appointments, help with chores or teach them how to set up a new smartphone or tablet. They also provide company for seniors, many of whose own adult children or grandchildren are busy working or live far away. Papa is currently available in Florida and will began expanding into other states next year.

“What’s interesting is that people don’t always want to say they want companionship, even though their families say they do,” says Parker. “But when a visit ends up being six hours, that’s evident what it’s for.”

Before launching Papa, Parker was vice president of health systems at telehealth company MDLIVE. He lived near his grandfather, who had early onset dementia, and would often go over to help him with errands. One day, however, Parker was unable to go on a grocery run. Since his workload was increasing, Parker posted on Facebook for a helper. A woman named Andrea responded and after his family interviewed her and did a background check, she began assisting his grandfather regularly.

The experience made Parker realize there was a gap in the market for seniors who, like his grandfather, were mostly independent and don’t require a caregiver, but still needed occasional help from a trustworthy person. He decided to leave MDLIVE and began working on Papa to provide what he describes as “pre-care.” 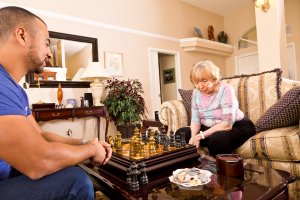 Papa Pals are college students, many of whom are studying nursing, social work or hospitality. Before they are matched with seniors, Papa Pals undergo a background check and a motor vehicle records check and inspection. The company also asks them to complete a personality test. Parker describes the ideal Papa Pal as not only interested in working with seniors for career experience, but also outgoing, empathetic and patient.

“If you want to be a Papa Pal to make a couple extra dollars, then it’s probably not a good fit,” he says.

One of the most requested services is transportation. Many seniors need more than an Uber. They also want someone to help them shop and unload bags or sit with them in a doctor’s waiting room. Papa Pals also help with technology, like teaching seniors how to set up Netflix or video chat with their grandkids. The service starts at $15 an hour and a premium membership option allows seniors to interview Papa Pals, pick a team of helpers and request same-day appointments.

Parker says Papa has plans to expand into at least five states next year. The startup also wants to build an ecosystem of senior services, so when customers start to need more intensive services like in-home care, Papa can refer them to its partners.

While there are apps like Honor that help seniors find in-home caregivers, Papa’s on-demand service is unique. Parker says one of the things that will help it maintain an advantage against any future startup competitors is its backend, which enables it to match seniors with available Papa Pals quickly, whether they use its app or phone number. Papa Pals see an in-app dashboard that lets them accept appointments, then provides them with requests made by seniors or their families. The system also manages traffic and logistics and algorithmically calculates compensation for Papa Pals (on average, Parker says they make $20 to $30 per visit, which typically last about three hours).

Papa is currently gearing up for the introduction of new Medicare Advantage supplemental benefits that will cover some of the services it offers, like transportation to medical appointments. The ruling will go into effect next year and Papa has begun initial discussions with providers of Medicare Advantage, which has about 20 million beneficiaries.

Papa is also expanding its business-to-business model by working with partners, including senior living facilities, to offer Papa Pal services to their residents.

“Papa’s mission for the long run is to support seniors and their families,” Parker says. “We see ourselves at the beginning of the process.”