Here’s a tale of two organizations. When it comes to banking, I can walk up to an ATM anywhere in the world, slide in a card, hit a couple of buttons, and walk away with cash, often in less than 20-30 seconds. It’s magical, but so quotidian that we easily forget the vast technical infrastructure that powers this experience.

Now, try to walk into a government agency to get service done. You often need to get a ticket and wait, often for an hour or more. During a recent trip to the New York Department of Motor Vehicles, I ended up getting sent to four different lines, all of which were independent, and because of a computer malfunction, the whole place was being run by people pointing and shouting.

The dichotomy between those two experiences is, fundamentally, a difference in procurement.

Before you run to get coffee (or whiskey, for that matter), let me say this: procurement is the sort of extremely boring but absolutely vital task that is both the barrier but also the opportunity for making the DMV and other government services more like the ATM. New initiatives around the world are trying to rebuild procurement from the ground up, with entrepreneurship at their core. One initiative I’ve spent time with recently is CivTech, based in Scotland.

CivTech, a component of the digital directorate of the Scottish government, is a sort of two-sided marketplace connecting startup founders with government agencies. Agencies sponsor challenges, and startups compete to be the best at solving that challenge, potentially winning hundreds of thousands of dollars and a reference customer. Those startups are organized into batches, with the program launching its third batch shortly (applications are due July 2nd).

Alexander Holt, head of CivTech, is an energetic true believer that startup innovation can transform government services. For him, the key question for public agencies is “how do you procure what you don’t know exists?”

In the classical model of procurement, an agency drafts a Request for Proposals (RFP) that spells out exactly what the agency is looking for from vendors. Then, whoever bids lowest on the RFP will usually get the contract. The disconnect is that agencies rarely know what solutions they need, and Holt says that often leads to disaster. “We are writing specs that we don’t understand, and we are looking at the solution, not looking at the problem,” he said.

Holt wants to completely change that process. Instead of presenting a solution and asking for implementations, he wants agencies to present problems and keep an “open mind” about what a solution might look like. His message to agencies is “don’t give us a solution you think you need, but give us a problem you think you have.”

Then — and this is a major difference from traditional procurement — he encourages agencies to select several teams (usually three) to build pilot projects that could solve the problem. The idea is to get a better sense of what solutions exist, and also learn how the companies function. “You get an understanding of their capacity and more importantly, their culture, and that is really important,” Holt explained.

After a few weeks of building, the agency can choose to work with one company, and help them launch their product. The model is fast, since startups are iterating rapidly in competition with each other, but also cheap. As Holt said, “The other benefit for the challenge sponsor is that the amount of time that the companies are putting in versus what you’re paying them is 10 times cheaper,” than conventional procurement models. 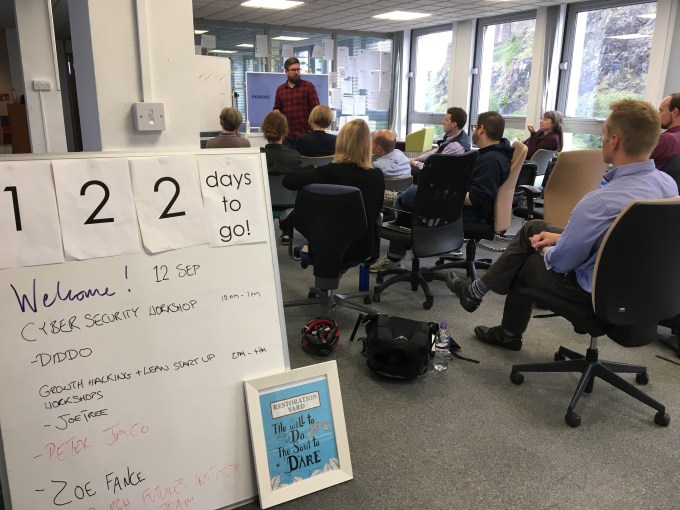 CivTech wants to educate the next generation of civic entrepreneurs

For startups participating in the program, CivTech hopes it can provide them with legitimacy and a first customer for their business. By the end of the program, “you have a first reference client, which is the government, that allows you to keep your equity 100% and your IP 100%,” Holt said. Plus, the program connects its startups to citizens to accelerate the innovation feedback loop.

While the team has a bold vision, the program had humble beginnings. The first cohort launched in June 2016 within days of Brexit, which radically redefined the future of the United Kingdom and Scotland along with it. The program also faced its own procurement challenge around finding a home, eventually signing a lease for its first batch less than an hour before launch.

The program has grown rapidly since its inception. It had just 6 challenges during its first batch, but this time around has 10 challenges from a diverse set of agencies, including Scotland’s health service and illicit trade agencies.

Transforming procurement and therefore government won’t happen overnight, but a change in mentality is the key to imprinting entrepreneurship and startup culture on bureaucrats. Holt said that his message is always consistent: “show me the law, not the rule.” Laws are much more flexible than we think, and changing procurement doesn’t start in the legislature, but in the acquisition office of every public agency.