Facebook is starting to let Group admins charge $4.99 to $29.99 per month for access to special sub-Groups full of exclusive posts. A hand-picked array of parenting, cooking and “organize my home” Groups will be the first to get the chance to spawn a subscription Group open to their members.

During the test, Facebook won’t be taking a cut, but because the feature bills through iOS and Android, those operating systems get their 30 percent cut of a user’s first year of subscription and 15 percent after that. But if Facebook eventually did ask for a revenue share, it could finally start to monetize the Groups feature that’s grown to more than 1 billion users. 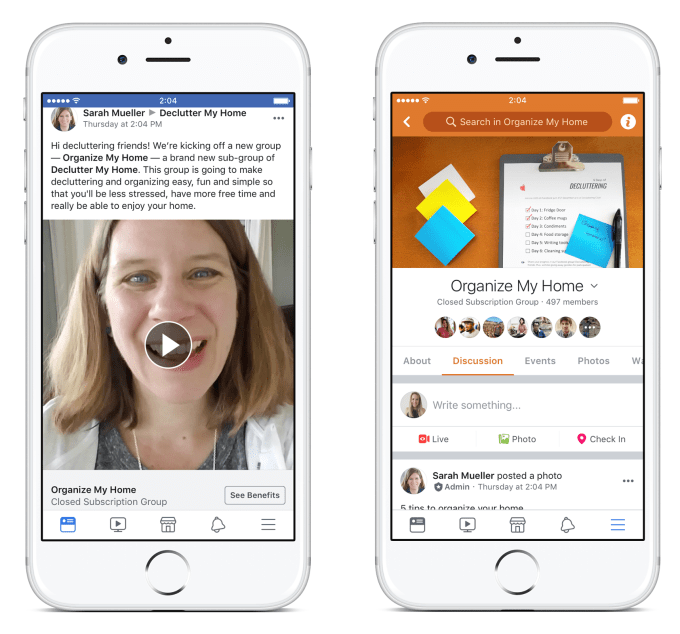 The idea for subscription Groups originally came from the admins. “It’s not so much about making money as it is investing in their community,” says Facebook Groups product manager Alex Deve. “The fact that there will be funds coming out of the activity helps them create higher-quality content.” Some admins tell Facebook they actually want to funnel subscription dues back into activities their Group does together offline.

Content users might get in the exclusive version of groups includes video tutorials, lists of tips and support directly from admins themselves. For example, Sarah Mueller’s Declutter My Home Group is launching a $14.99 per month Organize My Home subscription Group that will teach members how to stay tidy with checklists and video guides. The Grown and Flown Parents group is spawning a College Admissions and Affordability subscription group with access to college counselors for $29.99. Cooking On A Budget: Recipes & Meal Planning will launch a $9.99 Meal Planning Central Premium subscription group with weekly meal plans, shopping lists for different grocery stores and more.

But the point of the test is actually to figure out what admins would post and whether members find it valuable. “They have their own ideas. We want to see how that is going to evolve,” says Deve. 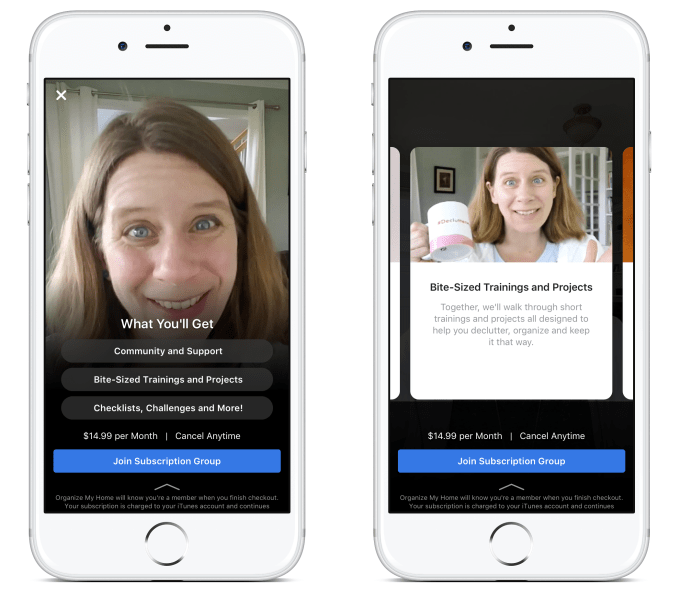 Here’s how subscription Groups work. First, a user must be in a larger group where the admin has access to the subscription options and posts an invitation for members to check it out. They’ll see preview cards outlining what exclusive content they’ll get access to and how much it costs. If they want to join, and they’re already an approved member of larger free group, they’re charged the monthly fee right away.

They’ll be billed on that date each month, and if they cancel, they’ll still have access until the end of their billing cycle. That prevents anyone from joining a group and scraping all the content without paying the full price. The whole system is a bit similar to subscription patronage platform Patreon, but with a Group and its admin at the center instead of some star creator.

Back in 2016, Facebook briefly tested showing ads in Groups, but now says that was never rolled out. However, the company says that admins want other ways beyond subscriptions to build revenue from Groups and it’s considering the possibilities. Facebook didn’t have any more to share on this, but perhaps one day it will offer a revenue split from ads shown within groups.

Between subscriptions, ad revenue shares, tipping, sponsored content and product placement — all of which Facebook is testing — creators are suddenly flush with monetization options. While we spent the last few decades of the consumer internet scarfing up free content, creativity can’t be a labor of love forever. Letting creators earn money could help them turn their passion into their profession and dedicate more time to making things people love.