The founders of entrepreneurial community Startup Grind have a startup of their own — Bevy, which announced today that it has raised $6.4 million in Series A funding.

CEO Derek Andersen (who founded and runs both Bevy and Startup Grind with CTO Joel Fernandes) said that the product was created to deal with Startup Grind’s challenges as the team tried to organize events using a mix of Eventbrite, Meetup and MailChimp,

“It worked fine at first, but a few years later, we looked up and we had hundreds of cities, and we had maybe 500 people that were working on it, and it was too much,” Andersen said. “For the first time in many years, we started to get smaller instead of bigger. We were spending all of this time just running triage and maintenance on the platform.”

So in early 2016, the team built its own event management software, with what Andersen said was “no intention of anyone else using it.” But eventually, he realized that other companies were facing similar problems, so he launched Bevy as a separate startup to further develop and commercialize the product.

“We really focus on the smaller, community events,” Andersen added. “If you just do a conference, Eventbrite is great — I’ve hosted thousands of events on Eventbrite. But if you want to host five or 10 events a month or jack that number up anywhere above that, and you don’t want to hire 10 people, then that’s really what we’re perfect to do.” 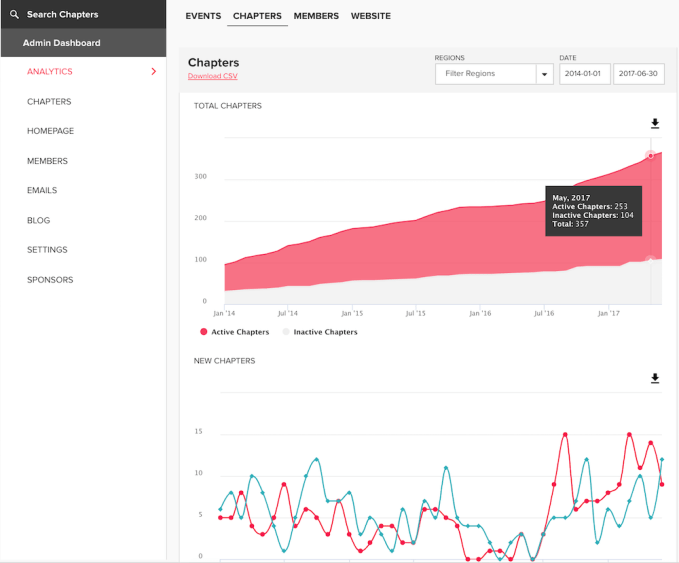 Usually, these are events where community members play a big role, or are even doing most of the organizing themselves. So beyond supporting tasks like creating event listings, sending out promotional emails and managing sponsorships, Andersen said one of Bevy’s big differentiators is the ability to precisely control which users are authorized to perform different roles at different events.

In addition, Andersen said that with Bevy, companies can create fully branded experiences and get full access to the customer data around their events. Customers include Atlassian, Duolingo, Docker, Evernote and Asana.

Andersen also suggested that the company is taking advantage of a broader shift in marketing, where companies are relying more on their own customers and communities.

“All the best companies do it today,” he said. He predicted that in the future, “Every company will have a customer-to-customer marketing strategy. Now we’ve made it affordable and turnkey.”