Weeks after French President Emmanuel Macron unveiled a $76 million African startup fund at VivaTech 2018, TechCrunch paid a visit to the French Development Agency (AFD) — who will administer the new fund — to get more details on how le noveau fonds will work.

The $76 million (or €65 million) will divvy up into three parts, according to AFD Digital Task Team Leader Christine Ha.

“There are €10 million [$11.7 million] for technical assistance to support the African ecosystem… €5 million will be available as interest-free loans to high-potential, pre-seed startups…and…€50 million [$58 million] will be for equity-based investments in series A to C startups,” explained Ha during a meeting in Paris. 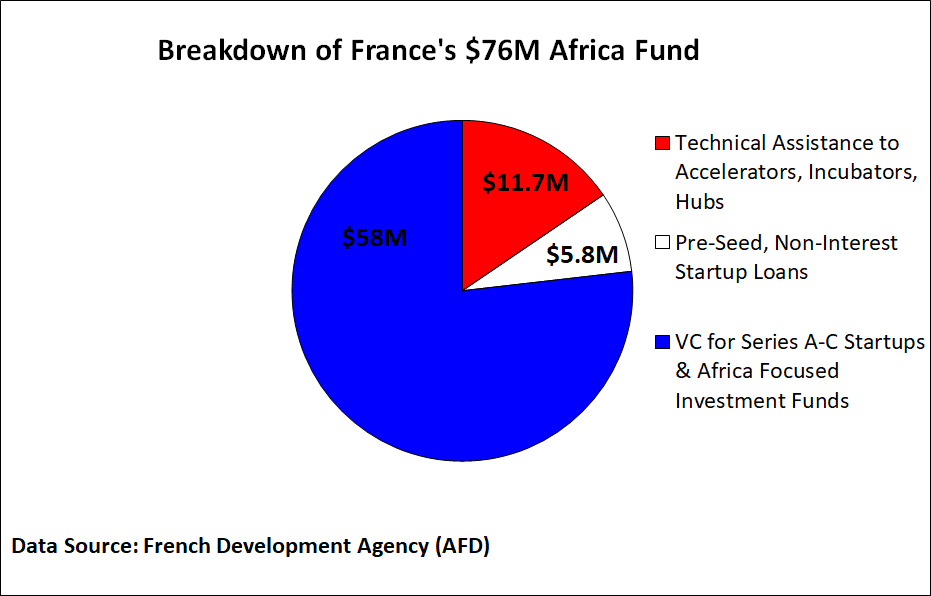 The technical assistance will distribute in the form of grants to accelerators, hubs, incubators and coding programs. The pre-seed startup loans will issue in amounts up to $100,000 “as early, early funding to allow entrepreneurs to prototype, launch and experiment,” said Ha.

The $58 million in VC startup funding will be administered through Proparco, a development finance institution — or DFI — partially owned by the AFD. The money will come “from Proparco’s balance sheet”…and a portion “will be invested in VC funds active on the continent,” said Ha.

Proparco already invests in Africa-focused funds such as TLcom Capital and Partech Ventures. “Proparco will take equity stakes, and will be a limited partner when investing in VC funds,” said Ha.

Startups from all African countries can apply for a piece of the $58 million by contacting any of Proparco’s Africa offices (including in Casablanca, Abidjan, Douala, Lagos, Nairobi and Johannesburg).

And what will AFD (and Proparco) look for in African startup candidates? “We are targeting young and innovative companies able to solve problems in terms of job creation, access to financial services, energy, health, education and affordable goods and services…[and] able to scale up their venture on the continent,” said Ha.

Digital Africa ­— a broader French government initiative to support the African tech ecosystem — will launch a new online platform in November 2018 with resources for startup entrepreneurs.

So that’s the skinny on France’s new Africa fund. It adds to a load of VC announced for the continent in less than 15 months, including $70 for Partech Ventures, TPG Growth’s $2 billion Rise Fund and $40 million at TLcom Capital.

Though $75 million (and these other amounts) may pale compared to Silicon Valley VC values, it’s a lot for a startup scene that — at rough estimate — attracted only $400 million four years ago.  African tech entrepreneurs, you now have a lot more global funding options, including from France.