Media businesses are in the dumper. Every week, we hear of new layoffs, budget cuts, diminished editorial quality and more, way more. And yet, somehow, miraculously, more than 3,000 journalists managed to find the funds to travel to Singapore to cover the Kim-Trump Summit Extraordinaire this week.

How many journalists got to see the summit activity? From Politico: “Most notably, the number of American journalists allowed to witness the meeting between Trump and Kim was limited to seven — a smaller group than would usually be present for such a summit, and one that excluded representatives from the major wire services” (emphasis added).

It’s a huge news story, a major historical moment in the relations between the DPRK and the United States and one that portends massive changes in that relationship going forward. The event should be fervently covered by the global press. Yet, 3,000 seems a stupendous number of people to cover an event so scripted and managed. Journalists watched from a warehouse and even got so bored, they started interviewing each other rather than, I don’t know, a source.

I notice this same dynamic watching the keynote videos of any of the top tech companies — there are hundreds if not thousands of journalists covering these events from the audience. Exactly how you build a unique story sitting there beats me.

In media, one of the most critical qualities of a great story is salience — how important a story is to a particular audience. Tech readers want to know everything happening at an Apple keynote, just as much as the whole world is curious about what shakes down in Singapore. It makes sense to have a density of journalists to cover these events.

The problem in my mind is the sheer duplication of work, when the increasingly precious time of journalists could be spent on finding more differentiated or unique stories that are under-reported. In Singapore, how many English-language journalists needed to be there? How many Chinese-speaking or Korean-speaking journalists? I’m not suggesting the answer in aggregate is one each, but certainly the number should be fractions of 3,000. 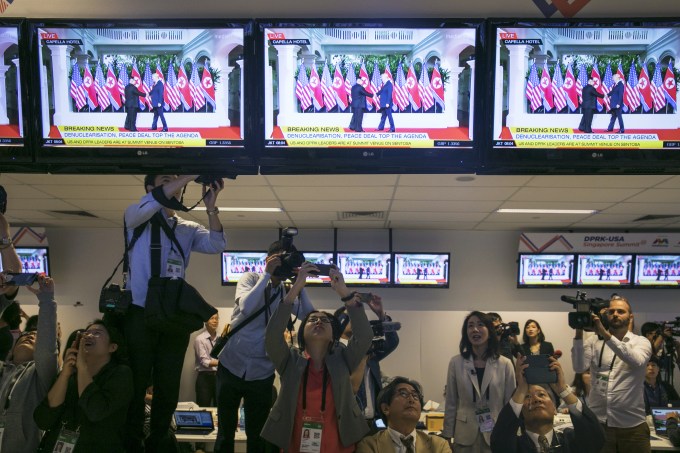 Journalists taking pictures of a TV screen of Kim and Trump. How is this journalism?

I have given a lot of thought to subscription models in media the past few weeks, arguing that consumers are increasingly facing a “subscription hell” and fighting against the notion that paying for content should only be the preserve of the top 1 percent.

Yet, if we want readers to pay for our content, it has to be a differentiated product. This makes complete sense to every participant in industries like music, or movies, or books. Musicians may cover other artists, but they almost invariably try to perform original music on their own. Ultimately, without your own sound, you have no voice and no fan base.

Nonetheless, I feel journalists and particularly editors have to be reminded of this on a regular basis. Journalists still cling to the generalist model of our forebears, rather than becoming specialists on a beat where they can offer deeper insights and original reporting. Everyone can’t cover everything.

That’s one reason why people like Ben Thompson at Stratechery and Bill Bishop at Sinocism have grown to be so popular — they do one thing well, and don’t try to offer a bundle of content in the same old way. Instead, they have staked their brands and reputations on their deep focus. Readers can then add and subtract these subscriptions as their interests shift.

The biggest block to improving this duplication is the lack of cooperation among media companies. Syndication of content happens occasionally, such as a recent deal between Politico and the South China Morning Post to provide more China-focused coverage to the U.S.-dominated readership of Politico. Those deals though tend to take months to hash out, and are often not ephemeral enough to match the news cycle.

Imagine instead a world where specialists are covering focused beats. Kim-Trump could have been covered by people who specialize in Singaporean foreign affairs (as hosts, they had the most knowledge of what was going on), as well as North Korea watchers and U.S.-Asia foreign policy junkies. Clearinghouses for syndication (blockchain or no blockchain) could have ensured that the content from these specialists was distributed to all who had an interest in adding coverage. No generalists need apply.

This isn’t an efficiency argument for further newsroom cutbacks, but rather an argument to use the talent and time of existing journalists to trailblaze unique paths and coverage. Until the media learns that not everyone can become a North Korea or Google expert overnight, we are going to continue to see warehouses and ballrooms filled to the brim with preening writers and camera teams, while the stories that most need telling remain overlooked.