If you’ve ever found yourself wondering why an app is requesting microphone access when there doesn’t seem to be any logical reason why it should need to snoop on the sounds from your surroundings, hold that thought — and take a closer look at the T&Cs.

Because it might turn out that spying is exactly what the app makers have in mind.

To wit: La Liga, an app for fans of Spanish soccer which has been discovered using microphone access combined with the precise GPS location of Android users to listen in on people’s surroundings during match times — in a bid to catch bars that might not have a license to broadcast the match being watched. 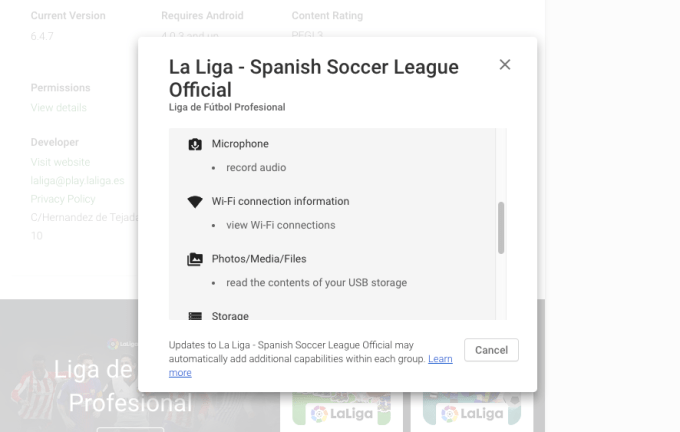 As surveillance capitalism goes, it’s a fiendishly creative repurposing of your users as, well, unwitting volunteer spies and snitches.

It’s also of course terrible human behavior. Behavior that has now garnered La Liga a bunch of one-star reviews for the Android app — along the lines of “this app converts you into a police whistler without you noticing!” and “it spies on you via the microphone and GPS. Rubbish. Don’t install”.

The snitch feature appears to have surfaced largely as a result of the European Union’s new data protection framework, GDPR — which requires app makers to explain more precisely what exactly they’re doing with people’s data. Ergo, La Ligo users started noticing what the app wanted to do and discussing and denouncing it on social media, where it blew up into a trending topic, as El Pais reports.

In a statement on its website responding to the snitch scandal, the league defends its actions writing that it has “a responsibility to protect the clubs and their fans” from unlicensed broadcasts being made in public places, claiming that such activity results in the loss of an estimated €150M annually from the league.

It also specifies that the feature is only deployed in its Android app — and claims it has apparently only been active since June 8. It also says it’s only used within Spain.

La Liga further claims the spying functionality is used solely for the purpose of detecting unlicensed broadcasts of soccer matches. (According to its explanation of how it works, captured audio is converted locally into an irreversible binary code — and it claims “the content of the recording will never be accessed”.)

A further technical measure implemented to limit how the feature can be used means La Liga only activates the microphone and geolocation of its app users’ mobile devices during time slots of matches in which its teams compete. So, tl;dr, the league is only spying on you to a timetable.

It also defends itself by claiming information about the spy and snitch function is provided to users in a transparent manner and people are specifically asked for their consent and can choose not to allow it or to revoke it at any time.

Although, the app’s description on the Google Play store does not include among several listed features — such as “live minute-by-minute commentary” and “schedules, scores, standings” and “real-time notifications and alerts right from kick-off” — ‘turning on your microphone to snoop on your surroundings during match times’… Funny that.

According to Google Play store stats the La Liga app has had more than 10M downloads to date.