Five years ago, Alexia Bonatsos, née Tsotsis, was co-editor of TechCrunch, a job that made her renowned in startup circles and familiar with a wide number of startups and their founders. What she really longed to do, in fact, was invest in some of them.

“I was among the first people to write about Pinterest and Wish — when it was known as ContextLogic — and Uber and Instagram and WhatsApp,” says Bonatsos. “I started to wonder if I was in the right place at the right time — so, luck — or if I’m in the right information flows. I was curious: What if I’d been writing checks?”

She talked occasionally with venture firms, but the right job didn’t materialize. So she set to work on creating her own dream job. Her first move was to step down from her post at TechCrunch in 2015 to enter into an accelerated, one-year master’s degree program at Stanford University’s business school. (“I wanted to be able to communicate in the same language” as other VCs, she says with a shrug.) All the while, and in the year afterward, she was talking with founders about how to tell their story and shape their editorial and convince people with large followings that they are worth tracking — skills Bonatsos had herself honed as a reporter.

She wasn’t building out her network merely to stay connected; she was also slowly piecing together checks from individual investors for a debut venture fund. Toward that end, last December, she registered her San Francisco-based firm, Dream Machine, with the SEC, listing the target amount at $25 million.

If she has reached or is nearing that number, she won’t say out of an abundance of caution around securities regulations. (This is what happens when business journalists become VCs.) Still, when we caught up with her recently, she disclosed that she has already made seven investments, including as part of one token sale. She also shared a bit about what they have in common, which seemingly centers on two things: they involve the ever-growing sharing economy, and they take advantage of an overarching trend toward decentralization. 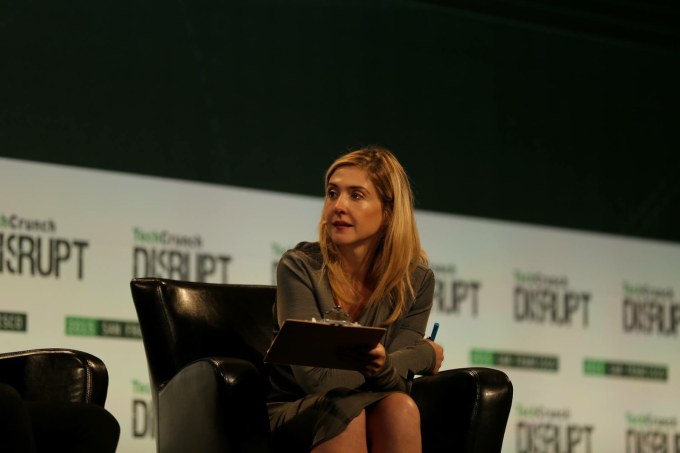 One of those bets, for example, is TruStory, which we’d written about earlier this week. Founded recently by an alumna of both Coinbase and Andreessen Horowitz, TruStory is creating a platform for users to research and validate claims that people make online, whether in a blog post, whitepaper, website or social media post. It’s creating a “real system of information hierarchy with the blockchain,” says Bonatsos, whose co-investors in the company include True Ventures and Coinbase co-founder Fred Ehrsam, among others.

Another of Dream Machine’s checks has gone to Omni, a four-year-old, San Francisco-based on-demand storage company that’s making every possession in one’s home rentable — giving members an opportunity to make money from their underused items in the process. By way of example, Bonatsos recently rented a dress that a fellow investor had worn once and stored away. Omni photographs each item and allows users to designate friends who can rent them. Users can also rent their belongings to strangers if they choose.

A third investment, in Fable Studios, perhaps best underscores Bonatsos’s ambition to invest in “founders who turn science fiction into non-fiction.” The startup — created by former members of the Oculus Story Studio team — took the wraps off what is essentially a studio for augmented and virtual reality content this year at Sundance, where it premiered one of its first projects: an animated three-part series called “Wolves in the Walls.” (You can check out the trailer here.)

The company hasn’t disclosed how much it has raised to date, but others of its investors include Shasta Ventures and founder-investor Joe Lonsdale.

Asked how she’s drumming up deal flow, Bonatsos suggests she isn’t shy about networking like a maniac. (We spied her at an industry event last night, in fact.)

She also points to the small but growing number of people who are similarly raising and managing funds as solo general partners, and who are forming collaborations and sharing lessons in the process.

Some of these include Product Hunt founder Ryan Hoover, who is currently managing Weekend Fund, a $3 million fund that has backed roughly 10 startups since last year; Niv Dror, an early Product Hunt employee who is now investing $3 million through a vehicle called Shrug Capital; and Boom Capital, which is a pre-seed fund for “deeply technical, under-networked founders” founded by Cee Cee Schnugg, who previously spent 4.5 years with Eric Schmidt’s Innovation Endeavors fund.

Yet a fourth new, seed-stage fund is 22nd Street Ventures, launched earlier this year by Katey Nilan, who’d spent the previous six years in a variety of marketing and public relations roles.

Whether all of these seed-stage funds, including Dream Machine, can survive, let alone thrive, remains an open question, of course. As a VC at a well-regarded seed-stage fund told us just yesterday, seed-stage funding is “insanity” right now, with so much capital in the ecosystem — between established seed funds, accelerator programs and so many burgeoning funds — that it’s growing harder by the day to obtain a meaningful stake in a promising new startup.

Bonatsos, who expects most of her initial checks to average around $300,000 and is willing to invest in both first-time and serial founders, doesn’t sound concerned.

She has her intuition, a vast network of founder contacts and support from fellow seed investors. She also argues that she’s prepared to invest much earlier than many others.

“I can suspend disbelief and get on board with a wild vision,” she says. As she knows, having been immersed in the startup universe for many years, “Non-obvious deals are where you make returns.”