Facebook today revealed that it’s chosen not to shut down all political ads because that could unfairly favor incumbents and candidates without resources to buy pricey TV ads. Instead, it’s now launching its previously announced “paid for by” labels on political and issue ads on Facebook and Instagram in the U.S. and its publicly searchable archive of all these politics-related ads that run in the U.S. That includes ads run by news publishers or others that promote articles with political content.

The labeling won’t just apply to candidate and election ads, but those dealing with political issues such as “abortion, guns, immigration or foreign policy.” Clicking through the labels that appear at the top of these News Feed ads will lead to the archive, which isn’t backdated and will only include ads from early May 2018 and after. The archive will hold them for seven years so they can be searched by keyword or the Page that ran them. It also will display the ad’s budget, and the number of people who saw it, plus aggregated, anonymized data on their age, gender and location.

Any advertiser that wants to run political ads must now go through Facebook’s authorization process that requires them to reveal their identity and location, and advertisers will only have a week’s grace period starting today before those unauthorized will have their ads paused. Facebook plans to monitor political ads with a combination of artificial intelligence and 3,000 to 4,000 newly hired ad reviewers as part of its doubling of its security team from 10,000 to 20,000 this year.

The reviewers and AI will analyze these ads’ images, text and the outside websites to which they point to look for political content. They’ll seek to avoid bias in classification by following guidelines on what constitutes one of 20 political issues from the decades-running Comparative Agendas Project. Users also may report unlabeled ads, which will then be reviewed, paused and archived if they’re deemed political. Their buyer will then be required to go through the authorization process before they can buy more. 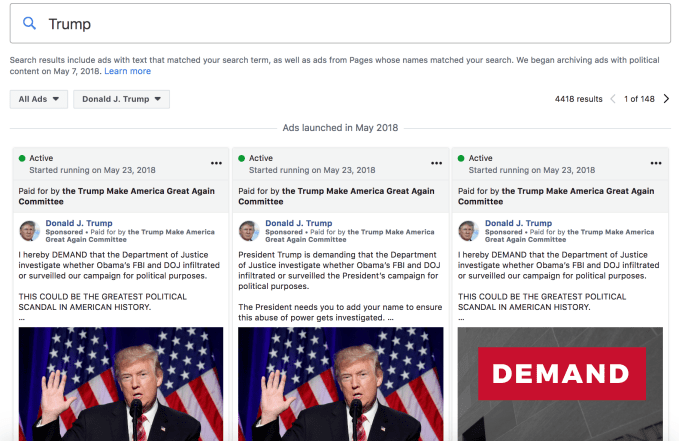 As part of work with Facebook’s new commission investigating social media’s impact on elections, it plans to provide a database available via a forthcoming API that will let watchdog groups, academics and researchers review how ads are being used. These tools will open to other countries in the following months, and Facebook plans to make all ads visible to everyone through a tool launching in June that’s now testing in Ireland and Canada.

Facebook’s chief product officer Chris Cox writes that “We hope that in aggregate these changes will be a big step to improve the quality of civic engagement in our products, and to keep the public discourse strong.”

Facebook held a conference call to discuss the launch with reporters this morning. Unfortunately it was timed to end just 15 minutes before the news went out, limiting the ability of journalists to write timely, in-depth coverage. You can listen to that call below:

While the labels and archive are good steps toward transparency, there are still a number of problems with the program. Most specifically, the political action committees and organizations that often fund political ads can have confusing or misleading names that obscure their true purpose. Simply listing those organizations in the Paid For By labels or archive won’t necessarily give users a lot of information about who the people behind the money are unless they’re willing to go digging across the internet themselves. 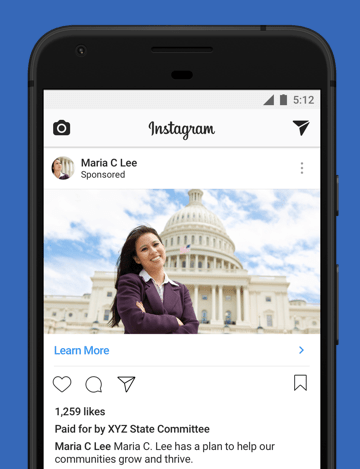 For example, the notorious conservative political donors the Koch brothers funnel cash through a PAC called Prosperity Action to fund Republican candidates like Paul Ryan. Seeing an ad was paid for by Prosperity Action wouldn’t immediately inform most Americans. On the other side, ads to displace Paul Ryan have been bought by a Page called Stand Up America, which many might not immediately know is an anti-Trump group. If Facebook wants to truly give citizens a better understanding of where these political ads come from, it needs to add more info about the donors and political leanings behind PACs and other big spenders.

[Update: After requesting clarification about exactly who and what should appear in the “paid for by” section of ads and the archive, a Facebook spokesperson told me that the Page admin who purchases the ad chooses who to disclose as having paid. Facebook requires that this disclosure info be complete and accurate, and that advertisers follow applicable laws. But that still seems to allow advertisers to cite some shell organization or donor group name that could obscure where the money really comes from.]

Another issue is who will have access to the archive API, since the Cambridge Analytica scandal all started with an academic researcher accessing Facebook data.

One interesting new learning from today is that news publishers’ articles that deal with political issues and are promoted in ads will need the disclosures too. “Any ad that has political content on Facebook going forward will require authorization, labeling, and archiving regardless of who’s running it,” said Facebook Director of Public Policy Steve Satterfield, who notes Facebook is in dialogue with different ad buyers “including news publishers.” While that might seem like overkill if The Wall Street Journal promotes a story regarding one of President Trump’s policy changes in hopes of adding subscribers, not supporting him, the genesis of highly partisan Facebook-specific news sources necessitates there be no loophole for avoiding labeling. 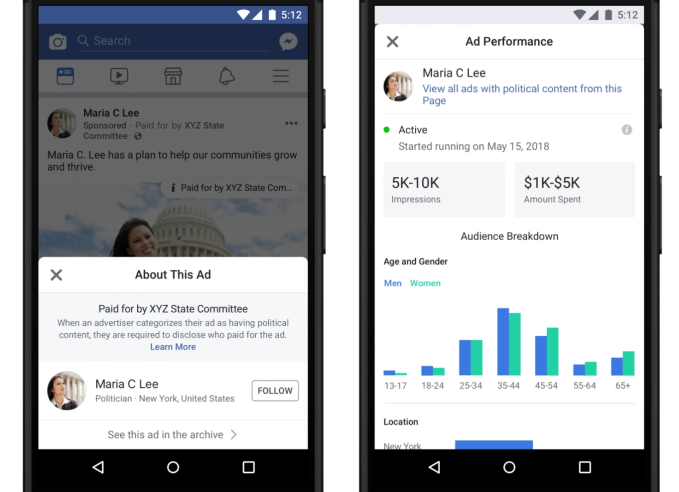 “We won’t always get it right. We know we’ll miss some ads and in other cases we’ll identify some we shouldn’t,” writes Satterfield and Facebook’s Global Politics and Government Outreach Director Katie Harbath. But Harbath described on the call how even though all the monitoring of political ads will cost more than the revenue the company earns from them, Facebook felt it necessary to “make sure people have a way to express themselves and engage in political discourse in a transparent way.”

Self-policing in this manner could reduce the urgency of calls to pass the Honest Ads Act that was unveiled last year to bring online advertising disclosures in line with those for television, though Congress has yet to hold a hearing about.

“These changes won’t fix everything, but they will make it a lot harder for anyone to do what the Russians did during the 2016 election and use fake accounts and pages to run ads,” CEO Mark Zuckerberg concluded. “I hope they’ll also raise the bar for all political advertising online.”

These are the exact kind of tools and labels Facebook should have offered as soon as it began touting its ability to influence elections with its ads more than a half decade ago. But with the mid-term elections approaching alongside races around the world, they’re better late than never.