Everence co-founder Patrick Duffy knows you might be skeptical about the company’s technology, which takes a DNA sample and uses it to synthesize a substance that can be added into tattoo ink.

In other words, you can have the DNA (and soon hair or cremated ash) from a loved one included in a tattoo on your body.

“There’s a definite ick factor [at first],” Duffy admitted, while others might find it “gimmicky” or think “it’s snake oil, it’s fake,” if they don’t take the time to learn more.

But Duffy said the idea behind Everence is to “give people a way to stay connected emotionally in a way that was permanent.”

“It all comes down to emotional connections, intangible links to the things that make us or break us,” he said.

Take Duffy’s co-founder Boyd Renner, who said he served 28 years in the Navy, but was ultimately most inspired by his wife, who has cystic fibrosis: “She does an hour and a half of treatments in the morning, but she still runs half marathons.” So Renner got an “everence” that incorporates his wife’s DNA into a tattoo design that combines elements of lungs, trees and roses. 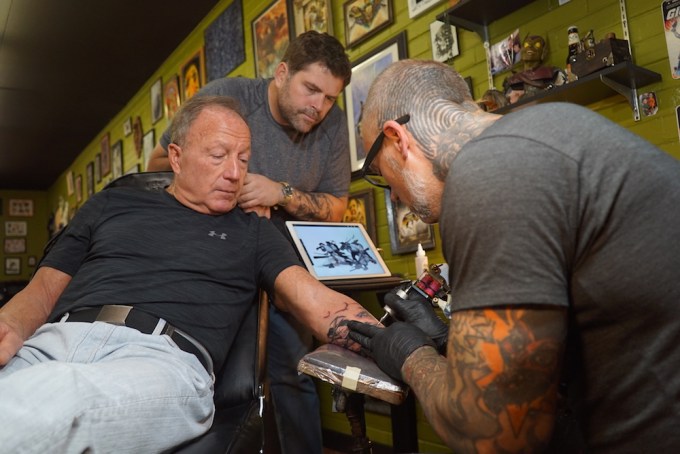 Or take Johnny Walker, a New York City police officer and 9/11 first responder who has been diagnosed with stage 4 colon cancer. Walker said that he used Everence technology to incorporate DNA from his family into tattoos, so that they could be with him as he undergoes chemotherapy.

“And if this life was going to take me somewhere else, I didn’t want to go there and be alone,” Walker said. “I wanted to have my family with me.”

As for the technology, Duffy noted that Everence is being advised by medical and scientific experts, including Bruce Klitzman, associate professor of surgery at Duke University, and Edith Mathiowitz, professor medical science and engineering at Brown University. He also said that while the FDA doesn’t systematically regulate tattoo ink, “We went ahead and proactively submitted to them.”

Synthesizing the DNA-based material was the “highest bar” technologically, Duffy said, as well as “the one we could build the strongest intellectual property protection bar around.”

As for using ash or hair, he said it’s “nothing new” to add ash to a tattoo, but many tattoo artists are understandably hesitant to do it. Duffy is hoping to address their concerns both technologically (by purifying the ash and reducing it to a uniform particle size) and economically (by offering insurance in case there are any issues). He’s also recruited a group of tattoo artists who can advocate for the product.

“It can be applied by any tattooer in the world, added in with any existing ink with no special equipment, training or materials,” he said. “It lasts forever.”

Everence’s synthesized DNA substance is currently available for preorder at a price of $295.