Although bitcoin and blockchain technology may not take up quite as much mental bandwidth for the general public as it did just a few months ago, companies in the space continue to rake in capital from investors.

This round vaults Circle into an exclusive club of crypto companies that are valued, in U.S. dollars, at $1 billion or more in their most recent venture capital round. According to Crunchbase data, Circle was valued at $2.9 billion pre-money, up from a $420 million pre-money valuation in its Series D round, which closed in May 2016. According to Crunchbase data, only Coinbase and Robinhood — a mobile-first stock-trading platform which recently made a big push into cryptocurrency trading — were in the crypto-unicorn club, which Circle has now joined.

But that’s not the only milestone for the world of venture-backed cryptocurrency and blockchain startups.

Back in February, Crunchbase News predicted that the amount of money raised in old-school venture capital rounds by blockchain and blockchain-adjacent startups in 2018 would surpass the amount raised in 2017. Well, it’s only May, and it looks like the prediction panned out.

In the chart below, you’ll find worldwide venture deal and dollar volume for blockchain and blockchain-adjacent companies. We purposely excluded ICOs, including those that had traditional VCs participate, and instead focused on venture deals: angel, seed, convertible notes, Series A, Series B and so on. The data displayed below is based on reported data in Crunchbase, which may be subject to reporting delays, and is, in some cases, incomplete. 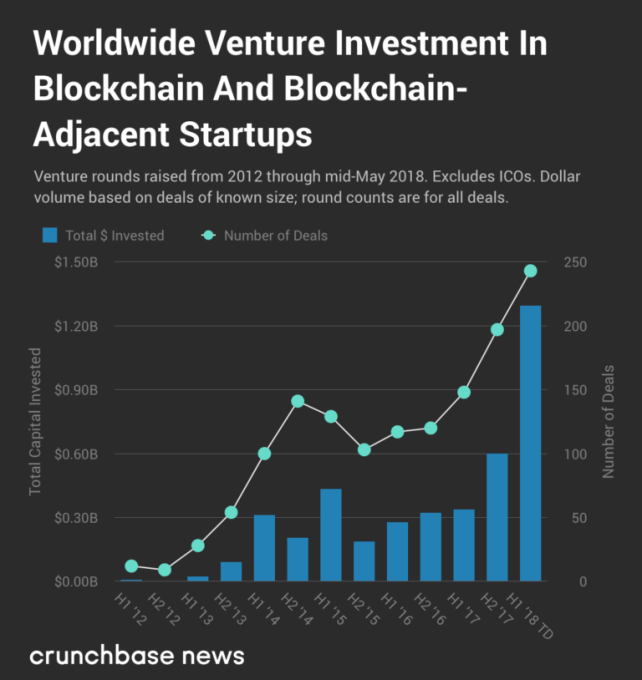 A little more than five months into 2018, reported dollar volume invested in VC rounds raised by blockchain companies surpassed 2017’s totals. Not just that, the nearly $1.3 billion in global dollar volume is greater than the reported funding totals for the 18 months between July 1, 2016 and New Year’s Eve in 2017.

And although Circle’s Series E round certainly helped to bump up funding totals year-to-date, there were many other large funding rounds throughout 2018:

There were, of course, many other large rounds over the past five months. After all, we had to get to $1.3 billion somehow.

All of this is to say that investor interest in the blockchain space shows no immediate signs of slowing down, even as the price of bitcoin, ethereum and other cryptocurrencies hover at less than half of their all-time highs. Considering that regulators are still figuring out how to treat most crypto assets, massive price volatility and dubious real-world utility of the technology, it may surprise some that investors at the riskiest end of the risk capital pool invest as much as they do in blockchain.

Like in our February analysis, we first created a list of companies in Crunchbase’s bitcoin, ethereum, blockchain, cryptocurrency and virtual currency categories. We added to this list any companies that use those keywords, as well as “digital currency,” “utility token” and “security token” that weren’t previously included in the above categories. After de-duplicating this list, we merged this set of companies with funding rounds data in Crunchbase.

Please note that for some entries in Crunchbase’s round data, the amount of capital raised isn’t known. And, as previously noted, Crunchbase’s data is subject to reporting delays, especially for seed-stage companies. Accordingly, actual funding totals are likely higher than reported here.