If there’s one thing I envy in the global spirit and character its the appreciation of a fine bidet. Hygiene being close to godliness, one can imagine the huddled scientists at CERN and KAUST and Tokyo University creating scientific marvels, secure in the knowledge that their posteriors were as clean and crisp as their lines of thought. The same can be said of peoples of all continents who celebrate the occasional fountainal intrusion, from those who use bidets complete with birdsong to hide their doings to those with a simple hose next to the can.

But America, that land of the free and the home of the brave, can’t join in the fun? Is there no bidet culture in Dear Columbia? Pshaw. After all, there’s something called Tushy.

This simple bidet system is the gateway drug to posterior enjoyment. I’ve been trying to install a proper bidet in my home since 2007. The problem I discovered was that the design of my toilet did not allow for something large and heavy up against the toilet tank. Because the system was so large I couldn’t fit it in place of the seat, resulting in endless heartbreak. I was almost going to swap out my toilet for one of a simpler designed but luckily the Tushy is the low-cost, low tech solution I was looking for.

It works by sitting in line with the tank refill line. You simply connect the line to the Tushy and then connect a line from the Tushy to the tank. The water that would normally go into your bowl is routed through a little movable nozzle and up into your backside. The water, obviously, is cold. You can also turn it so the water cleans the nozzle, and important health and safety addition.

Bear in mind that the Tushy is as simple as it gets. It doesn’t blow out fine perfumes, it doesn’t steam or mist you, and it doesn’t play birdsong. But it costs $69 and seems to work just fine in my testing. In fact, I’m thinking of Tushying up the whole house since it doesn’t actually need electricity or any plumbing changes.

Tushy also sells an $84 Spa model that connects to your hot water line for a bit of warmth. But that’s for the coddled few who can’t manage a little cold water. 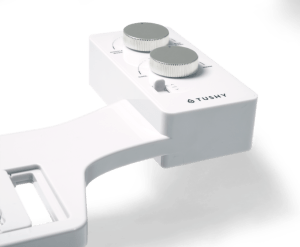 Why is this important? Because all innovation is important, for one. The changes in lifestyle associated with tech are moving out of the esoteric into the basic, a fact that should give us all a bit of a giggle. If electrified scooters in SF are a sign of the apocalypse, things like the Tushy are a sign of a renaissance. After all, the clean innovator is the happy innovator.

Ultimately ideas like Tushy will lead us to a new world of butt hygiene. Perhaps, one day, all of us will have a bidet in our homes and offices. Perhaps one day we will be able to break the shackles of toilet paper. And perhaps, one day, we will join the ranks of men and women who enjoy a good squirt in the morning. Until then, Tushy does its business.