That focus on hearing users’ concerns prompted today’s change. Have a bad Uber ride when you’re busy and you might neglect to rate the driver or accidentally rush through giving them 5 stars. Forcing users to wait until a ride ends to provide feedback deprives them of a sense of control, while decreasing the number of accurate data points Uber has to optimize its service.

I had just this experience last month, leading me to tweet that Uber should let us rate trips mid-ride:

Uber & Lyft could let us rate drivers mid-ride, but only apply the ratings 5 minutes after a ride ends in case something goes better/worse before the end of the trip.

Uber apparently felt similarly, so it’s making an update. Starting today, Uber users can rate their trip mid-ride, providing a star rating with categorized and written feedback, plus a compliment or tip at any time instead of having to wait for the trip to end. “Every day 15 million people take a ride on Uber. If you can capture incrementally more and better feedback . . . we’re going to use that feedback to make the service better,” says Deng. Lyft still won’t let you rate until a ride is over.

Specifically, the data will be used to “recognize top-quality drivers . . . through a new program launching in June,” Uber tells me. “We’re going to be celebrating the drivers that provide really awesome service,” Deng says, though he declined to say whether that celebration will include financial rewards, access to extra driver perks or just a pat on the back.

But Uber will also now use the feedback options that appear when you give a less-than-perfect rating to tune the technology on its back end. So that way, if you say that the pickup was the issue, it might be classified as a “PLE – pickup location error,” and that data gets routed to the team that improves exactly where drivers are told to scoop you up. To ensure there’s no tension between you and the driver, Uber won’t share your feedback with them anonymously until the ride ends.

I asked if reminding users to buckle their seat belts would be in that Safety Center and Uber tells me it’s now planning to add info about buckling up. It’s been a personal quest of mine to dispel the myth that professionally driven vehicles are invulnerable to accidents. That idea, propagated by heavy-duty Ford Crown Victoria yellow cabs piloted by life-long drivers in cities they know doesn’t hold up, given Ubers are often lightweight hybrids often operating in places less familiar to the driver. 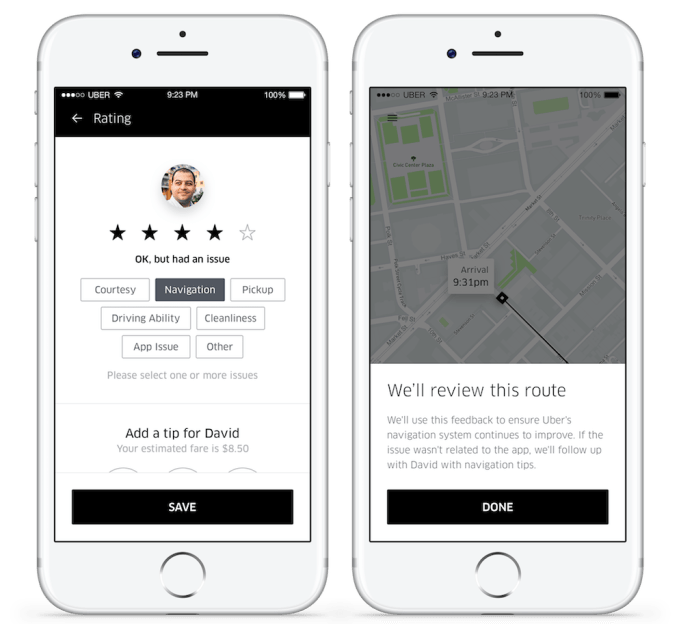 The launch follows the unveiling of Uber’s new in-app Safety Center last month that gives users access to insurance info, riding tips and an emergency 911 button. After a year of culture and legal issues, Uber needs to recruit users who deleted it or check an alternative first when they need transportation.

Enhanced safety and feedback could earn their respect. As competition for ride sharing heats up around the world, all the apps will be seeking ways to differentiate. They’re already battling for faster pick-ups and better routing algorithms. But helping riders feel like their complaints are heard and addressed could start to work some dents out of Uber’s public image.